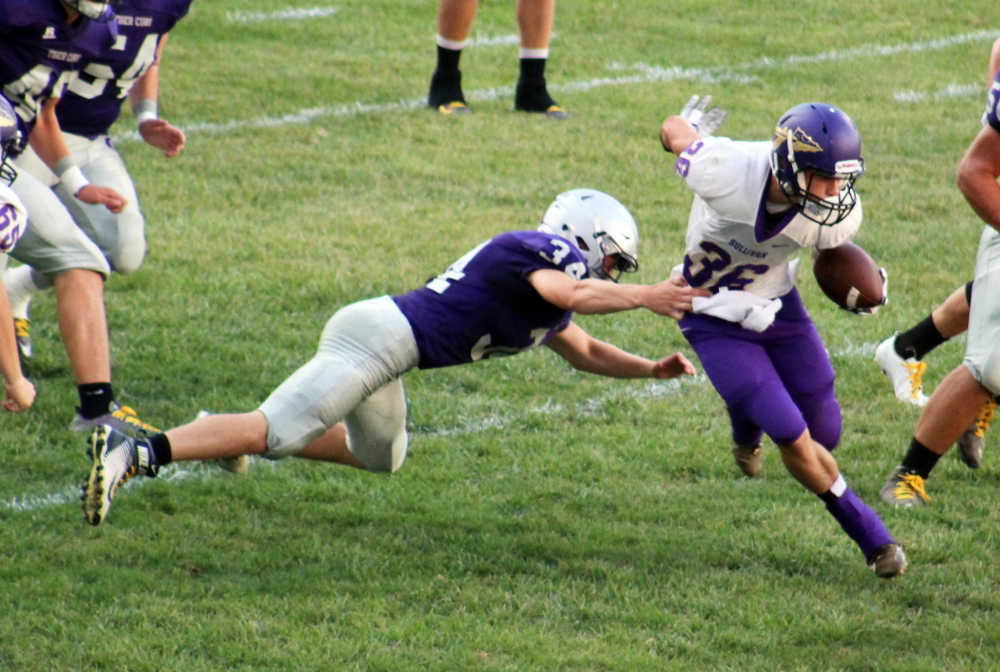 Greencastle’s Tiger Cubs entered Friday night’s game with Sullivan rated statistically as one of the top defenses in the state, allowing less than seven points per game.

The Tiger Cubs had not yet run into an offensive juggernaut like the Golden Arrows, who entered the game averaging nearly 39 points per game.

The no-huddle, shotgun offense with five talented receivers spreading Cub defenders all over the field won out easily, as the Golden Arrows scored the final 27 points of the game to record a 41-10 Western Indiana Conference victory.

Arrow quarterback Jack Conner, who had completed 73 percent of his passes in the team’s first five games, hit that mark exactly in this game by connecting on 17 of 23 passes for 275 yards to five different receivers.

The Cubs got on the scoreboard first in the first quarter on the second play after action resumed following two long lightning delays.

The Arrows took over at their own 28 after the kickoff, and drove 72 yards for a score with Wes Bedwell scoring from six yards out for a 7-3 lead.

After Greencastle’s next drive ended on downs, the Arrows took over at the Cub 46 and scored nine plays later as Conner took it in from four yards out for a 14-3 lead.

The Tiger Cubs hung tough, using three Damon Moody runs and a pair of Brayden Baxter completions to score in just six plays. Alex Costin caught a 27-yard aerial from Baxter with 1:59 left in the half to cut the deficit to 14-10.

The backbreaking play of the night then came as it seemed the Arrows were running out the clock. Faced with a third-and-14 from their own 34 with 52 seconds left, Conner hit Dakota Caton on a short pass that the elusive speedster turned into a 66-yard score to give the Arrows a 20-10 halftime lead.

Greencastle was done scoring for the night, and the Arrows added three more scores in the second half to break the game open.

“Their skill kids are very, very good and they took advantage of some of our weaknesses,” Greencastle coach Mike Meyer said. “Our kids battled as hard as we could. That was a very good football team.”

Meyer acknowledged that the big pass play was very costly for his team, which had been gaining momentum.

“We couldn’t really get a stop in the second half, and they kind of took advantage of what we had and what we couldn’t do. We learned some things about our teams, and we have to step up.

“We have some young ones who have to learn, and they will,” he said. “We’ll get there.”

The road doesn’t get much easier for the Cubs next week, as they travel to a Northview team which lost a one-point heartbreaker at Sullivan earlier this season.

“We just have to bounce back,” Meyer said.

The Arrows added two more Bedwell scores in the second half, one on a 9-yard pass from Conner and the other on a 2-yard run.

Sophomore Jakeb Skinner added the final Sullivan TD as both teams played reserves over the final half of the fourth period.