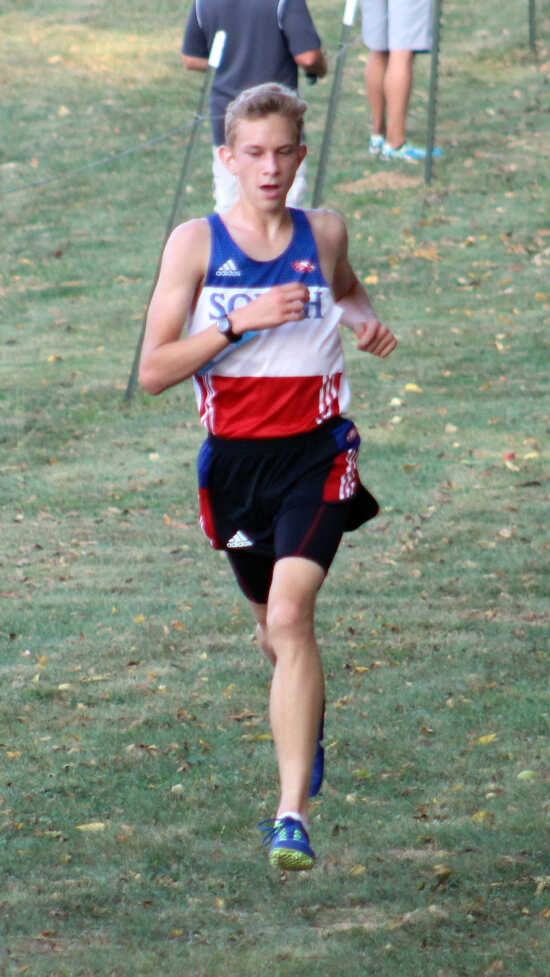 Besides that one point, though, it was a great night for the Eagles.

“Overall it’s hard not to be pleased with how things went,” said Welti, whose teams won both team titles and placed the top two individual runners in the boys’ race plus the second-place runner in the girls’ event. “ Going into the meet, the goal for each team was to win.  Time didn’t matter to us, especially considering the heat and the fact that WIC is on Saturday.”

According to school records, Welti said this year is the first time since 1996 and only the second time ever that SP won the boys’ and girls’ meets in the same year.

For the Eagle girls, this was their first win at county since 2005.

“It was nice to finally end that skid,” Welti said. “We wanted to run a conservative first half and then run hard enough to win during the second half.  Both groups did a great job of executing that plan.

“The guys won it for the second year in a row, and that’s a streak we hope will continue for a few more years.”

Austin Rumley and Karl Egold went 1-2 for the Eagles in the boys’ race.

“Seeing them comfortably cruise to a 1-2 finish was great, and the guys’ pack is incredible,” Welti said. “Steven Schnepp has been running with real determination lately, and it’s great seeing his improvement and maturity here in recent weeks.

“Having Michael [Crossman] back and seeing him work his way to All-County was great.”

Welti said it was “cool and frustrating all at the same time” to see that the Eagles had three guys competing for the final All-County spot.

Crossman nosed out teammates Andrew Carr and Dru Bottorff for the final spot in the stop seven.

“On the one hand they are each happy for their teammate, yet they are also disappointed that they didn’t get it,” he said. “That competition is great, and they do a good job of working with and encouraging one another.”

Welti noted that Eric Hinkle has had some ankle issues, but is getting healthy and working his way up to that pack.

“Those guys did a great job of executing their race plans and getting the win,” Welti said.

Welti noted that Chelsie Edwards had a very specific goal in mind as she earned her third straight all-county berth.

“Chelsie took off from the start with her eyes on second place, knowing that there’s no touching Emma,” he said. “Chelsie kept contact the entire time, battling through the heat and staying in a position to allow her to use her excellent speed at the finish.

“Sure enough, she closed that last 400 really well and made up a seven-second gap to get second.”

Greencastle’s Sydney Kallem finished third behind Edwards, before the next three spots were claimed by Eagles Lexi Vanihel, Lillie Stein and Ally Nichols.

“They all packed up and just kept it on cruise control,” Welti said. “I really enjoy watching them race, and having Lillie up there now really makes them an intimidating pack. Any given day, any one of them, along with Chelsie, could be leading our team.  That’s going to be huge down the road.”

Welti also thought Samara Young did a great job of running people down over the last 1.5 miles, and noted that she moved up at least 10 spots in the final mile to “close the door” and help give the girls the win.

“She’s had some injury issues to overcome, and as she gets healthy, she’ll continue to improve and move up on the pack,” he said. “Rachel Jones also had a strong race and got in front of some important people to help pad our score.  It was great to see how well they all went out there and executed their race plans.”

Welti is looking forward to Saturday’s conference meet at Cascade, and plans to have his team just keep doing what has been so successful.

“We’re trying not to overthink things heading into Saturday,” he said.  It’s really easy to get anxious and overly-concerned with a meet like conference, but we know that the best thing to do is to just stick with basics and remain disciplined with the little things. Homecoming this week is kind of unfortunate timing for us, yet at the same time it serves as a good distraction to prevent us from dwelling on the upcoming meet.”

Cloverdale’s Andy Tyler was pleased to see his boys’ team do well in the team standings in the county meet.

“The boys’ team achieved its goal of placing second,” he said. “Abel Bates and Eddie Mannan really pushed themselves, and their efforts cemented our place.”

Rylan Hall and Lily Monnett each earned all-county honors for the Clovers.

“We are obviously proud to have two all county runners with Lily and Rylan,” Tyler said. “Macie [Couch] was so close with her eighth-place finish.  She gave it everything she had.

“We are looking forward to the WIC and sectional meets.

“I’m glad we got a baseline time in on this course since we’re running sectionals here,” Lutes said. “The kids are excited also to get back to Cascade for conference this weekend. They’re definitely ready for a break from the heat. We look forward to some strong races Saturday.