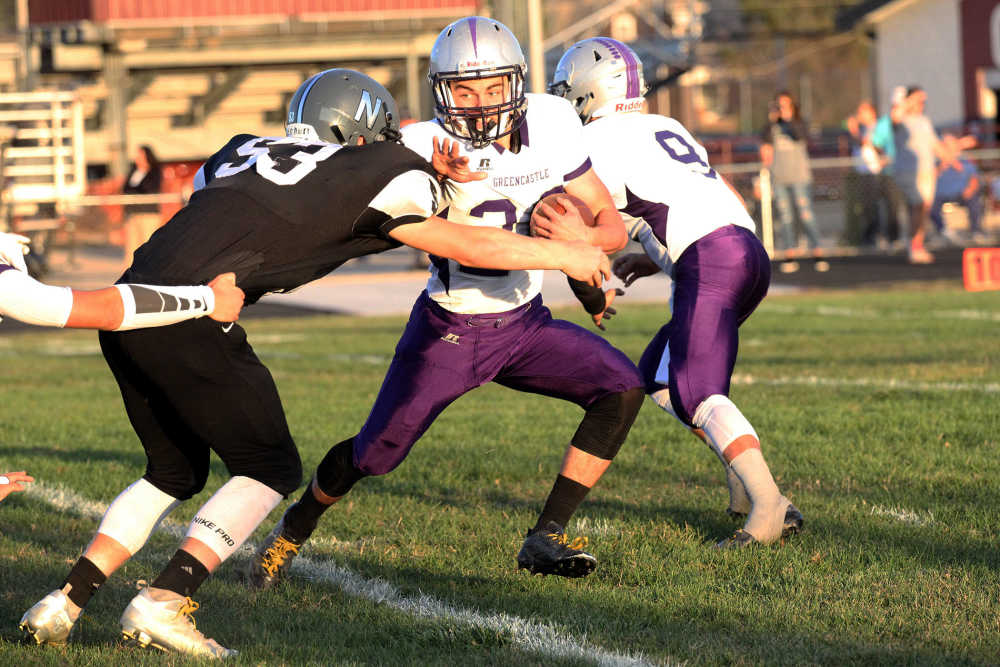 Greencastle's Damon Moody (No. 20) powers ahead on his way to a 158-yard rushing night with a touchdown on Friday.
Carey Fox photo

There were four lead changes in the second half of the game. However, it was the final one that determined the outcome as the Knights drove 52 yards in 39 seconds as Dylan Boor kicked a 31-yard field goal as time expired to give Northview a 22-20 victory.

The win improves to the Knights to 5-2 overall as Greencastle falls to 4-3 this season.

A rather pedestrian 7-7 first half didn’t belie the fact that the second half would provide plenty of fireworks the rest of the way.

Northview took the lead in the third period as quarterback Trey Shaw aired out a 27-yard touchdown pass to Trevor Cook for a 13-7 lead after the extra point was blocked by the Tiger Cubs. However, as the Tiger Cubs did all night, they went to their powerful run game to respond.

Greencastle marched 65 yards in just six running plays as fullback Gavin Bollman powered in from 13 yards out to put the Tiger Cubs ahead 14-13.

Northview had very little success with its run game that came in averaging 244 yards per game. Greencastle held the Knights to just 15 rushing yards on 33 carries.

“That is the strength of their team is their front seven on defense,” Northview coach Mark Raetz said of the Tiger Cubs. “Most of them are back from their 9-2 team a year ago. We felt like we were going to have to throw the ball to win, and that is kind of the game plan that we stuck with.”

After the Tiger Cubs had taken the lead heading into the fourth quarter, the Knights went to work.

Shaw was sacked by the Tiger Cub defense for a 16-yard loss as Northview faced a third-and-19 situation. Shaw bombed a pass to Cook for a 36-yard gain and a first down. Several plays later, the Knights faced third-and-17, but it was Shaw finding Cook for a 24-yard gain to the Greencastle three-yard line. Greencastle caught Brylar Metz on a reverse for a 13-yard loss and set up a fourth-and-goal from the 20-yard line. Again, Shaw let a throw fly to the corner of the end zone as Metz hauled in a 20-yard TD with 8:47 left.

Looking to run the clock out with less than two minutes remaining in the game, Northview went to its run game. However, Greencastle forced a fumble and recovered at the Knights’ 12-yard line to breathe new life into the team.

Bollman ran in for his second score to cap an 80-yard rushing night to put Greencastle ahead 20-19 after the two-point conversion failed.

Northview ran the kickoff back to its own 34-yard line and had just 34 seconds to work with.

Shaw rolled out and whipped a 37-yard strike to Cook into Greencastle territory and stopped the clock by spiking the ball. Two incomplete passes later, the Knights were facing fourth-and-10 and Shaw completed a short pass to Michael Heading, who did the rest for a 15-yard gain to the Greencastle 14-yard line and a first down with a few seconds remaining.

Raetz called Boor’s number as the Knights lined up and the junior kicker booted the game-winner as time expired.

In the first half it was Moody who put the Tiger Cubs ahead on a 46-yard TD run in the first quarter. The Knights answered after Braddok Whistler recovered a fumble in Tiger Cub territory.

Shaw finished with 223 passing yards on 13 completions with two touchdowns.