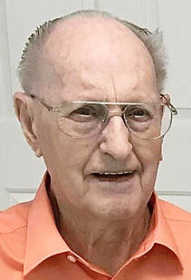 He was educated in the Harmony school system.

He served in the United States Navy during World War II as a torpedo man in the Pacific from the summer of 1943 until the end of the occupation in Japan.

Joe married the love of his life, Marilyn Marie (Albright) Mathis, on June 9, 1947. The two celebrated their 70th wedding anniversary this year surrounded by loving family and friends. He survived her by two weeks, she having died on Sept. 22, 2017.

Joe attended Heating and Air Conditioning School in Chicago on GI Bill benefits and then returned to Brazil, choosing to work first for Curtiss Candy Co., then PalmerÆs Tavern as a bartender. He later worked at Home Packing Co. in Terre Haute as a routeman. His next employment was in punch card production at the IBM Greencastle facility.

Since childhood, Joe had longed for an opportunity for a career in commercial art. He completed a home-study course in commercial art at his own cost and was then transferred to the Art Department at IBM Greencastle to be a graphic designer for the company. He worked in that capacity until he retired.

He and Marilyn lived in Mission, Texas, in the winters after retiring but moved to Texas full-time in 2001. They resided there until their deaths.

ōGrandpa Joeö was known for being astute, wise, no-nonsense and a life-long learner. He enjoyed painting watercolor landscapes, traveling to auto races, playing cards, bowling, square dancing and watching baseball and basketball. He took particular pride in his grandchildren and their activities and was a devoted grandfather who always had a twinkle in his eye. He was not quick to show emotion, but when he did, he had an infectious laugh and mischievous smile.

Even in his later years, Joe was technologically savvy and enjoyed teaching his family to use a computer. When a struggle loomed or help was needed, he commonly had a plan ready to use, and his knack for passing on practical knowledge and advice will be appreciated for many years to come.

Services are under the direction of Ric Brown Family Funeral Home of Mission, Texas.