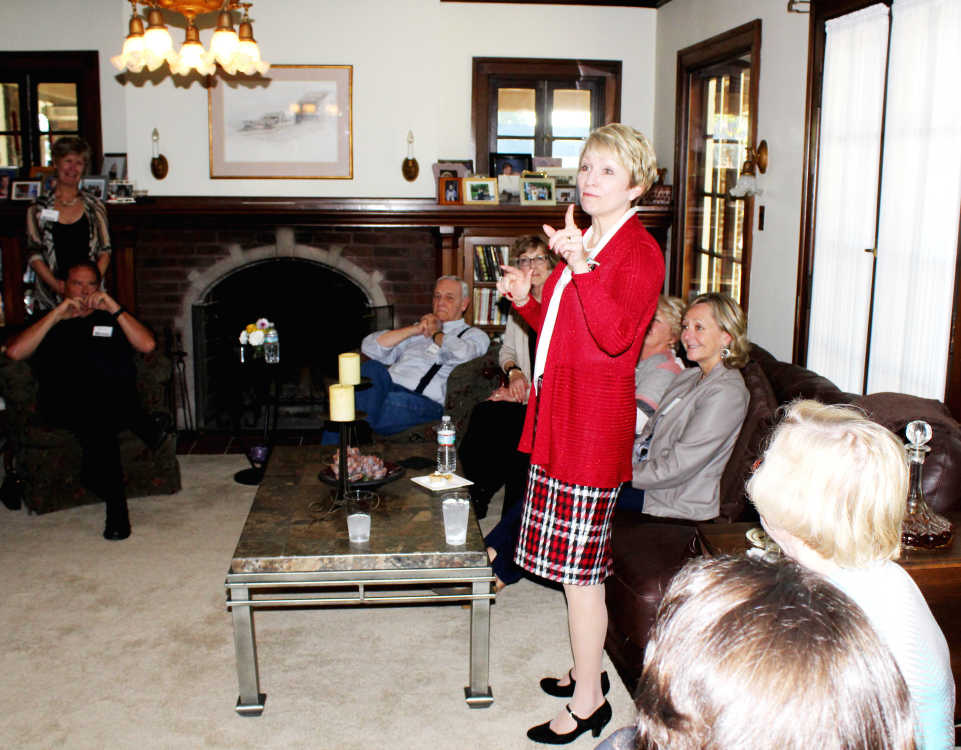 In the living room of the Dave and Sue Murray residence recently, Ivy Tech President Sue Ellspermann lauds the accomplishments of the Associate Accelerated Program -- or ASAP -- at the Ivy Tech Greencastle campus.
Banner Graphic/ERIC BERNSEE

Both Ivy Tech President Sue Ellspermann and Chancellor Kathy Lee were on hand at the home of Dave and Sue Murray to help celebrate the ASAP program that offers an affordable associate’s degree that can be achieved debt-free in 11 months for less than $10,000.

And while they said wonderful things about the program, important things about Indiana and valuable things about education, it was what students in the ASAP program had to say that captivated the crowd.

One of the first nine ASAP students graduating the program last May, South Putnam High School product Lewis Baker said what initially attracted him to the program was the cost.

“You really can’t beat it,” he said of a program that after completion a student can transfer his or her credits to a four-year school, where he or she can finish a bachelor’s degree in just two more years.

Now studying environmental management at Indiana University, Baker isn’t lost on the big campus or over his head in the classroom. Quite the contrary.

“I think ASAP really overprepared me,” he said, indicating that after being immersed in 30 credit hours with ASAP in Greencastle, taking 16 credit hours at IU Bloomington is no problem.

“I’m bored,” Baker smiled. “People in my dorm are telling me they wish they’d known about ASAP and could go back in time and take it.”

Another South Putnam product, Logan Taylor, meanwhile, is a current ASAP student who remembers how excited she was in learning about the program.

“I couldn’t believe how practical it was,” she said. “I couldn’t wait to go home and tell my mom about it.

“My plans are much, much more attainable and affordable with ASAP.”

The local ASAP coordinator, Amanda Ostoich, called the program a great place for students to grow without getting behind in the classroom or in their finances.

Dave Murray, who along with wife Sue already endows a Murray Scholarship for the program, made another generous gesture, announcing that they would match the first $15,000 in gifts to the Greencastle ASAP program.

“The program is really serving the needs of this region,” he said. “The word is getting out.”

Murray also reported that enrollment in the ASAP program at the Greencastle Ivy Tech has more than doubled in a year, going from nine to 20 students.

Meanwhile, Ellspermann noted that Indiana has adopted the Lumina Foundation goal in which by 2025 it pledges that 60 percent of the workforce will have a post-secondary education.

Currently the state workforce is at 41 percent, she said, which means the workforce will need a million more degrees by 2025 to reach 60 percent.

“So that’s a big challenge there,” she said, indicating the state will be pushing for 50,000 degrees or credentials a year to catch up.