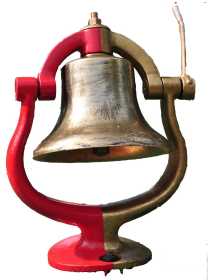 One month after detailing a plan in which it would close a major portion of South Jackson Street -- including the section in which the VFW post lies -- for the Monon Bell football game on Veterans Day, Nov. 11, DePauw University asked to rescind that request.

In a brief appearance at Thursday night’s Greencastle City Council meeting, DePauw Public Safety Officer Charlene Shrewsbury walked to the podium to say she was appearing on behalf of DePauw athletic director Stevie Baker-Watson and tersely stated that the university wanted to “formally rescind” the South Jackson Street request.

At the Sept. 14 City Council session, Baker-Watson had requested closing South Jackson Street between Seminary and Berry streets for the period 8 a.m. to 5:30 p.m. before, during and after the Saturday, Nov. 11 Monon Bell football game between DePauw and Wabash College.

Baker-Watson told the Council that a crowd of 8,500 is anticipated for the annual rivalry game, and many of those spectators will be crossing Jackson Street on foot, creating a safety concern if traffic were to continue at its normal pattern.

The request was approved by the Council but met with quite a bit of negative reaction on the Banner Graphic website and elsewhere.

The Seminary-to-Berry closing had actually represented a condensed version of what had been presented to the Main Street Greencastle group earlier. The initial proposal was to shut down South Jackson between the square and Veterans Memorial Highway.

Thursday night after the latest City Council meeting Mayor Bill Dory told the Banner Graphic that the issue had been “taken care of” by DePauw and the VFW following some additional analysis of the situation. Traffic will be monitored and pedestrians assisted in crossing the busy roadway but Jackson Street will not be closed.

“There will be rolling stops,” Council President Adam Cohen interjected. “An analogy would be like the Fourth of July where they stop traffic on U.S. 231 to get people across the road after the fireworks.”

Mayor Dory noted that DePauw is also working with INDOT to have signs placed on the square to encourage through traffic to use U.S. 231 and not South Jackson Street, especially just before and right after the Monon Bell game.