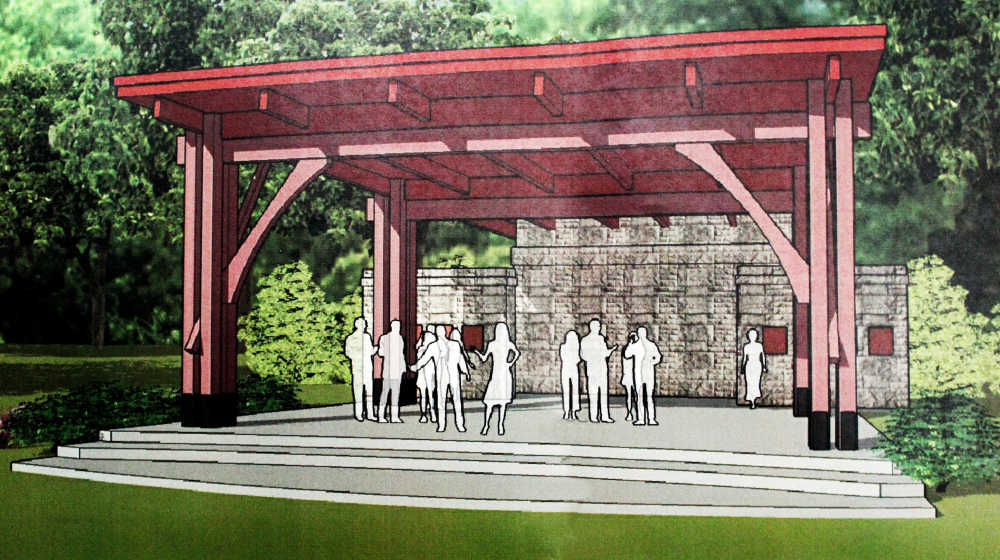 Taking design cues from the covered bridges that dot the West Central Indiana landscape, the proposed look for the new Robe-Ann Park bandshell was recently lauded by Greencastle Park Board members.
Courtesy photo

With a design inspired by covered bridges around the area, the proposed new Robe-Ann Park bandshell appears to be a hit with Greencastle Park Board members.

For the second straight month, Jessica Hartman, president of the Friends of the Park group that is spearheading the bandshell replacement project, made a presentation at the Park Board’s monthly meeting. This time the latest architect’s drawing presented a cleaner, all-wood covering and supports very much resembling the design of a covered bridge.

The committee was also inspired by a bandshell in the Chicago suburb of Barrington.

Meanwhile, the bandshell backdrop is now designed as a wall of limestone. Originally there had been discussion of the support posts possibly being limestone part of the way up, thus paying homage to the limestone posts at the park entrances.

However, that was never part of the architect’s drawing, Hartman noted.

The back side of the limestone backdrop could be used to display plaques celebrating major donors similar to the Heritage Wall in downtown Greencastle, it was suggested.

The bandshell, as drawn, offers a 1,300-square-foot stage area between the columns with even more space by using the risers/steps out front.

“I like it,” Park Board member Cathy Merrell offered. “I can’t wait to use it.”

“I like it, too,” ex-officio board member Wayne Lewis agreed, wondering what the cost figure might be.

Hartman said that is still to be determined as she awaits a final cost figure from the architect.

More than $100,000 has already been committed to the effort to build the new bandshell, including major donations from such groups as the Greencastle Civic League and the Putnam County Convention and Visitor Bureau and a $50,000 grant from the Indiana Office of Tourism Development and Indiana Office of Community and Rural Affairs.

Next month the Park Board is expected to get a chance to review construction drawings.

The schedule calls for groundbreaking in the spring. The four corners of the new bandshell site are currently staked out at Robe-Ann Park at the new location up the hill and to the north of the previous spot.

Construction is scheduled for next spring with completion hopefully by June 1 in order to coincide with the beginning of the annual Parkfest concert series sponsored by the Civic League.

That is important, Weinschenk has said, because 2018 marks “25 years that the Civic League has been sponsoring it.”

The proposed bandshell will replace the old structure built in 1976 for the American bicentennial and later named in honor of Greencastle native Bob Flanigan of the legendary 1950s and ‘60s singing group, The Four Freshmen.

The new bandshell will not carry Flanigan’s name, Hartman said.