City to benefit from AEDs, police and fire radios 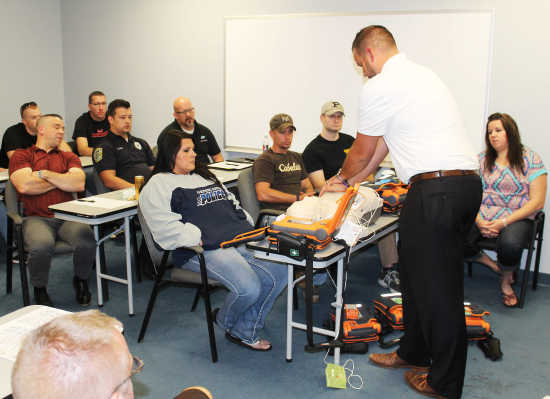 Troy Pflugner of Cardiac Science conducts a training session for Greencastle City Police personnel recently on the new Automated External Defibrillators (better known as AEDs) devices the city has purchased for the department. The city recently purchased 10 of the lifesaving units overall, five for GPD, two for the fire department and one each for City Hall, the City Garage and the Water Department.
Banner Graphic/ERIC BERNSEE

Police and firefighters boldly walk among as lifesavers. And now, in Greencastle, they carry life-saving apparatus with them.

The city also acquired AEDs for City Hall, the Water Department and the City Garage. 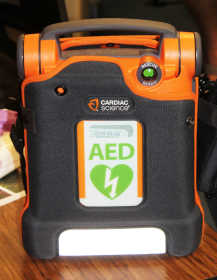 What is an AED? It is a portable Automated External Defibrillator used to restart someone’s heart in the event of sudden cardiac arrest (SCA).

Cardiac Science Senior Area Manager Troy Pflugner recently conducted an afternoon training session for Greencastle Police personnel, noting that “60 percent of the time when someone gets to go home (after a heart attack) it’s because of a police officer.”

“You guys get there first,” he told officers assembled in the GPD squad room. “It’s a story that needs to be told 10 times over.”

For GPD, four of the new devices will go into the cars of supervisors -- Capts. Charles Inman and Chris Jones and Sgts. Ed Wilson and Eric Vaughan -- with the fifth new device kept housed at GPD.

Two older units that had been in the cars of Inman and Jones will be refurbished and kept in the squad room, where officers can check them out, Chief Tom Sutherlin said. That way there will be two AEDs on the street at any given time.

AED benefits have been described as:

-- Reliability: The AED is rescue ready when needed.

-- Simplicity: Almost anyone is considered capable of using the AED.

-- Reassuring: The AED knows when to (and when not to) deliver the shock so users don’t have to worry about “doing it right.”

-- Comprehensive: The AED text screen is helpful in noisy and chaotic environments.

Meanwhile, the city has also been able to purchase 27 new fire radios and 25 new police radios to replace the Motorola units that are going out of date.

The city will spend $313,619 in LOIT (Local Option Income Tax) funds to pay for the purchase.

Chief Sutherlin told the Board of Works at its recent meeting that Motorola is allowing the city to trade in its old radio at $550 per radio, saving the city thousands of dollars in the process.

The number of radios will cover fulltime police officers and firefighters, along with reserves.

The fire radios are bigger, more durable and more expensive, it was noted, because of the nature of the environment in which they might be utilized.

They also come in the color lime green, Chief John Burgess pointed out, because it is the lowest point on the color spectrum that the human eye can detect, undoubtedly important in a smoke-filled room.

Installation of the radios will necessitate a $1,430 cost for the police units through JTN Services, while fire personnel will do their own installation.