"There is a tremendous need for a common sense approach to fix the broken system in Washington. We need new leaders in Washington who will stand up for West Central Indiana and actually get things done for the American people," Baird said.

Baird currently serves as state representative from District 44 and had previously served as a Putnam County commissioner prior to his election to the Indiana House of Representatives. 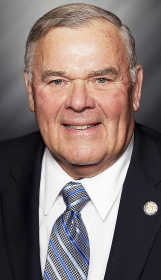 "I want every American to have the opportunity to enjoy success, prosperity and freedom," Baird said. "A limited government approach, rooted in constitutional principles, will be what preserves the American dream for the next generation of this wonderful country. I look forward to listening to the concerns of my fellow citizens in District 4 and the opportunity to win grassroots support throughout West Central Indiana.

"We have real challenges facing our country and the career politicians in Washington have failed the American people with all talk and no action," Baird continued. "President Trump needs reinforcements to pass his America First agenda and drain the swamp. I will stand with the president and fight to end the political class' grip on power in Washington.

Baird has called West Central Indiana home his entire life. He is married to his high school sweetheart, Danise, and they reside in Greencastle. He and his wife are the proud parents of three children, all graduates of Purdue University. Baird owns and operates Baird Family Farms and a Home Health Care Agency, which he runs with his wife and two sons, Stacey and Beau.

Baird is a decorated Vietnam veteran, serving as a first lieutenant in the United States Army, and was awarded a Bronze Star with V device and two Purple Hearts.

Baird obtained Bachelor of Science and Master of Science degrees from Purdue University and a doctorate from the University of Kentucky. He worked for the Cooperative Extension Service as a livestock specialist. He later served as an animal nutritionist for a large multi-state feed manufacturer.