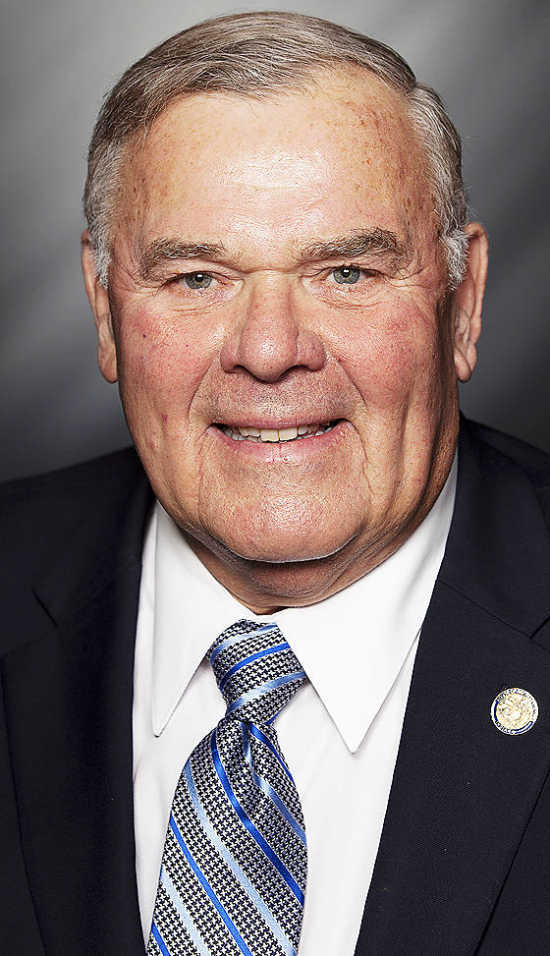 Calmly leaving behind the virtual sure thing of victory in the ultra-Republican 44th Statehouse District, Jim Baird Thursday opted instead for a run at the GOP nomination in Indiana's 4th Congressional District.

Last fall Baird easily won a fourth term representing west-central Indiana in the Statehouse -- and more than likely could have named the number of terms he wanted to serve before calling it quits in the General Assembly -- but instead announced he was tackling the bigger challenge of trying to succeed Todd Rokita in serving the 16-county 4th District in the U.S. Congress.

It won't be an easy road to victory with four GOP primary opponents already lined up.

"I understand that," Baird said of his big step Thursday in an interview with the Banner Graphic. "It's kind of unpredictable."

He also is stepping out of his west-central Indiana comfort zone should he win, being required to spend considerable time in Washington, D.C., and other locales.

"You bet it took a family decision," he said of the agreement to go for it. "I could not have done it without family input."

"There is a tremendous need for a common-sense approach to fix the broken system in Washington," he said. "We need new leaders in Washington who will stand up for west-central Indiana and actually get things done for the American people."

The Greencastle legislator had previously served as a Putnam County commissioner prior to his election to the Indiana House of Representatives in 2010.

He said he's proud of what Indiana has done and thinks it could serve as a model for how America should operate.

"The thing I see," Baird said, "is I've really been proud of the team we've put together. We've created a positive business climate in Indiana and we've done some things for education that will benefit the future of our children. We've balanced the budget, which I've been very firm about, and we've done things for our veterans."

Those are the kinds of things, Baird stressed, that he can help share with to America "to get things going."

"As you know," he added, "I have a tremendous amount of appreciation for this country and what it stands for, and I want to be sure that we preserve that."

While the sprawling 4th District might seem an imposing challenge from its size, it feels like home to Baird.

"I really feel like (District) 4 is just an extension of 44," he said, "with a lot of rural, small towns and counties like Tippecanoe and Hendricks and Montgomery. "I really feel living here all my life I understand this district, and I can make sure the people in west-central Indiana have a voice at the legislative table."

The same should be true across the country, he noted. "I want every American to have the opportunity to enjoy success, prosperity and freedom," Baird continued. "A limited government approach, rooted in constitutional principles, will be what preserves the American dream for the next generation of this wonderful country. I look forward to listening to the concerns of my fellow citizens in District 4 and the opportunity to win grassroots support throughout west-central Indiana."

He said America has "real challenges" facing the country and the "career politicians in Washington have failed the American people with all talk and no action."

A decorated Vietnam veteran, Baird served as a first lieutenant in the United States Army and was awarded a Bronze Star with V device and two Purple Hearts.

After working for the Cooperative Extension Service as a livestock specialist, he later served as an animal nutritionist for a large multi-state feed manufacturer.

Baird is married to his high school sweetheart, Danise, and they reside in Greencastle. He and his wife are the parents of three children, all graduates of Purdue University. Baird owns and operates Baird Family Farms and a Home Health Care Agency, which he runs with his wife and two sons, Stacey and Beau.

Greencastle's Jim Baird appears to be joining a crowded field in the race for the District 4 seat in the U.S. Congress that is being vacated by Todd Rokita in his quest for a U.S. Senate seat.

Baird Thursday became the fifth announced Republican contender for the seat, while at least three Democrats already have their sights on the May 2018 primary as well.

Two of Baird's GOP opponents are former aides to Mike Pence when the vice president was governor.

Steve Braun, who formerly served District 24 in the Indiana House from 2012 though November 2014, was later the head of Indiana Workforce Development but has resigned that post to concentrate on the congressional race. Diego Morales, another District 4 hopeful, is also a former Pence aide.

Also announced as candidates for the 4th District congressional seat are Kevin Grant of West Lafayette, who lost the GOP primary to Rokita in 2016, and Army veteran Jared Thomas.

Of course, the official election filing period won't even open until Jan. 10 (running until noon Feb. 9). The last time the 4th District seat was open, there were 13 primary candidates on the GOP ballot.

On the Democrat side, candidates Joe Mackey and Sherry Shipley, both of Lafayette, and Tobi Beck of Avon have announced. All three have already been campaigning in Greencastle, Mackey several times.