After 27 years, on to other things 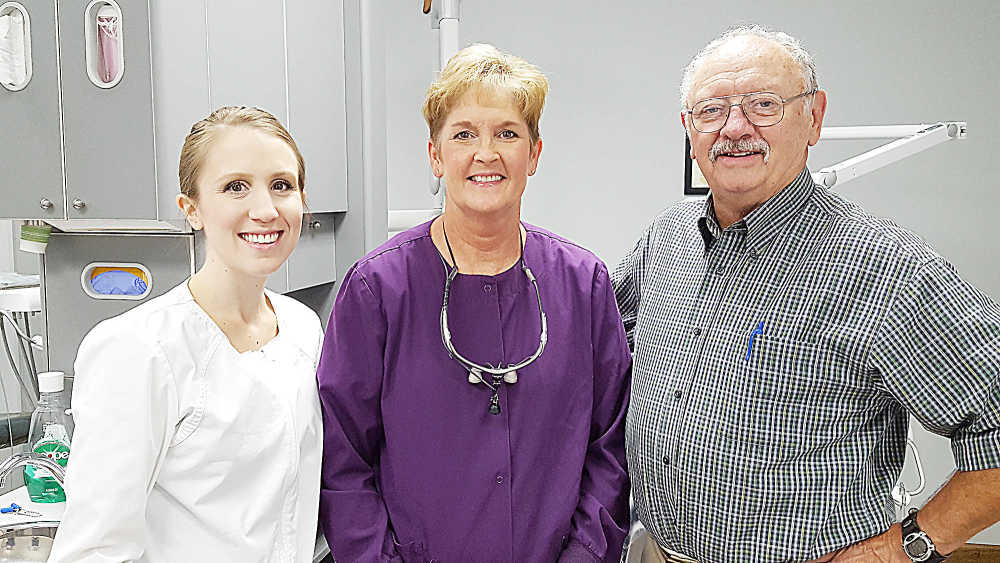 Courtesy photo Wished well in her new endeavor by her two bosses over the last 27 years, dental hygienist Twyla Rader (center) prepares for her new job as a teacher at the Indiana University School of Dentistry. Rader worked for 26 years for Dr. Perry Wainman and for the last year for Dr. Elizabeth Kirsch, after she bought Wainman’s practice.

Leaving behind a pair of bosses who have the highest praise for her, dental hygienist Twyla Rader is moving on to the next phase of her career.

Rader has spent the last 27 years of her career in Greencastle, spending most of it employed by Dr. Perry Wainman and then the last year for Dr. Elizabeth Kirsch, who purchased the 18 E. Washington St. practice from Wainman in 2016.

For several years, Rader has been teaching part-time at the Indiana University School of Dentistry. Her plan was to begin teaching full-time eventually.

“I knew there were going to be some positions opening so I got my master’s degree,” Rader said.

The full-time positions opened sooner than expected, so Rader is making the move now, with her final day set for Thursday, Nov. 2.

“I’m not leaving her because of anything else,” Rader said. “I love Greencastle. I probably know more people here than I know in Hendricks County.”

She still remembers the first time she made what has become a daily commute from Danville to Greencastle.

“Doc (Wainman) just said, ‘Come on over,’” Rader recalls, and he eventually got her to agree. “I walked in the door and he said, ‘When can you start?’ That was a Thursday and I started on Monday.”

“We’re easy here in Greencastle. Her voice just sold me,” Wainman says, joining the story with a chuckle.

“You were just desperate for a hygienist,” Rader corrects.

And while the plan wasn’t necessarily to stay for 27 years, Rader enjoyed her time with Wainman and her patients.

“There were so many times people would say, ‘You want to come work here?’ I’d say, ‘I just want to stay with Doc,’” Rader said. “I’ve got good patients.”

The May 2013 fire that gutted the practice made for some tense moments for Wainman and all his staff, but Rader was among those who didn’t waver, moving temporarily into rented space just up the street, before the return to a shiny, new practice at the old location in July 2014.

“When Doc moved back over here he said, ‘What are you gonna do?’” Rader said. “I said, ‘I’m not going to leave you until you retire.’”

That has now happened, at least mostly.

When Wainman announced he had sold the practice to Kirsch last year, he said he would be gradually stepping away from the business.

Now that Wainman has “one foot out the door,” Rader feels comfortable leaving.

It also doesn’t hurt that Rader feels the practice is in a good place.

“Dr. Kirsch has things under control,” Rader said. “She’s been here more than a year.

“I think everybody is in good hands here.”

Rader’s position has already been filled — by one of her former students, no less.

Lacey Laney, a licensed dental hygienist who lives in Putnam County, will be joining the practice.

Kirsch expressed her gratitude to Rader, who even helped pick Laney has her replacement.

“Twyla really cares about her patients,” Kirsch said. “I’ve heard a lot of compliments. She does quality work but she also cares. She’s their friend.”

Rader credits that ethic to Wainman.

“I think one thing Doc always emphasized — and I felt strongly about — is the patients always come first,” Rader said.