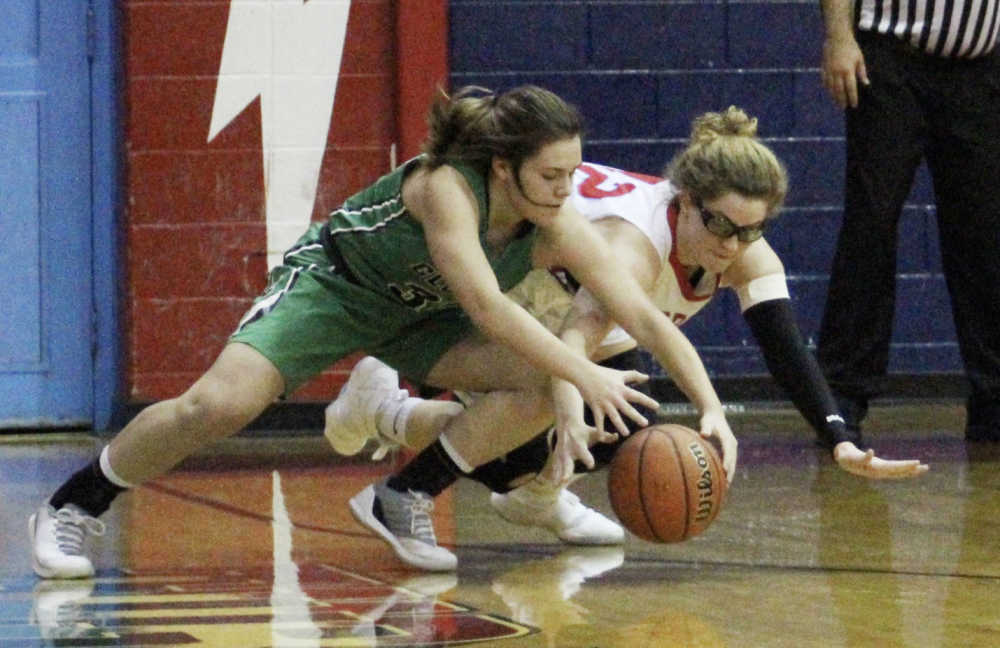 Already battling hard in the first game of the season, Hailey Thomas of Cloverdale (left) and Rebecca Snodgrass of Turkey Run go after a loose ball Tuesday at Turkey Run.
Banner Graphic/JOEY BENNETT

MARSHALL — Cloverdale proved to be a scary opponent for Turkey Run in the Halloween night season opener in girls’ basketball, as the Clovers defeated the Warriors 85-20.

Turkey Run actually scored the first four points of the game before the Clovers got untracked and scored the next 20 points.

Doing much of the damage in that stretch was senior guard Abby Walker, who hit four straight 3-pointers from long range and added a basket to cap a personal 14-0 run.

“You could tell, it was the first game of the year,” Cloverdale coach Matthew Langdon said. “There were things we had worked on defensively and in our halfcourt set that didn’t happen like we wanted to. We were hoping for no nerves, with a somewhat inexperienced group, but there were definitely some nerves to shake out in that first quarter.

“As they got into the game, they started knocking down some shots.”

Walker had 24 of her game-high 27 points in the first half, deferring to others in limited playing over the final two quarters with a 45-10 halftime lead.

“It’s great to see her get on fire like that early,” Langdon said. “She shot some of them 5-6 feet behind the line, and she can win some games on her own. It’s great to see the team get behind her and cheer her on.

“The others started to hit some shots as the game went along,” he added. “Our bench players came in and played well.”

Cloverdale held a 20-6 lead after one quarter, and increased that margin to 28-8 before going on a 17-0 run. Arianna McCracken and Hailey Thomas each had two baskets in that run, with Walker adding a two and a three.

The Clovers took advantage of double-digit turnovers by the outmanned Warriors, who are playing their final season in light blue and red before consolidating with Rockville to form Parke Heritage High School next year.

Sammie Shrum scored five early points in the third quarter as Cloverdale built its lead to as much as 60-14 and led 66-19 at the final stop.

The worn-out Warriors, who only listed seven players on their varsity roster and have only 13 players in the program, only managed one point in the final period as a the Clovers added 19 more points.

“We’ve really been working on the fast break,” Langdon said. “Some of the secondary type of stuff, and we got some of that. We started moving the ball around pretty well in the second quarter on the break.”

He knows his team will have to step it up on Friday at Riverton Parke, one of the state’s most successful Class A programs in recent memory.

“The blueprint is there for an improvement from last year, we just didn’t get everything we wanted in this game,” he said. “Riverton Parke doesn’t have [Tayler] Vauters [the school’s career scoring leader] any more, but they have been winners for a long time and you can’t replace that. They just have a winning mentality.

“We’ll have to get back at it to get ready for them.”

Combs had a double-double with 20 points and 13 rebounds, while Shrum added 12 points and McCracken had eight.

Next game — Cloverdale (1-0) plays at Riverton Parke on Friday.