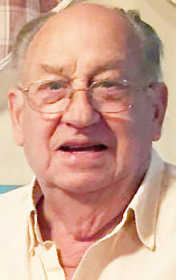 He was born July 31, 1937 in Sullivan County, the son of John M. Treadway and Inez Mae Lucas Treadway.

He attended school in Hymera.

As a young boy, he worked for Texas Oil Co. He later began working as a truck driver. He worked for several companies through the years, but worked for Schwerman Trucking in Greencastle for a number of years. He last worked for Paul Larr Trucking in Lewis, retiring in 2002.

He has enjoyed retirement spending his mornings at the 3rd Generation, having coffee with friends and driving his golf cart around Clay City. He especially enjoyed the time of the Pottery Festival being with friends and family. He has made woodworking pieces for family and fishing was a pastime as well.

Services will be conducted at 7 p.m. Sunday at Schoppenhorst Funeral Home, Clay City, with Pastor Mark Messmer officiating. Visitation will be from 5-7 p.m. at the funeral home. Cremation was chosen with burial at a later date in Wilford, Ind.