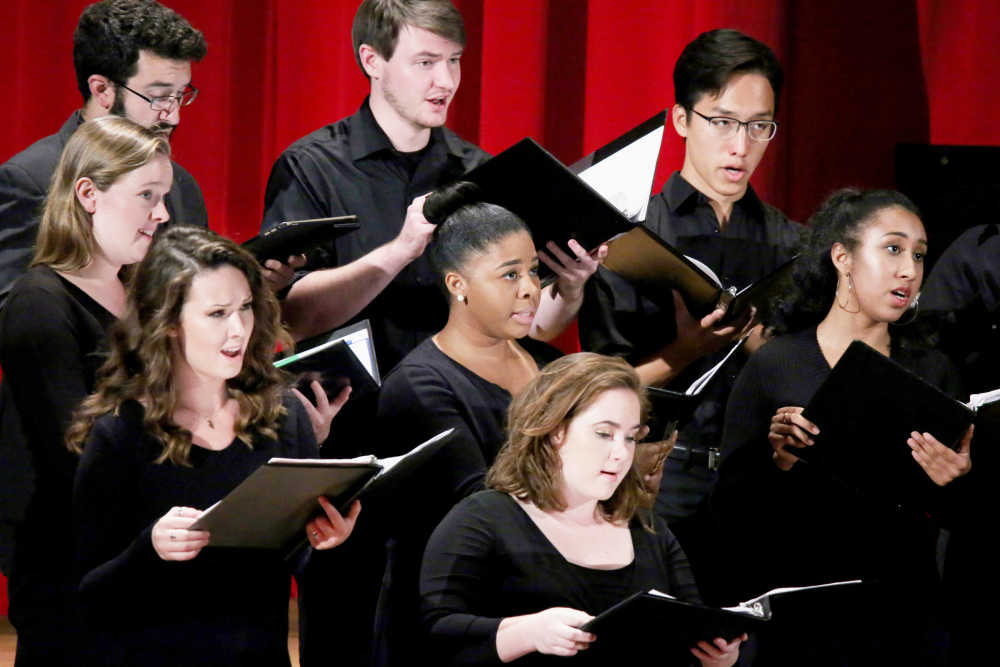 Courtesy photo A collaborative choral concert featuring the DePauw Chamber Singers (pictured), University Choir and faculty and students of Modern Languages will conclude DePauw University’s ArtsFest 2017. The combined performance, “In the Beginning Was…,” will be given at 3 p.m. Sunday, Nov. 5 in the Green Center’s Kresge Auditorium.

The performance will be presented at 3 p.m. in Kresge Auditorium at the Green Center for the Performing Arts located on the DePauw campus.

Sunday’s choral concert, titled “In the Beginning Was…,” will open with the contemplative, Medieval strains of the “Stabat Mater” of Jacopone da Todi.

“This literary monk is considered the originator of Italian poetry,” says Boerger, “from which tradition so much important vocal music has arisen — most notably madrigal and opera.”

Collaborating with the choristers on the first half of the program will be DePauw faculty members Cristiana Thielman and Francesca Seaman and students of Modern Languages, who will be featured in dramatic orations and new translations of classic Italian poems to be sung in Renaissance polyphony by the University Chorus. The vocal ensemble will follow with Frank Ferko’s setting of Padraic Pearse’s “The Mother,” extracted from his “Stabat Mater,” closing out the set with a presentation of Richard Peaslee’s “Miracolo d’amore,” a seven-movement cycle of contemporary settings of classic madrigal texts.

The DePauw Chamber Singers will shift the focus to the Spanish poetry of García Lorca in four settings by Finnish composer Einojuhani Rautavaara, then turn to German Romantic verse in Brahms’ beloved “Fünf Gesänge.” These poems will be orated by German students of Professor Inge Aures.

Opening and closing the final set and the festival will be jaunty tunes of travel: the seafaring song “Ayo visto lo mappamundi,” from the mid-15th century, and J. David Moore’s funky arrangement of “The Rock Island Line,” made famous by Leadbelly.

Admission is $5 to the collaborative choral concert with free tickets for seniors, children and students.

For online purchases, visit music.depauw.edu. The GCPA box office is also open Monday, Wednesday and Friday from noon to 4 p.m. and 90 minutes prior to ticketed performances.