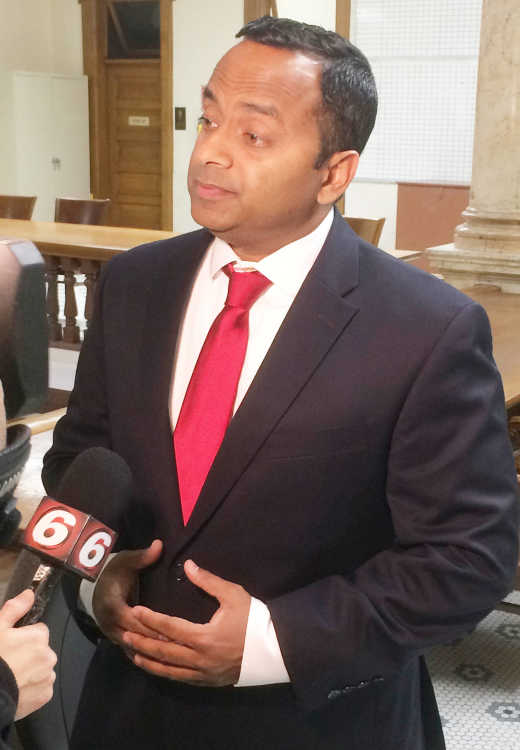 It was 1998. Few people even had cellphones. Fewer yet knew how to text.

But after the last successful theft of the Monon Bell, then-Wabash College student Mario Massillamany couldn’t wait to call his mother and tell her about it.

“I remember calling my mother just so excited,” the Fishers attorney told the Banner Graphic after Friday’s court hearing, “and all she did was cry.”

That’s because while her son was having what he believed to be the single greatest day of his life -- being involved in planning and carrying out the theft of the symbol of the great rivalry between his school and DePauw University -- all his dear mother was seeing was gloom and doom.

Being involved in the theft was sure to ruin Mario’s career, his mother thought. He’d thrown his life away. He was surely going to jail and ending up with a criminal record, never getting in law school and never getting a job.

Of course, none of that happened, and for a while he and the seven other Sigma Chis involved in the Halloween heist were Wabash celebrities for pulling it off.

“We hid in the rafters of the men’s bathroom (in the Lilly Center),” recalled Mario who is representing Mason Simmons, one of four Wabash men charged in the recent failed theft attempt. “We literally hid until 1 o’clock in the morning. We had timed the security guards and knew when they were at the furthest part of campus.”

Then they just loaded up the Monon Bell at that point -- no sensors or video cameras then -- and took off with it.

“We had three cars take off in three different directions,” Mario said of a plan straight out of the movies.

But it was late at night and police can be suspicious of any vehicle at that hour, and Mario’s car was apparently no different that night.

“Police actually followed me out of Greencastle,” he said. “They never pulled me over though. I was shaking the whole time and I was scared to death.”

Mario recalls a triumphant return to Crawfordsville where the Monon Bell was later hidden 10 miles away at the Sigma Chi cook’s house near Darlington.

ESPN even had a little fun with the prank, he said, taking a tour of the frat house and letting the camera peer into closets and dark spaces while asking “Could the Bell be in here?”

But all that ended by mid-week when word came down that if the Bell were not returned by Wednesday of game week, Saturday’s Monon Bell Classic would be canceled.

Memories like that came immediately rushing back to Massillamany when he took a phone call from Simmons’ family after the Oct. 19 incident that resulted in Class A misdemeanor criminal trespass charges for the four Wabash men.

“When one of the parents called me,” he noted, “I said, ‘I’ll do it for free.’ I just felt like I needed to try to give something back.”