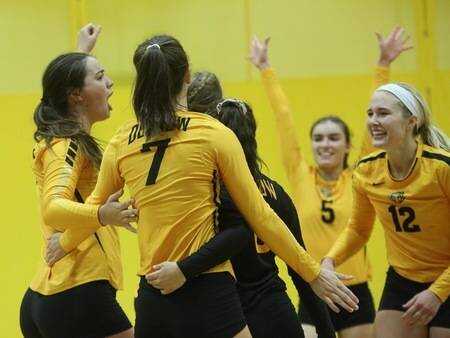 DePauw is headed to the NCAA tournament again.
DePauw photo

Following a 20-7 regular season and a second-place finish in the North Coast Athletic Conference, the DePauw volleyball team earned an at-large berth in the NCAA Division III Volleyball Championship.

The Tigers open play against Ohio Northern (27-5) in a first-round match on Friday at 5:30 p.m. at Otterbein University in Westerville, Ohio.

“This morning was maybe the longest wait ever to find this out, and we are over the moon ecstatic,” coach Deb Zellers said on Monday, after her team learned its fate. “I think we have more volleyball left to play in us. We didn’t end on the way we wanted to in our conference championship, so to have an opportunity to come back and play again and show everybody the type of team we have is truly an awesome opportunity.”

The Tigers are making their seventh overall appearance in the Championship after advancing to the second round last year.

DePauw has earned berths in the four of the last five tournaments.

Wittenberg improved to 22-2 and earned the conference’s automatic qualification into the Division III postseason.

In the opening set DePauw led by as many as four points on multiple occasions before Wittenberg drew even at 13-13.

The teams were tied three more times in the set before Wittenberg gained the lead for good with back-to-back points to make it 18-16.

Wittenberg led by as many as six in the second set before DePauw put together an 8-2 run to even the set at 18-18. The hosts scored the next two before

DePauw scored four straight with the final two coming on Morgan Stearley kills to give DePauw a 22-20 advantage.

Coming out of a timeout, Wittenberg regained the lead with three straight points.

Three more ties followed before DePauw had a chance at set point, but Wittenberg responded with two kills. The set ended in Wittenberg’s favor after a DePauw attack error.

In the third set, Wittenberg scored the first six points and DePauw was no closer than two the rest of the match.

Suzanne Peters led DePauw with 15 kills and a .324 attack percentage, while Liv Hartman followed with 10 kills.

Keegan Kollias assisted on 33 of the Tigers’ 44 kills, while Kaylee Nichols served a pair of aces. Peters led with 19 digs with Morgan Stearley and Haley Bitzer each totaling two block solos.

Maddie Foscher had a team-high 14 kills for Wittenberg, thile Madison Manger led with 18 digs. Aubrey Cox and Fischer led the way with three block assists each.

Peters and Stearley were named to the all-tournament team.

Outside hitter Suzanne Peters of Homestead and right side Morgan Stearley of Northview were among seven chosen to the first team.

Middle hitter Haley Bitzer of The Netherlands, and setter Keegan Kollias of Zionsville earned spots on the second team.

Bitzer is the NCAC’s top blocker with 1.11 per set and she’s seventh with a .261 hitting percentage. Kollias leads the league with 10.91 assists per set and was a second-team selection last year.

Sophomore outside/middle hitter Liv Hartman of Danville rounded out DePauw’s selections as an honorable mention choice. Hartman is fourth in the NCAC in kills (3.45/set) and 15th in hitting percentage (.231).

Stearley opened the week with nine kills and 10 digs in a 3-0 win over Ohio Wesleyan.

She then combined for 35 kills and 26 digs over the weekend at the Washington (Mo.) Baden Invitational, highlighted by posting a double-double with 13 kills and 12 digs in the 3-2 win over No. 12 WashU on Friday.

In the four matches combined, Stearley totaled 43 kills and committed just nine errors in 99 total attempts for a .343 hitting percentage.