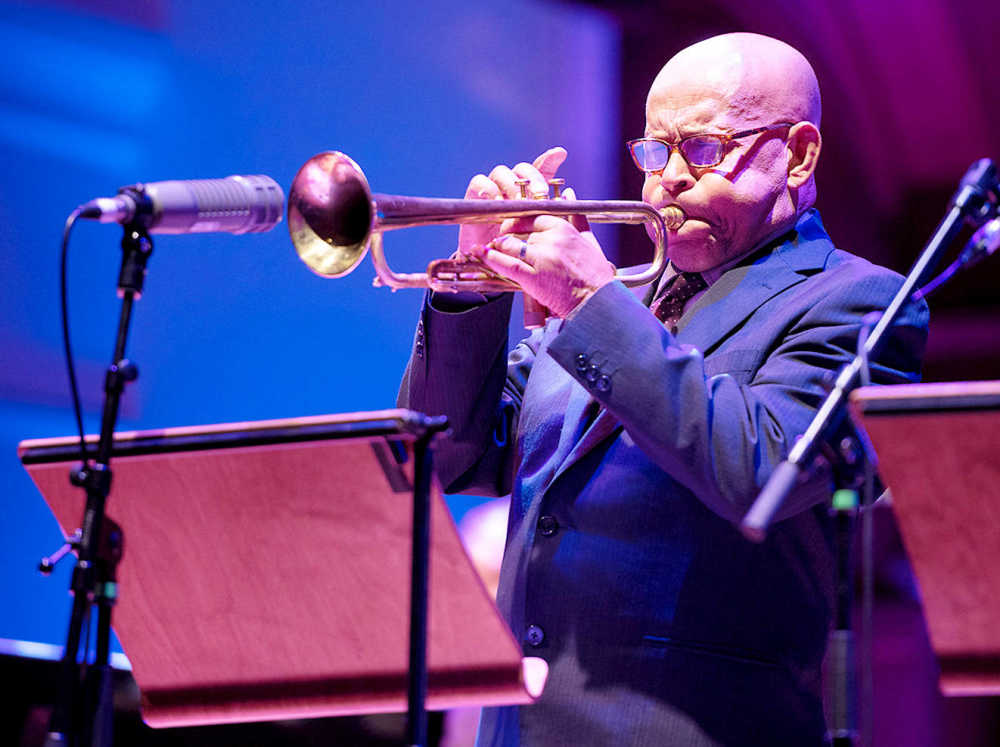 The great trumpeter Eddie Henderson will headline the DePauw School of Music’s Jazz Festival Saturday, Nov. 18. High School jazz ensembles will begin performing at 11:30 a.m. at the Green Center. All performances, master classes and clinics are open to the public. General admission to the 6 p.m. closing concert with Henderson and the DePauw Jazz Ensemble is $5; tickets for seniors, youth and all students are free.
Photo by Victor Hugo Guidini

The annual DePauw Jazz Festival moves from spring to fall this year culminating in a concert headlined by guest trumpeter Eddie Henderson at 6 p.m. Saturday, Nov. 18.

Following a full day of performance clinics with the Bloomington North, Clinton, Jefferson and the Decatur Central High School bands, the jazz great will take the stage for a closing concert with the DePauw Jazz Ensemble in a tribute to Miles Davis. The performance, led by interim director of jazz Jen Siukola, will be given in Kresge Auditorium of DePauw University’s Green Center for the Performing Arts.

Throughout the day, the high school ensembles will all have opportunities to perform and be critiqued by Henderson, whose musical story and life journey is truly unique.

Having grown up in the shadow of the Harlem Renaissance, he was surrounded by creativity. His father sang with the Charioteers, and his mother danced as one of the Brown Twins at the Cotton Club. He received his first trumpet lessons from Louis Armstrong at age nine and praise from Miles Davis at 16, who encouraged him to seek his own original artistic voice.

Following study at the San Francisco Conservatory of Music and three years in the Air Force, he later graduated with a degree in medicine from Howard University and began working part-time at a small clinic. But his place in jazz history awaited him, and performances followed with everyone from Herbie Hancock to Art Blakey.

“I just wanted to play music,” he recalls, “but I never in my wildest dreams thought I’d ever have a chance to play with the big guys.”

Dr. Henderson (a.k.a. “Funk Surgeon”) has been a faculty member of The Juilliard School since 2007 and of the Oberlin Conservatory jazz department since 2014. His music can be heard on Blue Note, Capitol, Capricorn, Columbia, Furthermore, Kind of Blue, Sirocco, Smoke Sessions and SteppleChase Records.

Henderson is also scheduled to give a program inspired by the Harlem Renaissance, “Twelve Moods of Jazz,” on the Communiversity@M2 series Friday, Nov. 17 at 7:30 p.m. however, at the time of press only 19 tickets remained for this “dinner and a concert” program at Music on the Square, which will include pianist Steve Snyder, bassist Nick Tucker and percussionist Kenny Phelps. For up-to-the-moment availability, visit music.depauw.edu/events.

General admission for Henderson’s guest performance on Saturday with the DePauw Jazz Ensemble is $5. Tickets for seniors, youth and all students are free. Tickets may be obtained online (music.depauw.edu/events) or at the Green Center box office beginning 90 minutes prior to the closing concert.

All of the following events are in the Green Center for Performing Arts, 605 S. College Ave.: