TERRE HAUTE —Noting that “justice is required in this case” a new judge is sending a former Putnam County deputy back to federal prison.

Terry Joe “T.J.” Smith of Greencastle will spend an additional 19 months in prison based on the Monday-morning decision of Chief Justice Jane Magnus-Stinson. 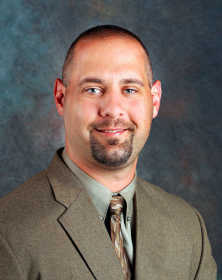 “I’m imposing a sentence that will return you to prison because I believe that is just,” Magnus-Stinson said before announcing her decision.

Citing the sentencing range of 33-41 months, Magnus-Stinson handed down a sentence on the low end of that range — 33 months.

This leaves the former deputy and Greencastle city councilman another 19 months to serve on top of the 14-month sentence he has already served.

The case has twice been before the 7th District Court of Appeals, with this being Smith’s third appearance before a judge in Indiana’s Southern District for sentencing.

Original Judge William T. Lawrence was removed from the case after he refused to alter his 14-month sentence during Smith’s second sentencing hearing in April 2016.

In returning the case to the district level, the appeals court invoked Circuit Rule 36, which calls for a new judge.

The court proceedings on Monday were marked by an emotional apology from Smith, his attorney requesting no additional prison time and the prosecution arguing for what it has advocated all along — a 60-month sentence.

Overwhelmed at times during his statement, Smith spoke of how he has let those around him down, including wife Ashley Smith, who remains a jail officer for the Putnam County Sheriff’s Department.

“I am reminded every day that my wife pulls into the driveway in a sheriff’s car,” Smith said. “My pride turns to shame. As she talks about people she works with I’m reminded of the very people I shamed.

“In the past two years, I’ve seen my wife moved — even to the point of sickness — over the things for which I am to blame.”

After also mentioning his son and grandparents, Smith moved on to apologize to his victims — for the first time in court.

This is significant in that both the prosecution and the Court of Appeals had previously cited a lack of contrition toward the victims.

Smith noted his desire to apologize to Cletis Warren before sorrowfully noting he will have no such chance with second victim Jeffrey Land, who passed away in August at age 39.

Smith’s attorney, Federal Community Defender Gwendolyn Beitz, noted Smith’s contrition, his employment since his December 2015 release, his good record in prison and on probation and his completion of anger management course as reasons not to return him to prison.

Noting that the court often needs “a crystal ball” in determining a course of action, Beitz said the court had a rare opportunity in this case of seeing the rehabilitation that had already taken place as a result of a sentence.

“We want to see people change their mind and change their action,” Beitz said. “You’ve seen both in this case. You don’t need a crystal ball.”

Beitz argued for no additional time, requesting that if more was imposed it be on some form of house arrest so as not to further disrupt Smith’s professional and personal life.

Deputy U.S. Prosecutor Bradley Blackington, who has been with this case from the beginning, focused not on Smith’s actions since release, but leaned heavily on the latest decision from the Court of Appeals when it remanded the case in June.

He noted that the higher court wanted more than clarification, a line of thinking espoused both by the defense as well as Judge Lawrence.

“They sent it back for resentencing,” Blackington said.

The prosecutor argued that more jail time would mean justice.

“The defense asked, ‘What are we getting by sending him back?’” Blackington said. “We’re getting justice.”

As in the past, Blackington noted federal guidelines for sentences such as Smith’s and how the 14-month sentence was less than half of the minimum advisory.

Blackington returned multiple times to the issue of deterrence for others who would commit similar crimes, noting “a pattern nationwide” of police excessive force cases.

“A sentence of less than half of the guidelines does not serve as a deterrence,” Blackington said. “It’s a slap on the wrist.”

The prosecutor also noted Smith’s remorse in his statement to the court, but was unswayed by it.

Leading up to announcing her decision, the judge made it pretty clear that lenience was unlikely, noting that Judge Lawrence had been removed from the case for a reason.

“I think the court invoked Rule 36 for a reason,” Magnus-Stinson said. “I think it was for a fresh look at the case.”

One new point the judge’s “fresh look” brought to the case was that anger, while perhaps a part of Smith’s problem, may not have even played a part in one of the offenses.

“What strikes me in Mr. Warren’s case is there didn’t seem to be any anger at all,” Magnus-Stinson said. “I strikes me as meanness — just a mean-spirited punch in the face.

“In Mr. Land’s case, I guess he made the mistake of running his mouth.”

She went on to cite Smith’s bragging about the instances as further aggravating circumstances, noting that many of his actions could well have merited the 60-month sentence the prosecution requested all along.

She also noted, though, that Smith has been a good citizen since his release.

“I do believe there’s a balancing that tips in your favor,” Magnus-Stinson said.

The judge also noted that she was not considering a wider trend of police brutality, but “just this case.”

Taking all of the factors into account, Magnus-Stinson imposed the 33-month sentence as something she considered “fair, but not greater than necessary.”

Smith was not taken into federal custody following the proceedings, with the judge noting his clean record since his release and allowing him to self-surrender.

He is also eligible to appeal within the next 14 days.

In addition to the prison sentence, Magnus-Stinson also re-imposed two years of supervised release and the fines from the original case, but noted that those penalties have already been served.

Smith was first charged in March 2014 with four counts of deprivation of civil rights under color of law for incidents of alleged police brutality.

In September of that year, a jury found Smith guilty on two of four counts.