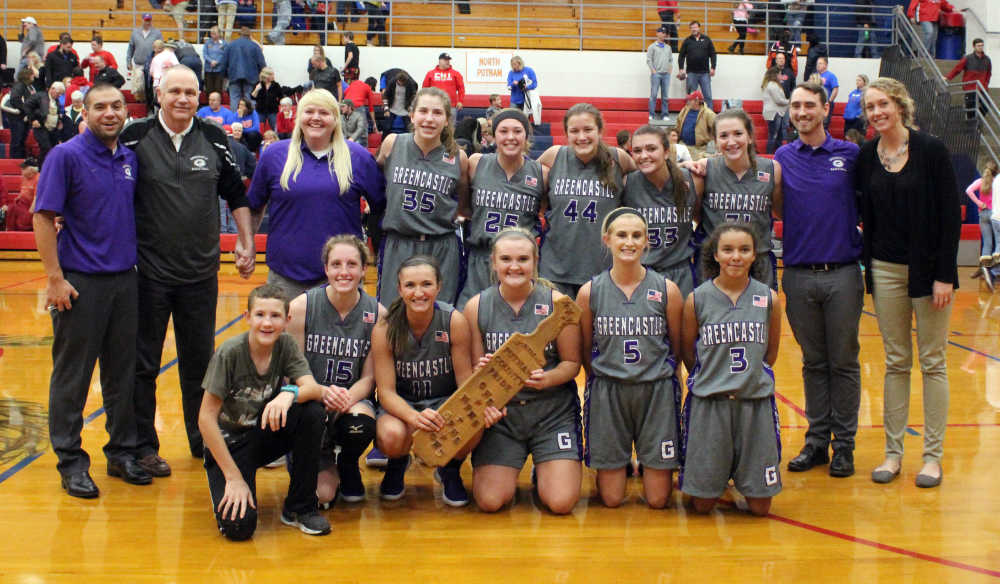 The tightly-contested game never had more than a five-point difference in the score, as the Eagles got five first-quarter points from senior Miranda Bieghler in taking a 10-8 lead at the first stop.

Rose White had six points for Greencastle in the period, and the Tiger Cubs opened the second quarter on a 7-0 run with five points from Jalyn Duff and two from Bailey Shuee to take a 15-10 lead.

The Tiger Cubs would hold that lead throughout the rest of the half and for the entire third quarter, leading 16-12 at the intermission and 21-18 going into the fourth quarter.

Bieghler hit a trey just 43 seconds into the fourth quarter to tie the score, and the teams traded points for several minutes.

Caitlin Capps tied the game again at 27-27 with 3:47 to play on a putback of a Lillie Stein miss, but Stevens got an offensive rebound and scored 52 seconds later to put Greencastle up 29-27.

Bieghler responded with a trey to put South Putnam back ahead 30-29 with 2:40 left. 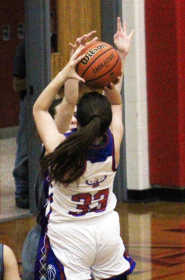 White hit a pair of free throws to give Greencastle the lead as more seesawing took place, and the Eagles found Capps in the middle of the Greencastle zone for a short jumper with 43 seconds to play.

Stevens then missed a short shot, got the rebound and scored on the winning putback.

South Putnam got the ball on the alternating possession, but Bieghler missed a long trey at the buzzer and the Cubs emerged victorious again.

“That was a fun game,” said Greencastle coach Bradley Key, whose team won its third straight game after starting the season 0-3. “Our team needed something like that. We practice hard every day, and we haven’t seen a lot of results from it.

“You have to give a lot of credit to my three seniors,” he continued. “I thought Rose played great, and we got good minutes from Marin [Nally] and Layna [Robinson] too. That’s a good team win.”

Key knew his team had beaten a quality opponent in the undefeated Eagles, who had won their first three games of the year.

“They are an excellent team,” Key said. “Defending them was almost impossible.. I wasn’t really sure how we were going to defend them at the end.”

White played all 32 minutes, and finished the game with 10 points and seven rebounds.

She was tired afterward, but was happy to be able to complete her career unbeaten in county tournament play.

“This one was super hard, because it was such a close game and it meant such a lot,” she said. “I’m really proud of this one. We had to work really hard to get this one, and the seniors all wanted to go out with another one.

White hopes this victory can help the team continue its success throughout the rest of the season.

“This will really just start our season in a good direction,” she said.

South Putnam coach Brian Gardner saw his team shoot well in its semifinal win over Cloverdale on Friday, but not hit the basket nearly as well in the finals.

“The big thing for us is that when our shots weren’t falling early, we started to settle instead of attack the rim,” he said. ‘If I could get a dollar for every time I said to attack the gaps and get the ball to the middle, I would be a rich man. We just didn’t do that tonight.”

South Putnam had the top two individual scorers in the game in Capps (16) and Bieghler (11), but the remainder of the Eagles provided just five points (all from Stein).

“We gave up 33 points,” Gardner said. “You have to be able to score more than that. When we only have three players to score, and we only shoot four free throws while they hit 13 of 16, it puts you in a position where it’s tough to be successful.

”As well as we shot the ball on Friday night, we shot it just as poorly in this game.”

Gardner had talked to his team about not giving up second-chance points, but that specific part of the game is what eventually sent his team to its first defeat.

“We didn’t box out at the right time at key points,” he said. “We made a little run, then they got a couple of putback baskets that really hurt us. You have to give Greencastle credit. They did a lot of things that hurt us.”

Gardner still likes his team despite its defeat.

“The county championship, or any other championship, you have to play South Putnam basketball,” he said. “We didn’t play the way we want to play. If a couple of buckets go in, it changes the complexion of the game. We’re going to learn from it and move on.

“This group of girls is a great group,” Gardner said. “I wouldn’t trade them for anybody. The good thing is that we got another chance to go back at it [Monday night at Southmont].”