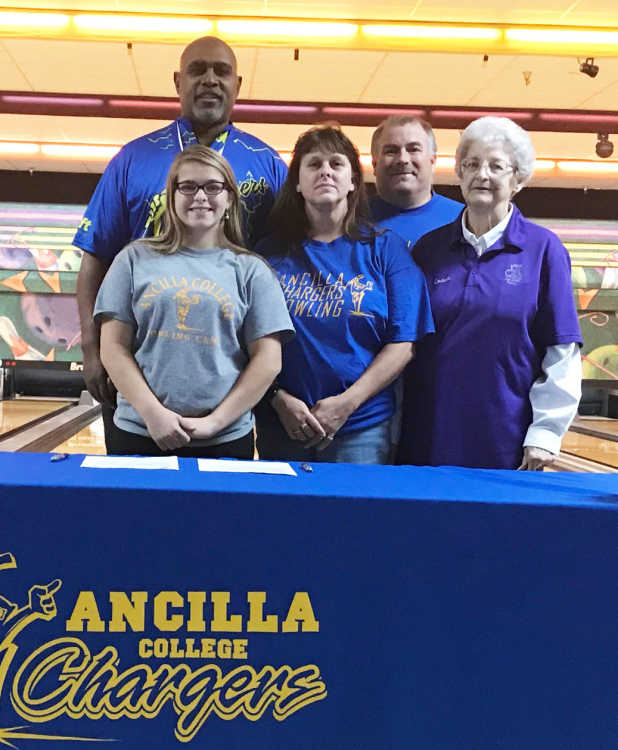 Greencastle senior Megan Friars (front row, left) signed a letter-of-intent last week to compete in bowling for Ancillla College. She was joined for the signing by her mother, Tiffany Friars, and high school coach Lucille Liebert. Ancilla coach Al Franklin and father Michael Friars (back, from left) also were present for the signing.
Gary Hazlett photo

CRAWFORDSVILLE — Last week, Megan Friars did something to secure her future.

The Greencastle High School senior signed her letter-of-intent to compete in collegiate bowling at Ancilla College in Plymouth, Ind.

She is certainly excited at the prospect.

“It’s really amazing. I am so excited, it’s a great feeling,” Friars said.

Friars has been bowling since she was a four-year-old. She is a smooth left-hander who has been solid for coach Lucille Liebert.

“She’s bowled for four years on the high school team. She is captain of the team and the anchor of our group,” high school coach Liebert said.

Megan is not only a bowler, but has played soccer at Greencastle all four years of her high school career. She plans on majoring in Agriculture/Animal Science at Ancilla.

“I watched Megan bowl at our camp. She’s got a great upside. She brings not only a good bowler to our team, but is a good academic fit,” Ancilla coach Al Franklin said.

Megan and her friend Breanna Gibbons, from Frankfort High School, signed their letters together.

Both will compete for the Chargers next year at the two-year college.

When asked about why she chose Ancilla, the senior replied, “The small size (school size) really fit with me. I think that their environment is the best.,” Friars said.

Megan is the daughter of Michael and Tiffany Friars.