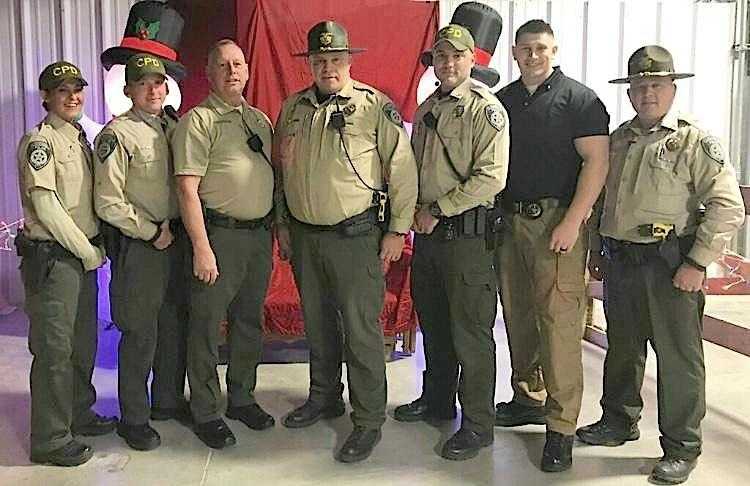 CLOVERDALE -- The Cloverdale Police Department has seen a whirlwind of change since former town marshal Charlie Hallam resigned in October 2016 and and current Safety Board Adviser Phil Parker was hired to “stabilize” the department last December.

“The reason I’m here, folks,” Parker said at the time, “Sheriff Stockton and I were approached about utilizing our experience here ... and assisting with kind of building a police agency from the ground up in terms of policy, standard operating procedure, to come to a place where we’re consistent in what we’re doing, that we are engaged with the community on how services are rendered.”

“It was either between hiring another consultant, which we done that before -- we just wanted to think outside the box and get their professional opinion,” Clerk-Treasurer Galloway said at the time. “We’re working with a win situation this time. We hit the jackpot.”

The town contracted Parker’s services for two years at a salary of $31,500 per year, which Clerk-Treasurer Cheryl Galloway indicated as “the bottom bracket of a patrolman,” but Adviser Parker also said, “I plan on spending not one more second on your town’s payroll than what it takes to accomplish this mission. So if that is done in six months, then I will be gone in six months.”

In January of this year, Steve Hibler, formerly a jail commander at the Putnam County Sheriff’s Department, was hired as the new town marshal.

“I am looking forward to the opportunity,” Hibler said at the time. “I’m glad to get started. I’m going to kind of look and try to learn my way around and what’s going on and where we’re at right now.”

Adviser Parker also commented,”It’ll be a rowboat to start, but it’ll be a speedboat in about a month. We’re going to hit the ground running.”

At the Cloverdale Town Council’s regular February meeting, Town Marshal Hibler announced that he had found 66 unserved warrants, 27 of which had expired by then, and had begun serving these and already made 10 arrests. He had also scheduled the three-person department to cover 77 percent of the town at all times and made sure that every first call would reach a CPD officer.

“This is the cornerstone of the agency,” Adviser Parker said. “This is what we subscribe to as the Cloverdale Police Department. ‘The Cloverdale Police Department will show and provide the most professional, effective and courteous police service possible at all times. The protection of life and property will be our primary focus. We will uphold and defend the federal and Indiana state constitution. We will address crimes and offenders with diligent, conscientious and proactive initiatives. We shall regard our office as a public trust, and in the discharge of our duties will be constantly mindful of our primary obligation to efficiently and effectively serve the citizens of Cloverdale and those who visit our town.’”

A copy of the complete mission statement and policies established so far is available at the Cloverdale Town Hall.

During that same meeting, Clerk-Treasurer Galloway added that an elderly resident had come to the town hall to make a donation to the police department after seeing Marshal Hibler’s response to an accident earlier that day.

“She had an envelope and she had $40 in that,” Clerk-Treasurer Galloway said at the time, “and it was in change. So you know that she didn’t have any money at all. But she really appreciated what they did and she brought in cash to be put into the police donations (fund).”

Controversy again struck the CPD after it was discovered that there were financial, training, documentation and liability issues with K-9 Officer “Chewy,” who had acted aggressively toward handler Hallam and a school official. He was suspended indefinitely in May, and later purchased from the town by Hallam when he left the CPD to take a position with the Spencer Police Department.

While former officer Luke Brown also eventually left the department, the CPD has hired Rick Lambert as evidence manager and crime scene investigator as well as full-time Officer Levi App. The CPD also currently has five reserve officers, including Reserve Sgt. Billy Wallace, who so far has donated 240 hours to the town.

The majority of case reports was burglary at 55 cases, followed by 41 breach of peace and 40 DUI/DWS/HTV. There were 34 drug abuse violations, 12 each of aggravated assault and juvenile delinquency, three liquor law violations, two motor vehicle thefts and one each of robbery, forcible sex offense and weapon law violations.

Town Marshal Hibler says his goals for the coming year are to hire two or three more reserve officers, another full-time officer by the end of January and establish a citizen’s academy to teach Cloverdale residents how police enforcement works and how they can help.