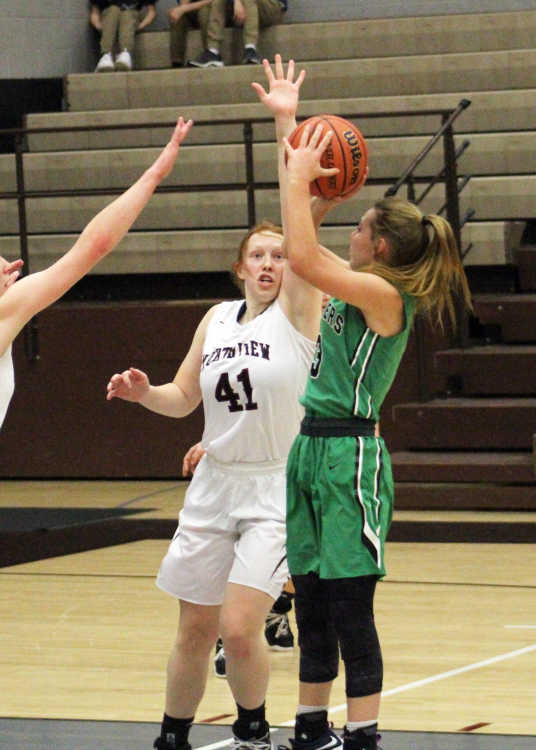 “Coach Dorsett did a great job getting the girls to raise their level of intensity in the second half,” said the mild-mannered Langdon.

Northview led 15-13 after one period, repeatedly getting the ball inside to sister post players Olivia and Jenny Lundy with great success.

Jenny Lundy scored all of her team’s nine second-quarter points, while the Clovers could manage just a hoop from Tori Combs with 2:23 left in the half.

Combs had picked up her second foul early in the period, but managed to stay on the court in spite of the difficult job in defending the Lundys.

Northview led 24-15 at the half, and the Clovers were only able to shave off one point in the third period — trailing 29-21 at the final stop.

Then, the Clovers heeded Dorsett’s advice the most and began chipping away at the lead.

The Knights actually got the first basket of the final period before a 6-0 run, with a Lakkain Price free throw, two Sammie Shrum free throws and an Abby Walker trey to cut the gap to 31-27.

Jenny Lundy answered with a basket to give her team a six-point lead before Shrum really got to work.

After struggling to hit 1 of 15 shots on Friday night and missing all seven shots in the first three periods, Shrum scored four of her team’s next five baskets to bring the Clovers within striking distance.

“We have told Sammie to just keep shooting good shots, and to not let confidence get down if it’s not going in,” Langdon said. “She had a great fourth quarter.”

Shrum’s final basket of the final period came with one minute to play, bringing the Clovers within 38-36.

Hailey Thomas hit a basket with 26.9 seconds left to tie the game, and the Knights would then try for the last shot.

After the Clovers forced the Knights to inbounds the ball after knocking it out of bounds, Combs made a miraculous defensive play and stole the ball with 6.6 seconds left.

Langdon called timeout, and assistant coach Greg Thomas then drew up the final play with the ball being thrown in from under the Clover basket.

Combs was placed at free throw line, and a teammate came up from each block to screen for her. Combs made a sharp cut around the right side of the gathering of bodies in the lane, and took a perfect pass for a layup to seal the victory.

“Coach Thomas gets the credit on the game-winner,” Langdon said. “He drew it up.”

For the Clovers, the game salvaged a 2-1 record in a difficult week that started on Tuesday with a narrow win over Clay City and continued with a blowout loss to Class 3A No. 5-ranked Owen Valley on Friday.

“We talked to the girls about how we are still growing as a team, and this week took us a lot of steps in the right direction,” he said, noting his team trailed by 11 points at 29-18 with 1:34 left in the third period. “We are finally getting all five of our players involved on the defensive end.”

Combs had 12 points and eight rebounds to lead the Clovers, while Walker finished with 11 points and Shrum had 10.

“Arianna McCracken gave us a great effort on defense, and every time we have a run there is a Walker three in it somewhere,” Langdon said. “We cut our turnovers down in the second half.”

Langdon was not surprised at the clutch defensive play made by Combs at the end.

“She’s just such a tremendous athlete, and to be able to put a girl on the ball to get tips and run down balls everywhere puts her head and shoulders above a lot of players,” he said. “She just wants the ball so badly.”