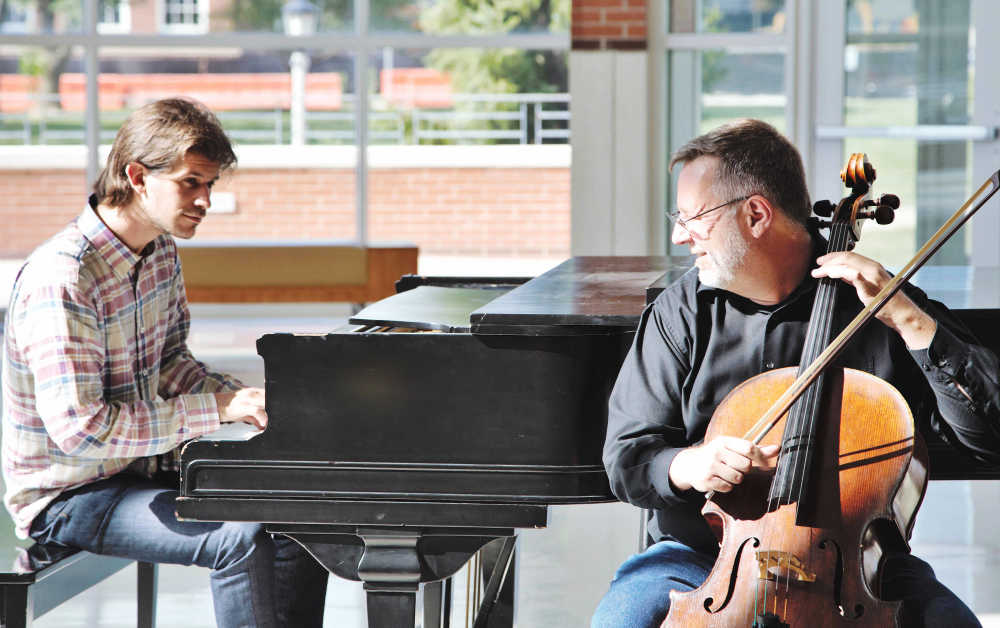 Eric Edberg (right) and John Kamfonas have slated a concert for Tuesday, Jan. 23 at 7:30 p.m. in the sanctuary of the festival’s home base, Gobin Memorial United Methodist Church in Greencastle, celebrating the release of their new CD “Restless Meditations,” which was recorded in Gobin​.
Courtesy photo/ JIAWEI FANG

Tuesday, Jan. 23 in the sanctuary of the festival’s home base, Gobin Memorial United Methodist Church, Greencastle Summer Music Festival founding artistic director and DePauw University music professor Eric Edberg will be joined by pianist John Kamfonas for a concert celebrating the release of their new CD.

The 7:30 p.m. performance also marks​ ​the launch of a tour in Arizona, Colorado and, later this spring, France.

Admission is free (donations accepted) and copies of the CD -- “Restless Meditations,” which was recorded in Gobin​ -- will be available for sale.

Edberg and Kamfonas are unusual among classical musicians for performing free improvisations in concert alongside composed masterworks. They​ ​met by chance in New York City in 2011, and after discovering their mutual fascination with improvisation and the spiritual aspects of music, began performing together.

Once they discovered the previously unrecorded sonata by Alan Hovhaness, who was deeply influenced by mysticism and non-Western musics, they became enchanted with the composer’s music, and began performing both the sonata and the composer’s short Suite and have now made the first recording of the sonata. For their new CD and an upcoming tour, Edberg and Kamfonas chose to balance the meditative energy of the Hovhaness works with the driving, youthful energy of Samuel Barber’s intensely romantic sonata. The Etonian mystic composer Arvo Pärt’s haunting “Fratres” rounds out their tour program.

“We absolutely wanted the first concert of this tour to be in Greencastle and in the church where we recorded the CD,” Edberg said. “We are so excited to share this music, and the CD, with our friends here.”

Classical and improvising cellist Edberg has been heralded by the Washington Post for an “excellent solo performance,” and for “playing both faultless and effortless, a pleasure to observe and enjoy” by the Appleton Post-Crescent. Meanwhile, The New York Times wrote, “Mr. Edberg vividly captured the stark, wailing character of the opening section and the moments of wry humor later on in the piece [Schnittke Sonata No. 2], which blends tonal and atonal elements.”

A concert organizer, workshop leader, and drum circle facilitator committed to enlivening and connecting people through music, Edberg is the founder and artistic director of the Greencastle Summer Music Festival, which has “brought the community together with friends making music for friends” since 2005.

He has performed internationally as a soloist and chamber musician with artists including the Grammy-winning pianist/composer Fernando Otero; the pianists Claude Cymerman, Taka Kigawa, and May Phang; cellist David Darling; and flutist Paul Horn.

Dedicated to music as a healing force and to bringing classical music “everywhere,” Edberg has played in nursing homes, schools, hospitals, prisons and even the New York City subways. Edberg attended high school at the North Carolina School of the Arts, and also studied at Juilliard, Peabody, SUNY Stony Brook and Florida State University.

Embracing his penchant for improvisation alongside his passion for the classical and contemporary repertoire, American pianist Kamfonas has given performances around the world, from New York to India, Paris to Beijing, which have been described as possessing “a grandeur that lifted the music into the sublime . . . and a delicacy that took one’s breath away.” (National Herald, New York)

As one of few improvising classical pianists, Kamfonas performs music ranging from Bach and Beethoven to Debussy and Barber interwoven among spontaneously conceived improvisations. He gave his New York debut at Merkin Hall in 2012 and has performed in numerous summer festivals, including the Atlantic Music Festival (Maine), Aspen Music Festival, Beijing International Music Festival and Academy and the Greencastle Summer Music Festival.

As a devoted proponent of contemporary music, Kamfonas has performed and worked with world renowned composers of today, including George Tsontakis, Eric Ewazen, Victor Kioulaphides and Alexandros Markeas among others. He also collaborated alongside various members of Yo-Yo Ma’s Silk Road Ensemble for a series of concerts at DePauw during the summer of 2017.

Kamfonas currently resides in Paris as a resident musician and Harriet Hale Woolley Scholar at the Fondation des Etats-Unis, site of a recent solo recital part of which was broadcast nationally on France’s TV channel TF1 in 2016. He holds degrees from Columbia University, Manhattan School of Music and the Ecole Normale de Musique in Paris.