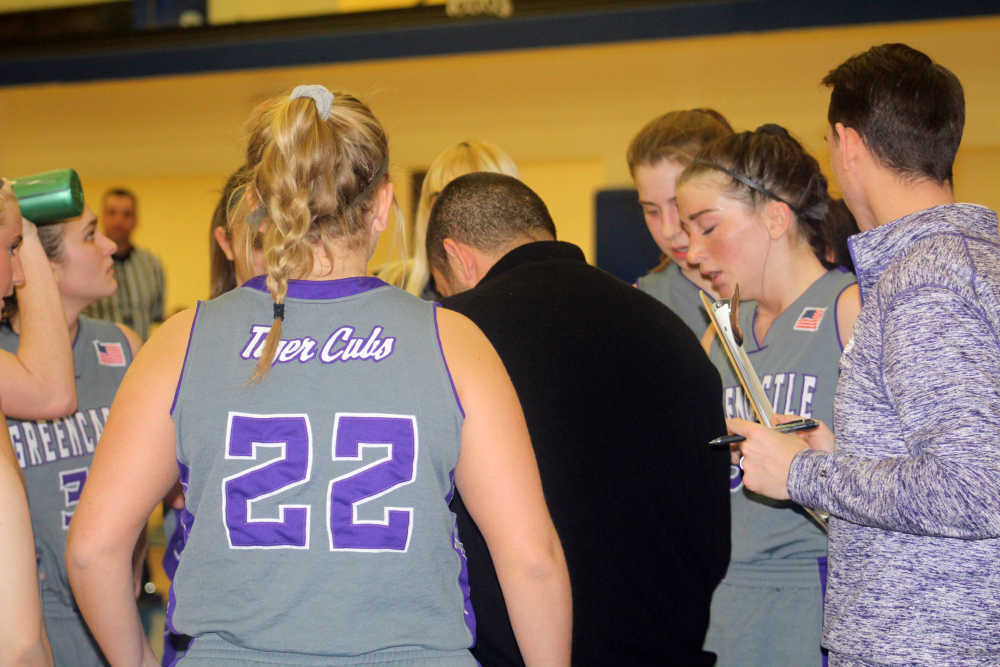 CRAWFORDSVILLE — Greencastle battled Benton Central tough for a quarter, but eventually the bigger and more athletic Bison broke away from the Tiger Cubs and recorded a 56-37 win in the Crawfordsville Sectional championship.

The Tiger Cubs finished their season 16-9 overall, winning the Putnam County title and finishing runnerup in the Western Indiana Conference.

Saturday’s obstacle was just too big to overcome.

“They did a really good job of putting pressure on us,” Greencastle coach Bradley Key said. “Our shots didn’t fall early, and that was my fear coming into this game — that the pressure would get to us. You have to give them credit — Benton Central is a really good team.

“You don’t become one of the top teams in the last 20 years by just showing up at the gym.”

Benton Central got on the board first with a 3-pointer from Cassidy Minniear, before the Tiger Cubs put together a pair of baskets from Jalyn Duff and one from Rose White to take their last lead at 6-5. Benton Central’s Kelsey Coffman then hit a trey to put the Bison ahead to stay.

Standout BC point guard Emma Fisher added a pair of baskets in the final three minutes of the period, and a putback by Greencastle’s Allison Stevens brought her team within 12-10 at the first stop.

The Bison scored the first six points of the second quarter to go up 18-10, and expanded that lead to 25-15 by halftime.

The gradual expansion of the lead started early in the third period, as Minniear hit a pair of treys to open the half and Coffman added another one for a 34-18 lead with 4:28 left in the quarter.

Benton Central led 39-22 at the final stop, and had edged that lead up to 44-24 before the Cubs mounted a brief comeback.

Bailey Shuee did most of the damage, hitting a trey and then adding four free throws. Duff had another pair of free throws in a 9-2 Tiger Cub run that cut the gap to 46-33, but the Cubs could get no closer. Benton Central hit 10 of 12 free throws in the final 2:01 to ice the victory and earn advancement to the Danville Regional on Saturday.

The Bison will meet WIC champion Owen Valley in the regional opener, while the hosts play Indianapolis Ritter in the other semifinal match.

“Bailey Shuee did a really good of attacking the basket and getting fouled,” Key said. “I wish we would have started doing that a lot sooner. I thought we did a decent job on them defensively, except they got away from us a couple of times.

“I thought our girls played hard,” he said. “I knew there was no way they were going to quit playing hard. It was our first time on a big stage like this.”

Shuee and White each had 10 points to lead the Cubs, while Stevens added eight and Duff had six.

For Key, it was the end of a season featuring one of his most fun groups to work with in his nine years at the helm of the Greencastle program. After starting the season 0-3 and allowing 169 points in those three games, Key admits he did not see this team achieving the many successes that it did.

“It was a good season,” he said. “They’re all special because every kid that comes through here means something to us. This was a group that I didn’t think was going to win a lot of games after the first three games. I thought we might scrap and win five or six games.

“They just started believing and playing as a team,” Key added. “This was one of the best true teams I’ve ever had. All of my first five or six players led us in scoring at some point this year, and that says a lot about our team.”

Key points to the development of White, his team’s leading scorer rebounder, as one example of the progress this group made.

“What an unbelievable story,” he said. “When she came here as a freshman, to be honest she wasn’t great at basketball. She just kept working hard and getting better.

“Marin Nally and Layna Robinson [the other two seniors] are just great kids to have in your program,” Key added. “They practice hard every day and don’t complain.”

“The progress I saw this year in Bailey and Seelye was amazing,” Key said. “Jalyn does a great job of running the show, and Allison just keeps getting better. The future is bright with four skilled players coming back, and we have a couple of JV players we are hope are able to help out next year.”