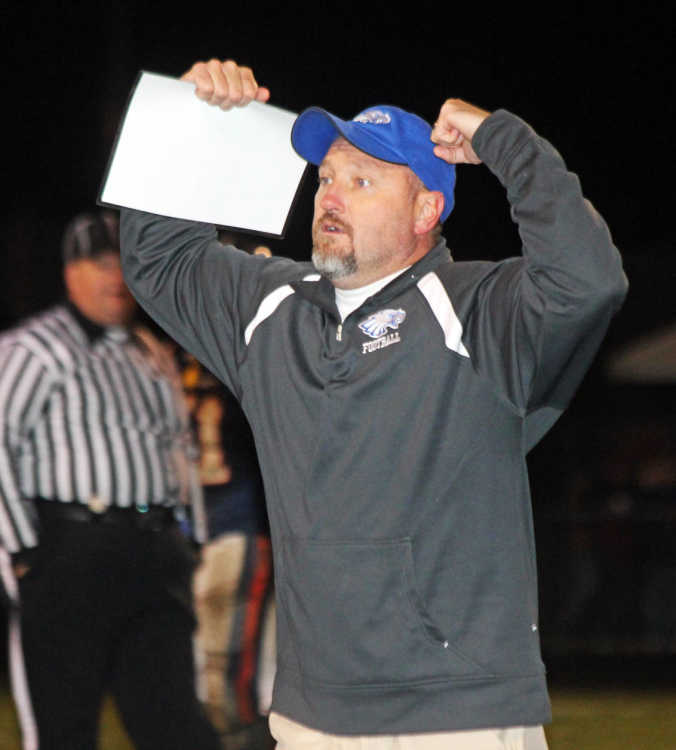 Troy Burgess left coaching four years ago at South Putnam to become an administrator, with one of his primary motives being able to watch his son play football at Plainfield.

Now that Mason Burgess has completed his career and will graduate this spring, his father has decided to rejoin the coaching business and was hired on Monday night as the new head football coach at Evansville Central.

Burgess will replace Andy Owen, who coached the Bears to an 11-2 record and sectional and conference championships last fall. Owen is moving up to become the full-time city-wide athletic director, and has high praise for his successor.

“Troy’s accomplishments as a coach and educator will make him a great asset to Central High School,” Owen said in a statement. “He brings a wealth of experience both on and off the field and I feel confident that Troy will bring incredible excitement, enthusiasm and work ethic when working with our student athletes and leading the Central football program.”

He previously was the head coach for four years at Greenfield-Central, with a record of 12-29 there, and had coached at Owen Valley prior to that time. He also served as boys’ varsity basketball coach at South Putnam for two years.

Burgess has been the athletic director, assistant principal and dean of students at South Putnam but will be returning to the classroom next fall in physical education and expects to be teaching weight training classes.

He will finish out the school year in his current position.

He’s excited about his new opportunity, and admits that he missed patrolling the sidelines during his brief departure.

“I wasn’t going to miss my son’s career, and that was the biggest reason I got out,” he said. “I was very fortunate that South Putnam gave me the opportunity to get into administration and allow me to still be able to go watch my son.

“I have no regrets there at all; I got to go see him play, and still be involved in athletics. I got the best of both worlds. I’ve missed coaching and I’m really excited to get back into it.”

“They have a lot of great football tradition there, and are recently coming off some very good seasons,” he said. “That makes it very exciting to know there’s a lot of talent there. There are a lot of good people there, with a good coaching staff in place and good administrators.”

Evansville Central will be the most urban school at which Burgess will have coached, and he sees no problems with a different student base.

“It’s definitely different than South Putnam or Owen Valley,” he said. “It’s probably more like Greenfield than any of the others. I don’t know that there will necessarily be better athletes, but the big difference will be in sheer numbers. At a school like South Putnam, you have a lot of kids playing both ways and some who never come off the field.

“That wears and tears on you,” Burgess continued. “Hopefully at a bigger school you don’t have as many kids playing both ways. It definitely creates more depth for you.”

Burgess does not think a lot has changed in terms of coaching football during his four-year absence, and expects to be able to jump back into the position easily.

“Football is football,” he said. “A lot of the basic philosophies that we did here when we were fortunate enough to win football games we can still use down there. Obviously, some of the Xs and Os may have changed a little but not too much. If you can go out and teach kids to be disciplined, be fundamentally sound and do things the right way you can be successful.

“Those are the things we are going to try to do there.”

Burgess looks back on his 12 years at South Putnam fondly.

“I have a lot of great memories and met a lot of great people here,” he said. “I was very fortunate to work with a good administration the entire time here, from when Mr. [Kieth] Puckett hired me 12 years ago through Mr. [Michael] Schimpf over the past four years. I’m going to miss a lot of these people.”

As normally happens with mid-year coaching hires, Burgess will be making trips to his new school as often as possible to get to know the returning players and work with them in off-season conditioning.

The completion of the I-69 interstate helps a little, he says, but it’s still a long trip.

“It’s still about 90 minutes to two hours any way you slice it,” he said. “I welcome the chance to go down there and get to know people. I’m ready to get going.”