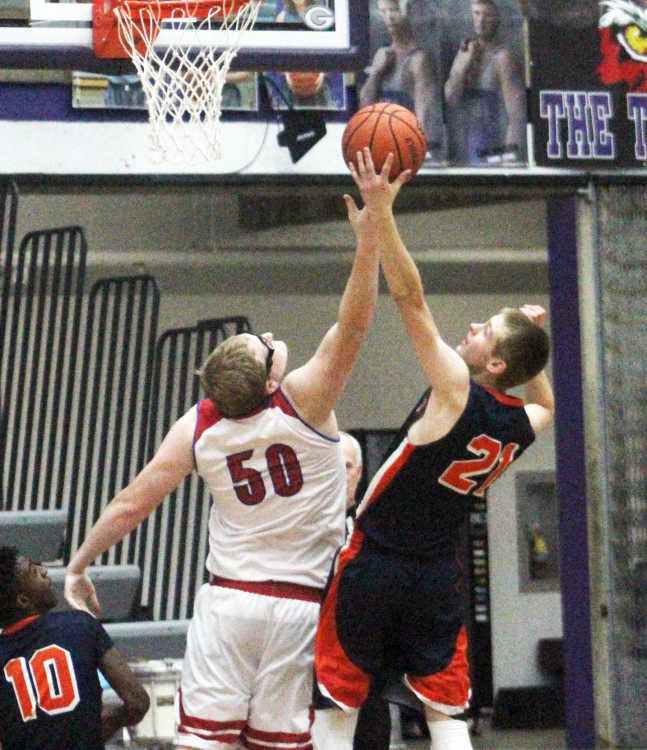 In a thrilling finish that set the crowd abuzz for the Putnam County Classic championship game, the South Putnam Eagles put together a furious comeback Friday in the consolation game.

Consolation games are not what teams strive for in a tournament. They are played early, for a crowd that isn’t usually very excited. It is just a preliminary game before the big one.

That setting belied the action that the final minutes of this game held.

“We would rather have been playing in the second game. North Putnam didn’t want to be in this game either, but I am proud how we fought back and just ground out a win,” South Putnam coach Greg Dean said. “We would dig ourselves a hole, then battle back. Our kids did a lot of really good things.”

The Eagles improved to 9-11 on the year while reversing their fortunes from the two teams’ Dec. 1 meeting at South Putnam. On that night, the Eagles led 29-12 at the half only to have the Cougars come back for a 47-41 conference victory.

Although they lost the turnover battle and shot the ball poorly on the night, the opportunistic and relentless Eagles took advantage of their pressure defense, pounded the boards and capitalized on a poor free throw shooting night by the Cougars.

South outrebounded the Cougars 48-31 to overcome a 37-percent (20-of-53) shooting night. North couldn’t put the Eagles away, only hitting 7-of-21 free throws for the game — including just 4-of-14 in the second half.

“It’s tough. We played really well for three quarters, then had a chance to win the game and couldn’t get it done,” North Putnam coach Collin McCartt said. “We played 64 minutes of really good basketball in this tournament [including Thursday’s loss to Cloverdale] and didn’t get a win. It was a combination of a lot of little things throughout the game.”

The two teams played a little sluggishly to open the game. Neither team was particularly effective, but the Eagles were able to end the first quarter with an 11-10 lead.

Thomas Fanning hit two of his four three-pointers in the quarter to lead the Eagles. South struggled to take care of the basketball.

The Eagles turned the ball over five times in the period, but North couldn’t take advantage. One reason was the boards. The Eagles were able to get multiple second shots as they took advantage of a 10-5 lead on the boards.

“We continue to struggle at times taking care of the basketball. We had too many turnovers early. We still did a nice job in a lot of areas, rebounding was big. We did a really nice job of controlling that area,” Dean said.

North exploded offensively in the second quarter. The Cougars began to hit some shots and were able to find openings in the Eagle defense right from the onset. They opened the quarter with a 13-4 run highlighted by a couple of 3-pointers by Chris Murray.

The Cougar defense really limited the Eagles shooting the ball to take a 29-17 halftime lead. South only hit 3-of-15 shots in the quarter, all three by Wes Lesko.

“We really were active on defense for most of the game,” McCartt said. “We have really improved defensively as the year has gone on. I didn’t think we were very good early in the year, but we have been playing it well here lately.”

Murray and Elliot Gross each had six points in the second period to spark the 19-6 second-quarter advantage.

“We got a lot of really good looks. We really couldn’t get anything to fall in the second quarter. That was tough to watch, but kept clawing back,” Dean said.

The intensity level picked up after halftime. The two teams really battled as they played the third quarter virtually even. The Cougars were able to maintain what seemed to be a comfortable lead at 45-34 at the end of the stanza.

South seemed to have no answer for the inside game of Gross and Andrew Pickel. They combined for 10 points in the quarter, while fouling out Eagle big man Lesko late in the quarter.

Lesko had one of his better games, the six-foot-six senior had 13 points and 11 rebounds before fouling out with over a quarter to play.

“Wes was really big tonight. There are some games where the matchups are good for Wes and some they are not. It didn’t really matter tonight, we had to have him with our injuries,” Dean said. The Eagles played the game missing two key contributors in Austin Arnold (sick) and Kain Gregory (ankle) and not wanting to play kids who are eligible for the junior varsity county tourney today.

The first part of the final period didn’t look like the game was going to end like it did. The Eagles couldn’t seem to make up any ground for the first few minutes of the final quarter. Murray made a free throw with 6:36 left to play and the Cougars led 52-36. From that point on, the Eagles outscored North 21-4 to pick up third place.

“We really turned up our defensive pressure in the fourth quarter. The kids were outstanding at getting in the passing lanes and disrupting their offense,” Dean said. 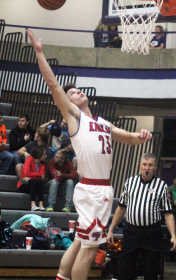 The Eagles on the other hand got an offensive explosion from leading scorer Plunkett. The six-foot-five junior only had three points on 1-of-9 shooting entering the final stanza.

Plunkett scored 17 of his game-high 20 points as the Eagles came from behind. Fanning brought the Eagles all the way back when he hit one from long-range to tie the score at 52-all with just 1:40 left to play.

North seemed to get the upper hand again, managing to hold a 56-55 lead with just :14 left. The free throw line hurt the Cougars again as two misses opened the door for South.

Plunkett was able to take a deflected pass on the right wing and twist and turn to rim to provide the winning shot with :03 left. The only Eagle lead of the last three quarters was at the final buzzer.

“I thought we did a good job on that last play defensively. We got a deflection, Allen made a really good play,” McCartt said as his Cougars fell to 7-13 on the season.

The Cougar team has the same problems with injuries as the Eagles. Senior Treyton Smith didn’t play with hand/wrist injury and Gross went down with :28 left in the game to an ankle injury.

“We will see how tough we are. We are going to have to go home, regroup and get ready to play next week. We’ve got some injuries and we will see,” McCartt said.

North was led in scoring by Gross with 16, while Pickel and Murray added 11 points each. Pickel also had 10 boards. Plunkett led all scorers with 20 points and 14 rebounds, while Fanning added 14 points and Lesko 13 points and 11 boards.

“Thomas was big tonight shooting the ball. Lane Watson really played well with us being shorthanded. We really only had six guys available and we fought through foul trouble. Allen was really aggressive late in the game,” Dean said.

Both teams hope to recover from their injury issues, with neither playing again until next Friday. The Eagles will host Owen Valley, while the Cougars will have North Montgomery come visit.