A 20-year-old Greencastle man appears to be at the center of two southern Indiana cases in which others have suffered serious consequences.

Levi Jacob Lewis is accused of selling drugs out of the Tau Kappa Epsilon house at Indiana University, a situation which has reportedly led to the closure of the frat house at Bloomington until 2021. 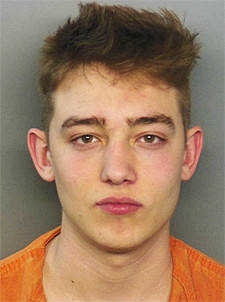 Lewis also was reportedly involved in an ill-fated Evansville drug case in which an apparent co-conspirator was shot to death Dec. 30.

IU spokesman Chuck Carney said Lewis, who had been a member of the Tau Kappa Epsilon, has not been an IU student since the start of the spring semester on Jan. 10.

"Indiana University immediately acted to investigate the alleged behavior upon learning of it and worked to support the IU Police Department in determining the facts of the case. These are serious allegations not in line with the values of IU and certainly not acceptable for the safety and well-being of our students. We support the actions of TKE International in closing the chapter given the nature of these charges."

Tau Kappa Epsilon closed its chapter at IU on Feb. 8 after a joint investigation between the university and national fraternity leadership.

It was following a tip from Evansville authorities that IU campus police searched a vehicle parked in the fraternity lot and reportedly discovered 14 one-pound bags of marijuana, more than $3,000 in cash, prescription pills and three vape canisters.

Investigators said they determined he was involved in large-scale narcotics sales some of which were allegedly conducted at the Tau Kappa Epsilon house.

Authorities said Lewis set up an ill-fated December drug deal in Evansville in which his passenger, 41-year-old Michael Pardee, was shot to death. Lewis was reportedly in the car with Pardee when the shooting took place and called 911.

Pardee had reportedly left his vehicle behind at the TKE house in Bloomington and in it, authorities found, among the other drugs, 26 Vyvanse pills prescribed to Lewis.

After obtaining a search warrant for Lewis' phone, authorities reportedly discovered evidence tying Lewis to what they termed "large-scale narcotics dealing," including some deals allegedly taking place at the TKE house.

According to the probable cause affidavit, Lewis replied to a text question asking about what he sold with "Shrooms and moonrocks ... other things from time to time. Acid often." He also said he sometimes sold "coke" or "molly."

Based on that information, IU police searched Lewis' room at the fraternity house and reportedly found marijuana, paraphernalia and a small amount of what appeared to be cocaine.

It is unknown currently whether or not Lewis will face any charges related to Pardee's death in Evansville.

Pardee's body was found in a car in a parking lot on Green River Road in Evansville.

Three Evansville men are charged in the Dec. 30 shooting death.