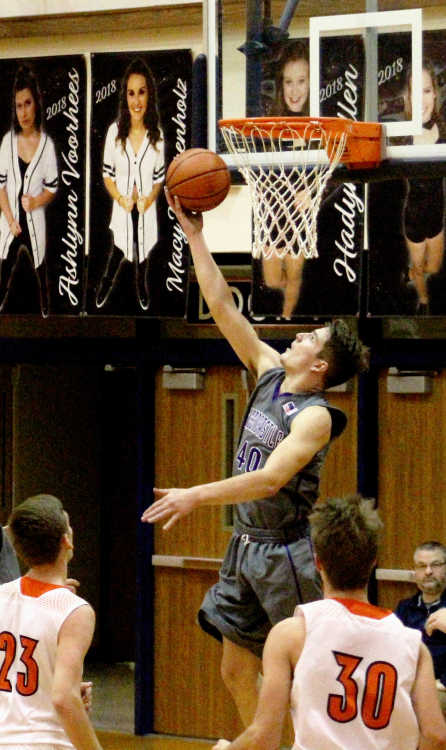 LINDEN – Coaches normally like to go into post-season play coming off one of their best outings of the year to provide momentum.

Greencastle may have overdone it on Friday night, shooting so incredibly well in an 84-49 rout of North Montgomery that the Tiger Cubs will be hard-pressed to surpass their shooting numbers when sectional play begins on Wednesday.

The Tiger Cubs were:

• Seven of eight from the free-throw line (87 percent).

“It’s been a work in progress,” Greencastle coach Bryce Rector said. “We had people who hadn’t played together much. You can see the strides that have been made, in terms of our ability to space people out and to flow. I’m really happy with that.”

This game wasn’t a case of the Cubs having a magical night, throwing up random shots at the basket and everything falling for them.

They were patient offensively, getting sharpshooting from perimeter players Colin York, Brody Whitaker and Benton Parmley. When the Chargers chose to go out and defend the longer shots, that trio was able to drive to the middle and either hit mid-range jumpers or feed unstoppable big man Gavin Bollman for easy layups.

After a slow start to the game in the first three minutes, the Cubs broke open a 4-4 tie with back-to-back treys from Parmley and Whitaker. Following a North Montgomery basket, the Cubs got a basket from Bollman on an assist from Whitaker and a York trey for a 15-6 lead.

North Montgomery got a trey from Justin Clary and a basket from 6-4 sophomore Jack Thompson to open the second period and cut the gap to 23-17, but Greencastle then took off on an 8-0 run that covered just 34 seconds which broke the game open for good.

Parmley and York hit treys, and Parmley penetrated to the basket before finding Trey Wood for a layup and a 31-17 lead. A Whitaker trey and a Bollman basket on a feed from Jack Hutcheson put the Cubs up 42-26 at intermission.

“I didn’t get a chance to look at the stats right after the game, but I know at halftime that we had 13 assists,” Rector said. “Normally you’re happy with having that many for the whole game; I’d estimate we finished with about 25 assists. For us to be able to do that means that we trust in our teammates and we’re getting people in good spots who are able to knock down the shots.”

The onslaught did not slow in the second half. An 8-0 run with points from four different players extended the lead to 52-29, as the Cubs hit 10 of 14 shots in the third period (including all three attempts from behind the arc).

Greencastle led 68-37 after three periods, and the shellshocked Chargers did not put up any resistance in the final period.

Rector’s team lost at Owen Valley on Saturday, and he now feels that game was beneficial in the stretch drive.

“We had a lot of trouble defending the dribble drive that game, and it was a little bit of a wakeup call for us,” Rector said. “You didn’t see that tonight. Colin drew a tough defensive assignment [Clary, who averages 20 points per game and finished with 14], and did a really nice job on him.

“Our other guys have to get credit too,” he added. “We had numerous times when our help defenders were able to stop the dribbler and then recover to get back to their man.”

Riding a two-game winning streak that includes a win over Western Indiana Conference champion Edgewood on Tuesday, the Cubs will meet Western Boone in Wednesday’s 6 p.m. game at the Lebanon Sectional – a team they beat earlier in the season.

“Overall it has brought us together and made us a tighter team that has to trust each other to win a basketball game,” he added. “We have done a good job of getting our kids to that as the season has progressed.”