York dominant with 36 as Cubs rout Crawfordsville, move into finals 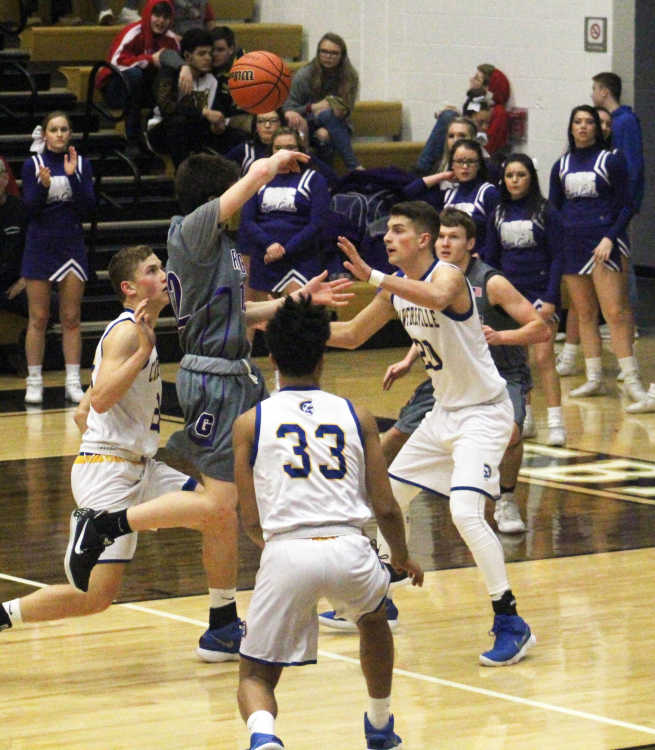 Greencastle’s scoring was not very balanced in Friday night’s 54-36 sectional semifinal win over Crawfordsville, as senior Colin York matched the entire team total of the Athenians and scored two-thirds of his team’s point.

Tiger Cub coach Bryce Rector understandably couldn’t have cared less, as York hit 11 of 17 from the field (including 4 of 6 from the 3-point line).

“You would be stupid to not get him as many shots as you can, when he’s shooting the ball like he is right now,” Rector said. “If he was taking bad shots, then I would complain — but every shot he took was a high-percentage shot.”

York worked the Athenian defense with surgeon-like precision, taking handoffs from the Greencastle weaving patterns and using high ball screens to pick his spots to take advantage of defensive weaknesses.

Defender not very far out of position? No worries. He gets rid of the ball and restarts the whole process, waiting for the right time to attack the basket or pull up for either a lethal mid-range jumper or a trey.

York hit three of four shots in the opening quarter as the Tiger Cubs took a 12-6 lead at the first stop.

The outmanned Crawfordsville team predictably started the game slowly, milking the clock for much longer than usual before taking a shot to reduce the number of possessions in the game.

The Athenians got four straight free throws from leading scorer Cam Harris in the first minute of the second quarter to cut the Cub lead to 12-10.

With the Cubs still leading only 15-12, York took off with four straight baskets from inside the arc to help his team claim a 28-15 halftime lead. His final points of the half came in the final two seconds, as he was unwisely fouled while shooting a 3-pointer and calmly swished all of the charity tosses.

York had 21 points in the first half, and hadn’t even had his best quarter yet. Fifteen more points in the third period, including three of four treys, that ended his scoring on the night.

He played the first 5:44 of the fourth period and shot only once, but the Cubs already had plenty of points.

Greencastle led 48-23 after a strong 20-point third period and coasted to its 17th win of the season.

Brody Whitaker and Gavin Bollman each added eight points for the Cubs.

Rector expected the Athenians to slow the pace, and his team was prepared.

“We talked about how important it was to get off to a good start,” he said. “If you find yourself behind against them, you could be in trouble. For us to execute that well was a great sign.”

Harris was held without a field goal in 12 attempts.

“He’s a really good player,” Rector said. “For Jack Hutcheson to do such a good job on him, and a couple of others who filled in when he was out, was very big for us.”

While Crawfordsville felt the need to slow the pace, Rector does not expect Lebanon to do the same. The Tigers, who were 8-15 in the regular season against a tough schedule but have now won five of their last six games, trailed Southmont by double digits in the fourth quarter on Friday night before winning in overtime.

“They are strong, quick and athletic,” Rector said. “We are going to have to be ready to handle their pressure, and I have full confidence in our guards to make the correct reads and plays.”

Rector acknowledged that Lebanon may have used some emotion from the death of a local law enforcement officer earlier in the day to its advantage on Friday against Southmont.

“It’s going to be a great environment, and our kids will be ready,” he said. “It should be a fun game,” he added. “They came out [on Friday] and played with passion, but once the game starts it’s a basketball game.

“This is what you work for — to get to Saturday night and play for a sectional championship.”

Rector will be coaching in his first sectional championship game as a head coach, and anticipated having a long (or short) night to get ready.

“We have their last seven or eight games on film, and I’ll probably watch them all,” he said. “You don’t need sleep during sectional week.”