No major injuries in Tuesday rollover

Responding to a strange sight on Shadowlawn Avenue Tuesday evening, personnel from the Greencastle Police Department and Greencastle Fire Department deal with the aftermath of a rollover crash.
Courtesy photo

A Greencastle woman and her daughter escaped without serious injury when she rolled her car on Shadowlawn Avenue Tuesday evening.

Danielle Painter, 29, told Greencastle Police officers she left McDonald’s just prior to the 6:13 p.m. crash and was westbound on Shadowlawn in a 2006 Volkswagen Jetta.

Painter’s daughter was seated in the front passenger seat. Painter told Capt. Charles Inman she reached over to help the girl with her Happy Meal, taking her eyes off the road. 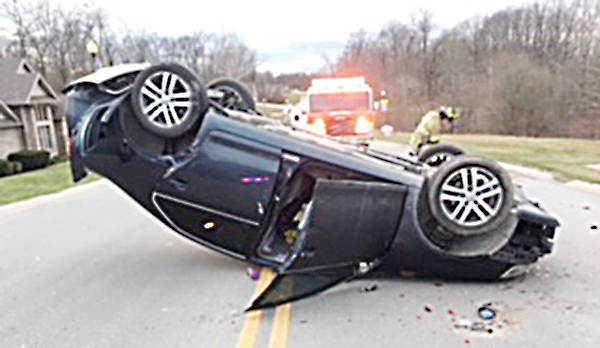 Danielle Painter of Greencastle and her daughter escaped the incident with only minor injuries.
Courtesy photo

In doing so, she drifted right, approaching a 2001 Nissan Xterra parked in front of 1041 Shadowlawn Ave. The SUV, registered to Michael Coan, was not occupied.

Painter said when she looked up, she could not avoid the collision, striking rear end of the SUV.

Witnesses told police the front end of the car briefly went airborne and it rolled onto its top a few feet down the road. The car came to rest in both lanes, facing north.

The impact damaged the left rear of the SUV and pushed it into the street. It rolled west down the incline of the street, coming to rest with its left rear tire flat.

Operation Life transported Painter and her daughter to Putnam County Hospital, but their injuries were not serious.

Inman said he visited with them at the hospital and they were simply banged up from the impact.

“It looked a lot worse than it was,” Inman said.

The officer also said speed may have been a factor, though no citation was issued. Painter estimated she was going 35 mph.

Greencastle Fire Department was also on the scene providing cleanup and medical assistance.