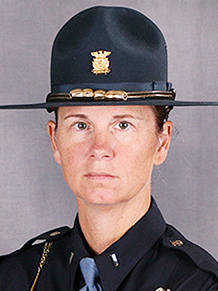 Elam began her law enforcement career in 1993 upon graduation from the 50th Indiana State Police Academy. She was assigned to the Toll Road District and patrolled Lake and Porter counties.

In serving as assistant division commander for the ISP Special Investigations Division, Capt. Elam will supervise 110 enforcement and civilian employees throughout the state.

Special Investigations Command personnel are assigned to an area and within specialized sections both in the field and at general headquarters.