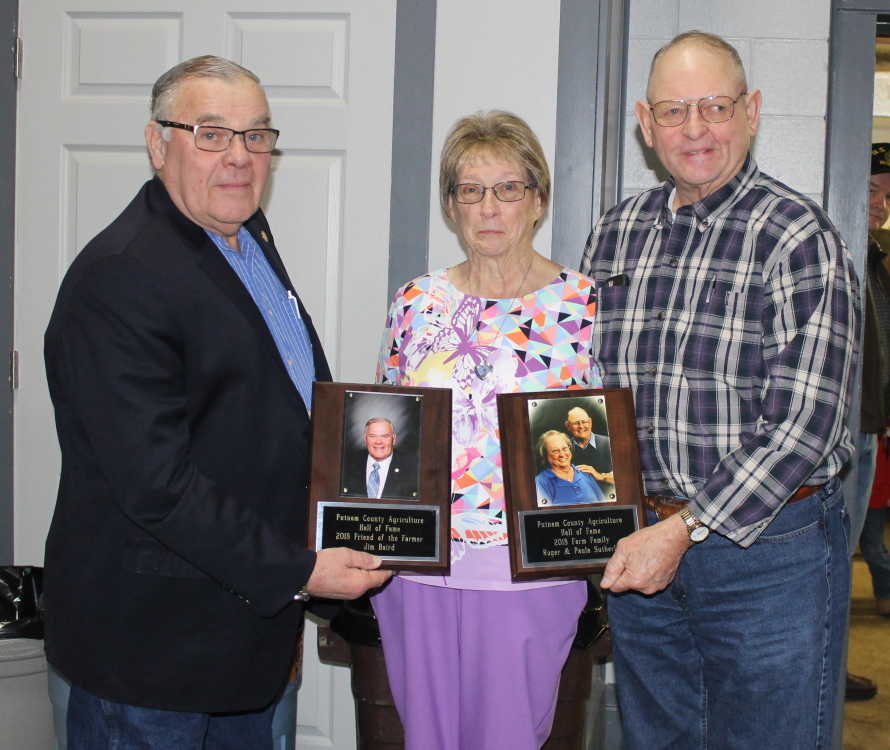 Jim Baird (left) was named the 2018 Friend of the Farm during Ag Day festivities Saturday morning. Meanwhile, Roger and Paula Sutherlin were named the 2018 Farm Family of the Year.
Order this photo

To the outsider, the farmer leads a quiet life of solitude.

We have a vision of a man (or woman) alone with his land, his crops, his animals, making his own way in the world.

The newest inductees to the Putnam County Ag Hall of Fame would tell you it's not quite like that.

In accepting the 2018 awards Saturday during Ag Day festivities, Farm Family of the Year Roger and Paula Sutherlin and Friend of the Farmer Jim Baird made sure to praise the people with whom they've been surrounded over their decades of service to Putnam County.

"Putnam County has many, many good families and it's through those associations we're able to do what we do," Roger Sutherlin said.

"I'm very humbled," Baird said. "The people in this room -- it's a pleasure to know them. Every one of them, in one way or another, has had an influence on my life."

In Baird's case, that life has included work for the Cooperative Extension Service as a livestock specialist in Putnam County early in his professional life, as well as remaining an active farmer and businessman in the community.

To introduce Baird, Ag Day Committee member Jenna Nees called him "a friendly face around Putnam County for most of his adult life."

That friendly nature has served him well more recently, as Baird served two terms as a Putnam County commissioner before serving the last eight years representing all of Putnam County and parts of surrounding counties as District 44 state representative.

In that time, Baird has championed a number of agricultural issues at the state level and he has hopes of carrying that work on to Washington as one of 13 candidates for U.S. Congress District 4.

In a crowd like Saturday's, though, Baird remains grounded in his Western Indiana roots, discussing the good people of the community for their hard work and common sense that he believes serve the larger world.

"We are very fortunate to live right where we do," Baird said. "Most people don't realize we can feed the world."

Among those feeding the world since the winter of 1968 is Roger Sutherlin. That was when the Putnam County boy returned home after 2-1/2 years of college to help finish a harvest that was still going in January and February.

He married Paula the following August and together they bought part of the farming operation and formed a partnership with his father.

Back then, it was two-cylinder John Deer tractors with no two-way radios.

Now Roger is used to "big, comfortable tractors where he does not hesitate to use a cell phone to call or text one of his sons to complain that the auto-steer does not work."

Fifty years after that winter of 1968, Cedar View Farms is still operating in rural Greencastle, have grown, diversified and even divide.

Roger and Paula's sons Ron, David and Dean, and even some of the next generation, plays a part in the operation.

"We couldn't have don't it without these boys, that's for sure," Paula said.

But the praise extends beyond the family.

"The community has been good to us," Roger said. "It's been a good life."

"It is a good life," Paula gently corrected.