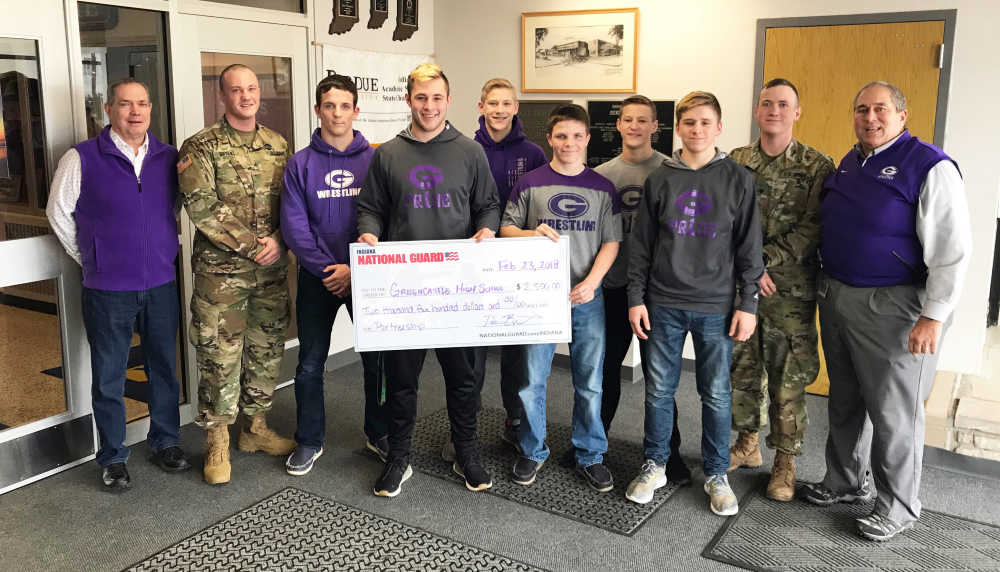 Money is not always easy to come by for high school athletic departments, especially for big-ticket items like wrestling mats.

Thanks to a generous donation from the Indiana National Guard and Sgt. Damon Bryant, Greencastle High School is well on its way to secure the final amount of funding necessary for replacing its 20-year-old mat.

Bryant noted the $2,500 contribution came from his budgeted federal money for community partnership projects such as this. 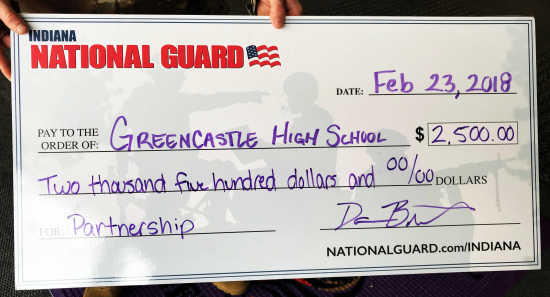 “Each recruiting team is allotted a certain amount of money per year,” he said. “We try to partner up with high schools. Sometimes we reach out to them, sometimes they reach out to us.

“We do partnerships like these to let us get our name out there a little bit better,” Bryant added. “That’s really what the National Guard is about. — making sure everyone has the right knowledge.”

Bryant said he personally has not successfully recruited a lot of Greencastle students, but previous recruiters have been able to attract Tiger Cub graduates.

“Putnam County and Greencastle have historically been a strong suit for recruiting,” Bryant said.

Greencastle principal Russ Hesler, a former wrestling coach at the school, noted that several athletes in that sport have gone on to be in the National Guard.

Among those were former Tiger Cub wrestlers Josh Myers and the late Charlie Pingleton, the high school state finalist and NAIA national champion who lost a battle with cancer last year.

“I’m sure they would tell you they were some of the best recruits they have had,” Hesler said. “It’s not for everybody, but it’s a good way to help pay for college if you need it.”

“They are already physically and mentally tough,” he said. “Those are qualities we are looking for.”

Hesler noted the National Guard recruiters have come to the school during lunch hours, sporting events and through the guidance department to try to recruit new members.

“It’s like a partnership, with all these new pathways [to careers] they want,” he said. “The military is another pathway that kids should explore. We appreciate their monetary help.”

Hesler noted that the new mat will have a section marked “Fallen Wrestlers,” in which Pingleton’s name will be listed along with any others in the future.

Hesler has also donated to the mat fund, along with members of the Bumgardner family and the Thomas family.

“We appreciate everyone’s help in this project,” Hesler said. “We were definitely in need of a new mat. It was due, and these gentlemen [from the National Guard] made it happen.”

Hesler said the current mat had been reconditioned once during its lifetime. The new mat the school liked best was approximately $14,000, but he was able to save on shipping costs and get some other discounts to lower the cost to $9,800.

Coach Shane Thomas, along with sons/wrestlers Trace and Cauy, will travel to Warren Central High School on the east side of Indianapolis to pick it up and bring it to its new Putnam County home.