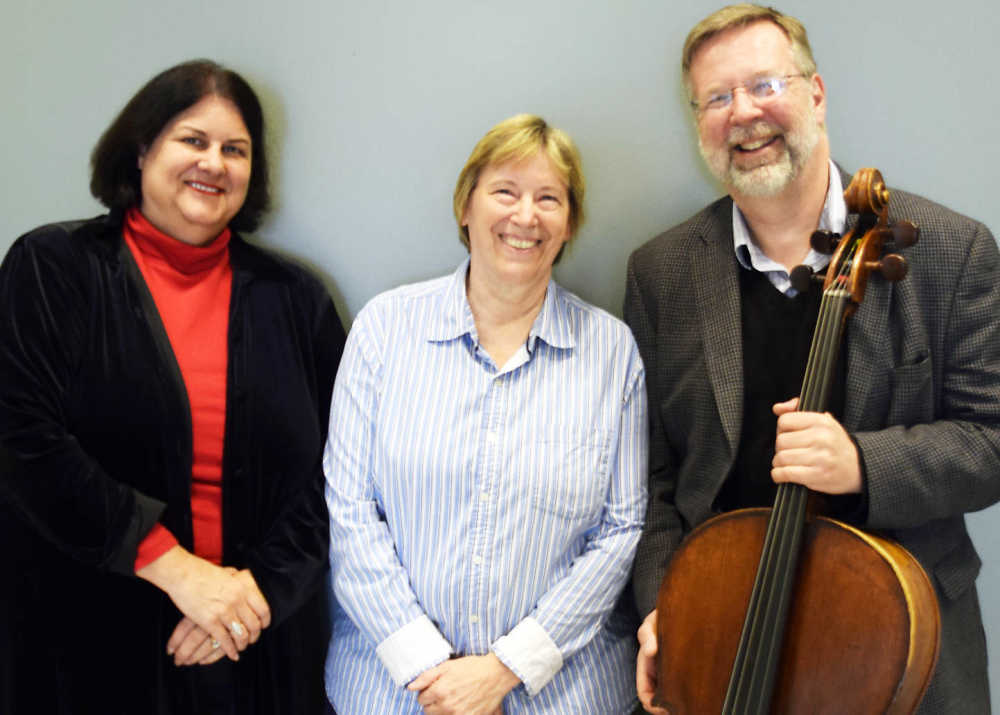 The tribute concert, which will be presented Wednesday, March 21 at 7:30 p.m. in the Green Center’s Kresge Auditorium, will open with Edberg performing “Svyati,” for choir and cello by Sir John Tavener.

It will be followed by the world premiere of “Songs for the People,” written specifically for the occasion in honor of Coburn and Edwards, by Roberto Sierra, the school’s guest composer-in-residence during its 2015 season.

Closing the evening will be a performance of the organ reduction of the great “Requiem in D Minor” by Gabriel Fauré featuring Edwards at the organ, Coburn as soprano soloist, and fellow music faculty member André Campelo as baritone soloist.

Sierra, who returned to campus for a special work session with the artists Feb. 17-18, formally inscribed his new work with the following dedication: “Commissioned by DePauw University for Carla G. Edwards, Professor of Organ and Pamela Coburn, James B. Stewart Distinguished Visiting Professor of Music, with sincere gratitude and appreciation for their years of dedication and tireless support of DePauw’s School of Music and its students.”

“In ‘Songs for the People,’ ” the composer notes, “I wanted to have the voice come out of the organ sounds, almost as if it is another timbre of the instrument. When the text finally emerges the voice becomes the main focus, and organ assumes the more traditional accompanying role. The text guides the form of the song, which aims at conveying the beautiful message from the words of African American poet Frances Ellen Watkins Harper (1825-1911).”

“With all the strife going on in the world, Roberto felt the Harper poem, which parallels the discord in the world, was really appropriate,” says Coburn, professor of voice at her alma mater since 2005. “The piece, which is through-composed, is very challenging rhythmically, but well worth the effort put into preparing it. For me, it has hauntingly beautiful moments.”

“In the end,” Edwards adds, “the composer’s resolution of dissonance suggests that it’s Roberto’s hope that music, the vehicle that brings us together, can also play a part in helping bring the world to a place of hope and peace.”

General admission to the special choral concert is $5. Tickets for seniors, youth and all students are free. Tickets may be obtained tickets at music.depauw.edu, or in person at the Green Center box office from noon to 4 p.m. Monday, Wednesday or Friday and 90 minutes prior to the performance.