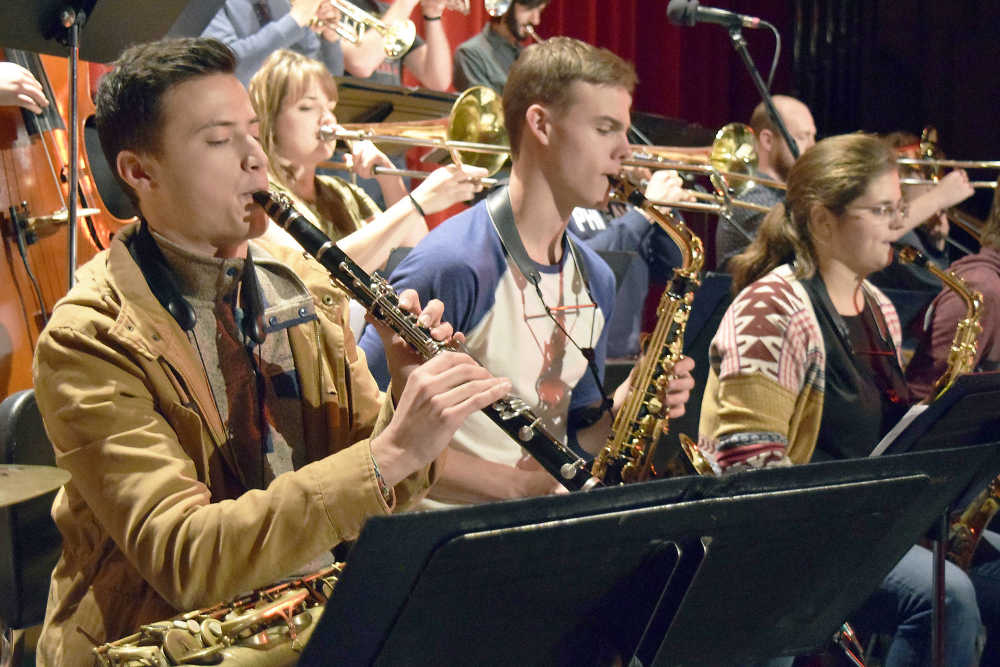 Among the performers taking up the doubles challenge are senior saxophonists Spencer Schillerstrom and Tyler Schaefers who will double as soloists on clarinet and flute during the DePauw Jazz Ensemble concert, Sunday, March 18. Admission to the 3 p.m. performance at the Green Center is $5. Tickets for seniors, youth and all students are free.
Photo by Suzanne Hassler

The DePauw Jazz Ensemble, directed by Steve Snyder, will present an eclectic span of big band music from a 1918 hit tune to a 1998 Grammy Award-winner in its first concert of the spring season on Sunday, March 18.

Along the way will be some Count Basie as well as some salsa jazz that should make everyone want to hit the dance floor. Catch the group’s performance at 3 p.m. in the Green Center’s Kresge Auditorium.

“There are a couple of unusual instrumentations on Sunday’s program that are allowing us to explore some unique colors within the ensemble,” commented Snyder, director of jazz studies at DePauw and a frequent performer on the Midwest jazz scene.

“The trombone section is doubling, for example, on euphonium and tuba; the trumpet section is doubling on flugelhorn, in addition to using bucket and Harmon mutes, and we have an expanded woodwind section that includes saxophones, flute, clarinet and bass clarinet.

“We’ve been working on developing these doubling skills for awhile,” Snyder continued. “I started introducing this instrumentation to them four years ago. These are some great students, who have devoted themselves to this challenge, and are now at a very high level with doubles, which is an important professional expectation.

“If you can double, it increases your opportunities for hiring. It makes a musician more valuable if they can move between sax, to flute, to clarinet and bass clarinet – or trumpet to flugelhorn, as is needed on Bill Evans’s ‘Waltz for Debby,’ a really challenging arrangement by Don Sebesky that we’ll be performing Sunday as a tribute to Evans.

“It’s very exciting to have a college band that can handle all of these doubles,” the director noted, “because it also allows us to explore a much wider palette of colors.”

Joining the group on the Kresge stage will be a former band member, jazz vocalist Elena Escudero. A frequent and local favorite at Jazz at the Duck while at DePauw, Escudero will travel up from the IU Bloomington Jacobs School of Music to solo on “Descarga” by Bobby Rodriguez and Paul Lopez.

General admission to the concert is $5. Tickets for seniors, youth and all students are free. Get tickets online at music.depauw.edu, or in person at the Green Center box office from noon to 4 p.m. Monday, Wednesday and Friday and 90 minutes prior to each ticketed performance.