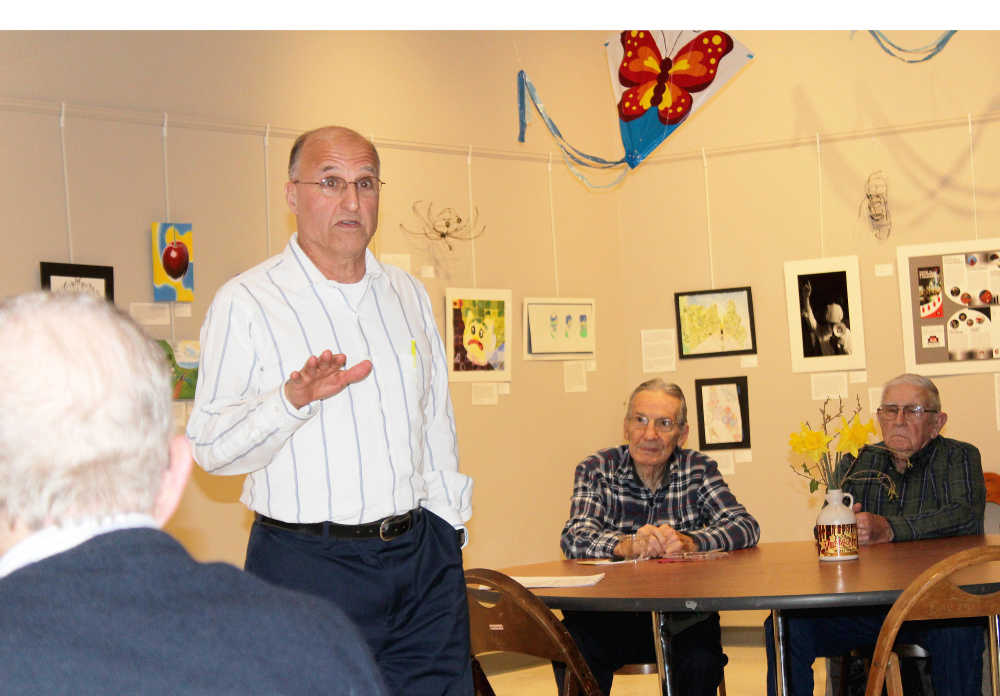 Completely restored at long last at the beginning of last fall, the Civil War Monument at Greencastle’s Forest Hill Cemetery will be feted this spring and summer.

The monument restoration project, which from conception to completion literally lasted longer than the Civil War itself, has been awarded a 2017 state preservation award, Heritage Preservation Society (HPS) President Phil Gick revealed Thursday night at the organization’s annual meeting at the Putnam County Museum.

The audience of more than 50 HPS members and guests burst into applause with word of the announcement.

The odyssey of the monumental restoration effort began with a 2011 HPS tour of Forest Hill Cemetery during which the deteriorating condition of the rare Civil War memorial was noted, setting the stage for serious discussion at the 2012 annual meeting and the march toward fundraising and restoration that followed.

History notes that the Putnam County Civil War Monument, just the third such statue erected in the state, was dedicated five years after the war ended. It was the first Civil War monument in Indiana to feature a human figure, and the only Hoosier memorial displaying a seated soldier.

Sculpted by Thomas David Jones -- who erected a like version in Pomeroy, Ohio -- the monument was titled “Western Soldier on Guard.” It was formally dedicated to great fanfare on July 2, 1870 before an estimated 8,000 people -- an astounding number considering that at the time, fewer than half that many people actually lived in Greencastle.

Thursday night, Gick announced that Sunday, July 1 is the tentative working date for rededication of the monument, indicating a Sunday program would be “more advantageous” than staging the rededication ceremony on a Monday, on which the original dedication date of July 2 falls this year.

Gick reminded the group that the restoration project was completed Sept. 29 by Blakley Corp., Indianapolis, although its completion came “not without any hiccups.”

The principal problem, he said, was “finding an engraver who could mimic” the carvings of the names of Putnam County Civil War veterans for the 26 of 40 stone blocks of names that were replaced.

The end result not only pleased Gick and HPS members but also officials from the Division of Historic Preservation and Archaeology, who made a site inspection of the historic monument.

“If you haven’t been out to Forest Hill to see it,” Gick said, “I encourage you to do so.”

Gick also reported that the nomination of the towns of Cloverdale, Roachdale, Bainbridge and Russellville as National Historic Districts continues to move through state channels in a process than can take 18-24 months before approval can send the request on to the federal level.

“Knock on wood, we hope to get that done this year,” Gick said, noting that the designation can make the towns eligible for grants for restoration purposes.

“Besides the honor,” he said, “that was part of the motivation.”

During the business portion of the meeting, HPS members elected Susan Huber, Carolyn Mann, Susan Price and Kristin Fuhs Wells as new directors. Lynda Dunbar and Linda Sullivan are going off the board.