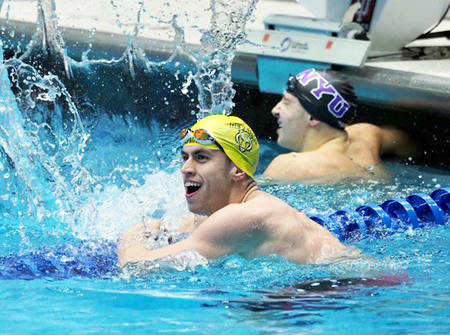 INDIANAPOLIS — DePauw senior Sam McManus became just the fifth student-athlete in DePauw history to earn an individual national championship when he won the 200-yard breaststroke on Saturday at the NCAA Division III Swimming and Diving Championships at the IU Natatorium.

McManus, who was second in Friday night’s 100 breast, earned his fourth individual all-America honor including two last year. In Saturday’s prelims, McManus was fourth after finishing in 2:00.53.

As he did in Friday night’s finals, McManus relied on a strong finish to win the title. After 100 yards, he was in sixth, but closed to third after a 30.33-second split. With 50 yards to go, he pulled ahead with a split of 30.22 and touched first in 1:58.57 which broke his own school record of 1:59.46 which was established at last year’s Championships.