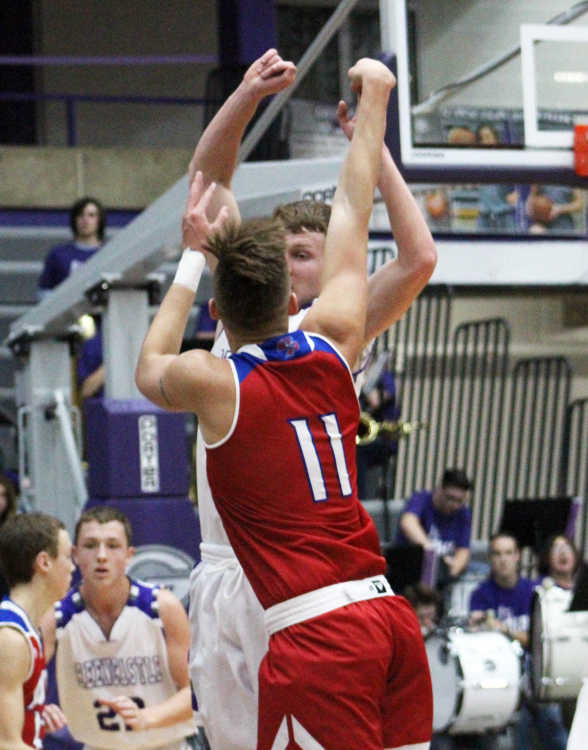 With the conclusion of the high school basketball season with Saturday’s state finals, the post-season honor squads and all-star game rosters have been announced — with several Putnam County players receiving mention.

Numerous other opponents of Putnam County teams are also mentioned on the various squads and are marked in bold face in the accompanying lists.

Here is a summary of each list or event for Putnam County players:

Cloverdale’s Jalen Moore was chosen to the first team of the Small School All-State team, while Greencastle’s Colin York was given honorable mention.

Moore and York were both invited to participate in the event, which will be Saturday in Beech Grove.

Both players are out of state on spring break and will not be able to participate.

Attendance is not required for the event to make the All-Star team.

Plunkett and Bollman both surely merited consideration for this group, which will play similar teams from Kentucky and the senior Indiana All-Star team.

The Central Group did not include other nearby standouts such as Monrovia’s Max Newman, but did include Connor Jones of Danville and Manual Brown of Indianapolis Scecina.

Moore and Cooper Neese have been Junior All-Stars the past two summers.

Moore will be a member of the North Team in the boys’ game at Martinsville on April 7.

He will be coached by Clover head coach Patrick Rady and Criss Beyers, head coach of the undefeated Class 4A state champion Warren Central team.

York will play in this game on April 6 at Robinson, Ill.

Rosters have not yet been released, but will be published when available.

No further word on the college homes for Moore or York.

Moore has received recent interest from the University of the Incarnate Word in San Antonio, Texas. The Cardinals are a Division I program that competes in the Southland Conference.

The school recently hired Indiana native and former Purdue player Carson Cunningham as its head coach, and as often happens such coaches immediately turn to their home state to find talent for their first teams at their new schools.

York is still deciding between a list of small schools including Franklin, Anderson and Wabash.

Other odds and ends

• Last week, we were able to make a big dent in overdue college signing stories during a rare break from daily activities. There are still several yet to be written, and several signings yet to take place.

• South Putnam junior Drew Bratcher has made a verbal commitment to play softball at DePauw.

She was a third-team all-state performer as a freshman.

Best wishes to her little sister, Alex, in her recovery from labrum surgery.

Bratcher is hopeful of recovering in time for next basketball season, in which she seeks to help the Eagles to a third straight sectional title.

• New Albany’s Romeo Langford has yet to make a decision, but appears to be staying on track with his stance all along that he would decide in late April.

He will be playing in the McDonald’s All-Star Game on Wednesday night in Philadelphia (7 p.m., ESPN).

Langford is the highest-ranked uncommitted player, and does not appear to have made changes in his list of final three schools that includes Indiana, Vanderbilt and Kansas.

Langford was as genuinely sincere as possible this year, staying after games for as long as two hours to sign autographs for any fan who wanted one.

It hardly seems like he is going to pull one of those idiotic shows with a row of hats that players pick up and put back down, until they reach the right one.

He has granted IU his last visit later this month before making a decision.

• The weather so far this spring has hardly been beneficial for the start of practice for Putnam County diamond sports.

I imagine that the bad weather, an increase in the number of people who travel out of town on spring break and the lack of time to pursue baseball or softball at a travel level by multisport athletes have all led to the reduced numbers that many programs are experiencing.

I know South Putnam softball had a healthy turnout this year, but many other teams have had to cancel junior varsity schedules due to low numbers.

I doubt the junior varsity county tourneys for either baseball or softball will ever happen again, which is a loss for the younger player who needs at-bats and innings but isn’t quite ready yet for the varsity level.

• The boys’ state finals on Saturday did not have a lot of close games, but still offered a great day of basketball.

Morristown routed Southwood in the 1A game, while Oak Hill topped Forest Park in 2A and Culver Academies beat Evansville bosse in the 3A game.

Warren Central completed an undefeated season by winning the 4A game over Carmel, becoming the only school other than Oregon-Davis in 2007 to win boys’ and girls’ state titles in the same year.

Congrats to all the winners.

SELECTED BUT INJURED and UNABLE TO PARTICIPATE: Bennie Patterson, Tri-County