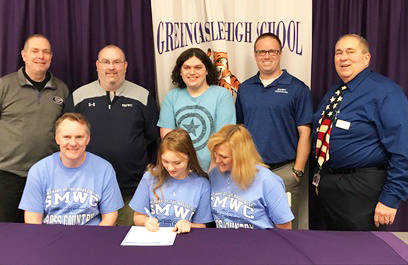 Greencastle’s Arianna Pershing was unable to compete in cross country last fall due to injury.

But St. Mary-of-the-Woods coach Zack Whitakanack didn’t forget the Tiger Cub senior’s semistate appearances during her earlier career, and added Pershing to his program’s incoming recruiting class for the 2018-19 season.

“I look forward to working with Arianna this fall and I am excited to watch her grow as a student-athlete,” Whitkanack said. “She dealt with an injury last year but is healthy and focused on making a strong comeback this fall. I think she is going to be a great fit in the SMWC cross country program.”

Pershing is excited at the opportunity to run collegiately, and thinks her absence from the sport helped rejuvenate her enthusiasm.

“I look forward to running cross country for Saint Mary-of-the-Woods College,” she said. “Running has not always been a passion of mine until I rediscovered it. My friends were all shocked to hear about my return to running, because I used to be the person who would voluntarily express my dispassion for the sport. It was after I left it that I realized how much I loved it.”

Pershing likes the peace and friendship that cross country brings.

“For me running is not about getting the best times, or getting the first-place ribbon,” she said. “It’s about freeing yourself from the outside troubles and allowing your mind to relax and think. I also came to realize that some of my best memories were from my friends on my high school cross country team. The friends that I made from running are the most incredible people and I’m truly thankful that cross country brought us together.”

It did not take her long to decide which school she wanted to choose.

“I knew I wanted to attend SMWC seconds after arriving for my campus visit,” she said.

During her early Greencastle career, Pershing was a two-time semistate qualifier and was named the team’s Most Improved Runner. She has lettered in both cross country and track and field.

Also a standout performer in Greencastle’s drama program, Pershing plans to major in English with a minor in education and theater.

In addition to her running and theatre endeavors, Pershing teaches Sunday school at her church and works as a Disney Princess for children’s birthday parties.