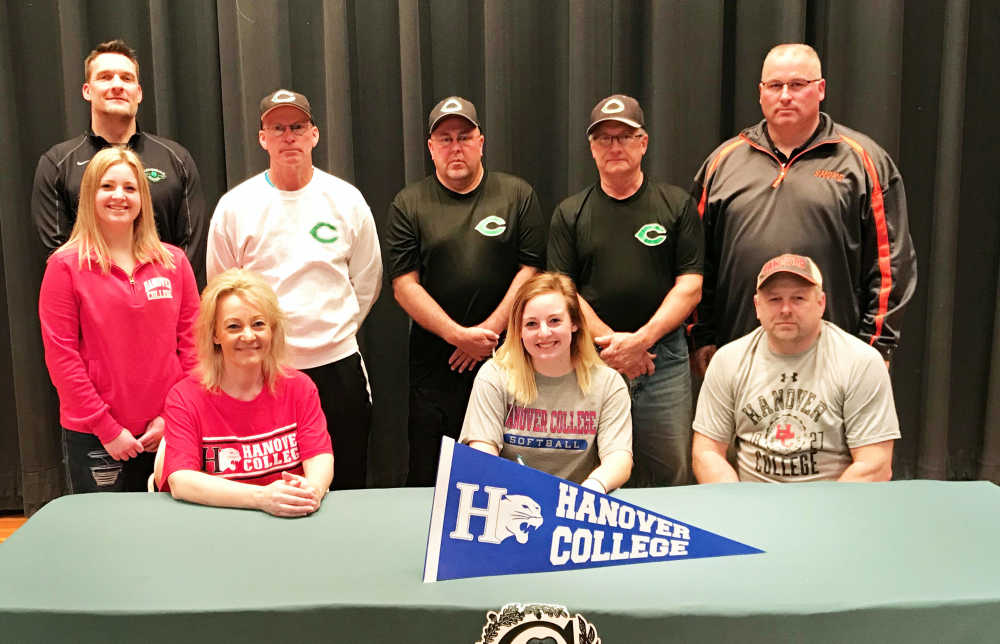 CLOVERDALE — Kiley Shedron will be taking her big bat to Hanover College next year after concluding her Cloverdale High School career this spring.

Clover coach Jim Spencer notes that Shedron can establish herself this spring as one of the top hitters in school history.

“She has started for three years for us, and played outfield as a freshman,” Spencer recalled. “She moved to third base her sophomore year. She’s in the top in in school history in several hitting categories, with a chance to become the all-time school leader in RBI.

“Kiley is a solid part of what we’ve been trying to do the past three years, and we’re looking forward to good things from her again this year.”

Spencer sees a promising future for Shedron at the next level.

“Her strong suit is her ability to hit, and to hit good pitching,” he said. “She has a nice swing and is pretty disciplined at the plate. Those things will bode well for her in college, and will allow her to help Hanover out in many different ways.

“She has played a lot of different positions for us, so she can able to help them in a lot of ways,” Spencer added. “She’s pretty well-rounded.”

Shedron also plays volleyball and basketball for the Clovers, but makes no secret that she likes softball the best and has invested the most time in it compared to her other sports.

“I’ve always wanted to play college softball,” she said. “I went down [earlier this month] to watch them play a doubleheader, and I’m really excited to join the team next year.”

Shedron attended a camp at Hanover a few weeks before getting an offer, and thinks her exact role and position could vary depending upon other recruits the team gets and won’t be known until next spring.

So far this spring, the Panthers have a 10-8 record. The Panthers were 18-14 in 2017, and made their first-ever trip to the NCAA Division III national tournament in 2016.

Hanover competes in the Heartland Collegiate Athletic Conference with other Indiana schools such as Rose-Hulman, Franklin, Anderson and Manchester.

First-year head coach Cori Collinsworth was a former player and assistant at Division II national power University of Indianapolis before taking over the helm of the Panthers.

“She said she was really excited to see what I could bring to the team,” Shedron said. “I like that Hanover is a small school with a small campus. I like the smaller communities. I stayed with one of the softball players on my visit and she was really nice. I really like the coach too.”

Shedron is ready for the weather to break and for her team to begin its season next week.

The Clovers lost some key players to graduation, but have several others back again.

“I think we’ll be OK,” she said. “We’re looking forward to getting started with playing games.”