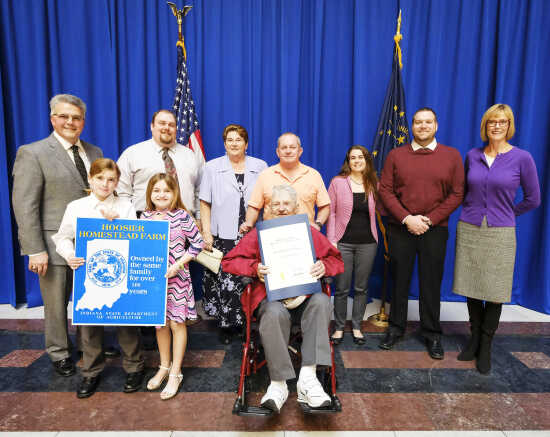 GROVELAND — Five generations and 136 years on the same piece of farmland is about a lot more than numbers.

That kind of longevity comes from staying the course through the ups and downs that agriculture brings.

Kenneth Wayne Mason — and four generations of his family before him — have done just that on their family homestead north of Groveland since 1882. For the accomplishment, the Mason family is among 65 family farms honored with a Hoosier Homestead Award during a recent ceremony at the Indiana Statehouse.

Wayne and his family received a Centennial Award for 100 or more years of ownership by the same family.

“We’ve been through our trials and tribulations,” Mason said. “We had a tornado in 1973. It wiped out all the buildings, but left the house. We had to start over with newer style buildings.”

That particular trial came rather early in Mason’s life and may have been enough to have others seeking employment in something less risky.

However, Mason continued to see opportunity in the land, a lesson he’s tried to pass on to his own children.

“I’ve tried to tell my kids that it’s a good source of income — it’s just there. You just have to live with it,” Mason said.

All the same, this way of life comes with its share of tests and changes. Mason’s grandfather once raised cattle on the land, and he raised hogs until the price of pork dropped drastically 15 or so years ago. Raising pigs became a matter of too much effort and expense for nearly no return.

“You were doing all the work and not getting anything out of it,” Mason said. “You could sell the corn and get more out of it.”

Now the Masons raise corn and soybeans on about 350 acres, 90.5 of which are the honored homestead.

For most of its 186-year history, the homestead would have been known as the Shepherd farm, Wayne’s mother’s maiden name. He took over directly from his grandfather after his mother’s untimely death at a young age.

“It’s been through four generations, five if you count my mother,” Mason said.

He hopes that can continue for more years and generations.

Mason and wife Kris hope to pass the land on to their children — Brian Mason and Wendy Walker — with an eye already on the another gneration.

“I’ve got a son and a daughter and two grandkids that we plan on passing it down to,” Mason said. “It’ll be the grandkids who’ll hopefully get it to the 200-year mark.”

“Indiana agriculture keeps our economy thriving, and each year we are reminded of how rich our history is by the long list of award recipients,” Crouch said. “Because we have such a thriving farming community, Indiana is at the top of the nation for production and these long-standing farms keep us moving forward.”

To be named a Hoosier Homestead, farms must be owned by the same family for more than 100 consecutive years, and consist of more than 20 acres or produce more than $1,000 of agricultural products per year. Since the program’s inception in 1976, more than 5,000 families have received the Hoosier Homestead Award.

“For more than a century, these farming families have been providing Hoosiers and Americans with the food, fuel and fiber they need for their everyday lives,” Kettler said. “Each generation has learned to adapt and evaluate how to keep their farm successful with changing times and technology. It was an honor to celebrate them at the Statehouse.”

The Shepherd and Mason family have been able to meet these challenges, which Wayne recognizes as no small task.

“It is an accomplishment because you have to make sure everything works right, have your finances in order and everything to keep it going,” Mason said. “It does take a lot of work to keep a farm up and running -- financially and physically. It’s quite an accomplishment to get this honor.”