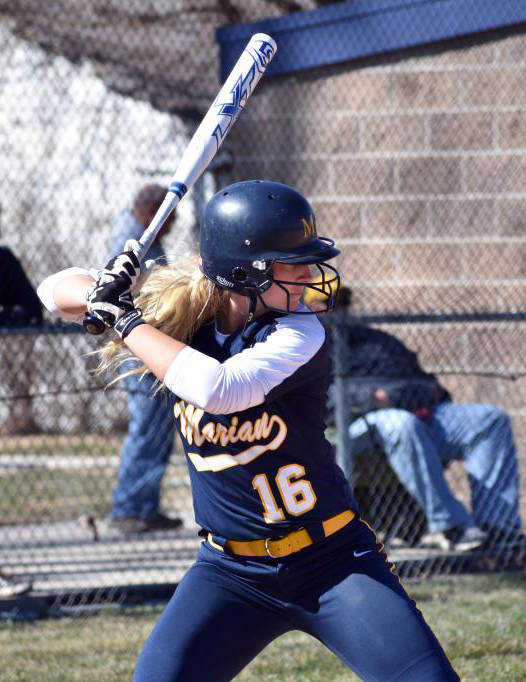 INDIANAPOLIS — South Putnam graduate Katie Hewitt has emerged as a standout for the Marian University softball team in her sophomore year.

She has walked seven times, while striking out only six times, and has successfully fielded 33 of 36 chances.

On Monday, Hewitt had a huge day as the Knights swept a doubleheader at No. 10-ranked Indiana Wesleyan.

Hewitt was 0 for 2 at the plate in the first game as Marian won 3-0, but Hewitt stepped up big time in an 8-6 win in the nightcap.

After Marian’s first two hitters reached to start the inning on a single and walk, respectively, the Knights were in a good spot.

A one-out double from the red-hot bat of Mackenzie Reeder drove in Lanie Horen from second, scoring the first run of the game for Marian.

The sophomore then belted a grand slam, her second home run of the season, to give the Knights a 5-2 lead.

Indiana Wesleyan added two runs in the bottom of the third to cut the Marian lead to 5-4.

Hewitt again keyed a rally in the fifth inning. Issy Hoyt singled to open the inning, and one out later Hewitt doubled to left center.

Both pinch-runner Serena Glenn and Hewitt advanced on an error, with Glenn scoring to put the Knights ahead 6-4.

Indiana Wesleyan tied the game with two runs in the bottom of the fifth inning, but Marian pushed across two more runs in the top of the sixth and held on for the victory.

The Knights had a scheduled doubleheader at Indiana-Southeast postponed on Wednesday, but are scheduled to travel to Goshen College today for a doubleheader and then host Taylor on Saturday at 1 and 3 p.m. in a pair of Crossroads League twinbills.

The Knights are tied for first in the Crossroads standings at 8-0 with Mount Vernon Nazarene.