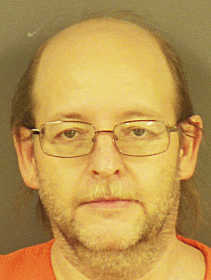 The man who shot a former Cloverdale Police officer in December 2016 has agreed to plead guilty to attempted murder.

Jeffrey Hunter, 50, will be sentenced for the Level 1 felony in Putnam Circuit Court on April 12.

A scheduled jury trial was vacated.

In agreeing to plead guilty to a Level 1 felony, Hunter faces a sentence of between 20 and 40 years with an advisory sentence of 30.

On Dec. 10, 2016, Hunter shot at Officer Luke Brown’s chest with a shotgun from about a foot away.

Brown’s ballistic vest saved him from serious injury. He was able to return fire, wounding Hunter in the torso.

Brown, who is now an officer for the Greencastle Police Department, even rendered first aid to Hunter until paramedics arrived.

The officer was even honored in January as a “survivor” by the maker of the ballistic vest that saved his life.

He reportedly stole a chainsaw valued at $369.99 from the retailer after his credit card was denied.

Hunter is alleged to have battered a clerk on his way out of the store and also to have fled in his pickup from Lt. Donnie Pettit of the Putnam County Sheriff’s Department.

Finally, with four officers on the scene at Hunter’s house on County Road 375 South, he struggled physically with Officer Brown before grabbing the shotgun and firing.