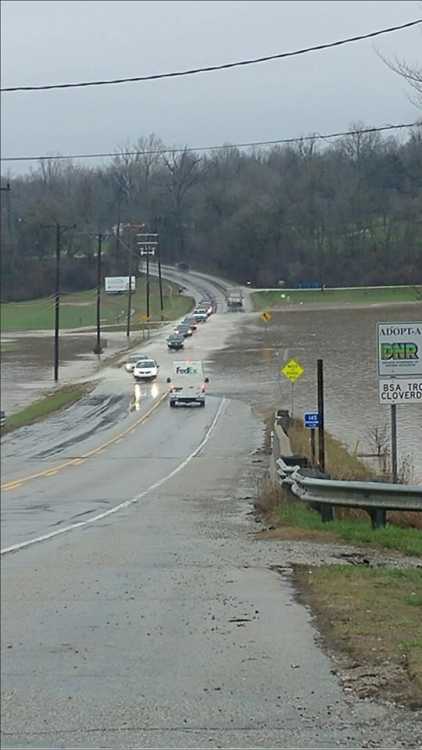 Only three days into April 2018, the new month has spawned its third precipitation record for central Indiana. 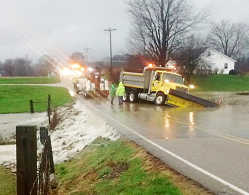 One day after waking up on Monday to find that Sunday, April 1 had deposited a record (for both April 1 and Easter Sunday) three inches of snow on cars, trucks and grassy areas around Greencastle, central Indiana established another record on Tuesday.

In excess of 3.5 inches of rain fell on the area Tuesday, making April 3, 2018 the wettest April day ever in Indiana.

Previously in central Indiana, the wettest day on record in a month known for its showers was April 19, 2011, the National Weather Service reports, when 3.06 inches of rain was recorded at the Indianapolis International Airport.

By 8:30 a.m. Tuesday, Putnam County weather observer Diana Foust had logged in 3.26 inches of rainfall, and it was still raining. And it rained again in earnest at least twice more during the day, including a thunderstorm that produced a major lightning strike near downtown Greencastle and a tornado watch for Putnam County about 7:45 p.m. 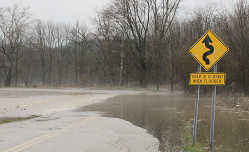 Often a trouble spot during heavy rain, Dunbar Road has water across it early Tuesday afternoon.

That’s the storm in which a member of the public later reported spotting a possible funnel cloud along State Road 42 at Cloverdale about 8:10 p.m. There was no immediate confirmation from law enforcement officials.

Throughout the day flooding was an issue with such main thoroughfares as U.S. 231 (just north of U.S. 40) and State Road 42 being closed by high water. Floodwaters were out over the roadway south and east of the Dunbar Bridge and near Crowe’s Bridge among other locations impacted by the flooding.

So the first three days of April in Indiana have produced sleet, snow, lightning and thunder, flooding, a high temperature of 66 degrees, a tornado watch and even a possible funnel cloud.

And we’re not done yet, temperatures in the 20s, with more rain and snow showers predicted, lie ahead for the rest of the week. 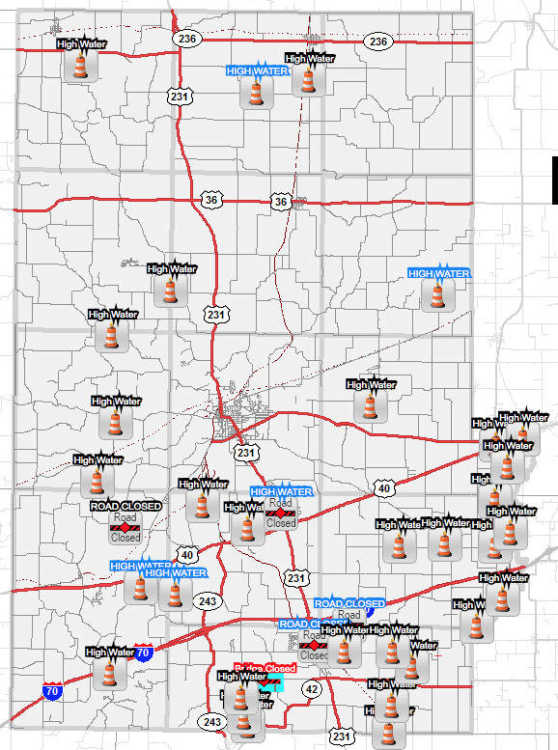 A GIS map shows road closures and high water reports around the county as of 12:36 p.m. Tuesday. For a up-to-the-minute reports of road closures, visit https://putnamin.wthgis.com/. 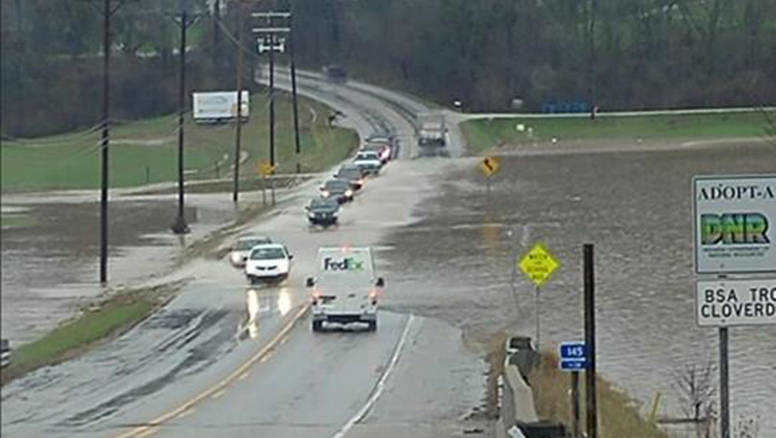 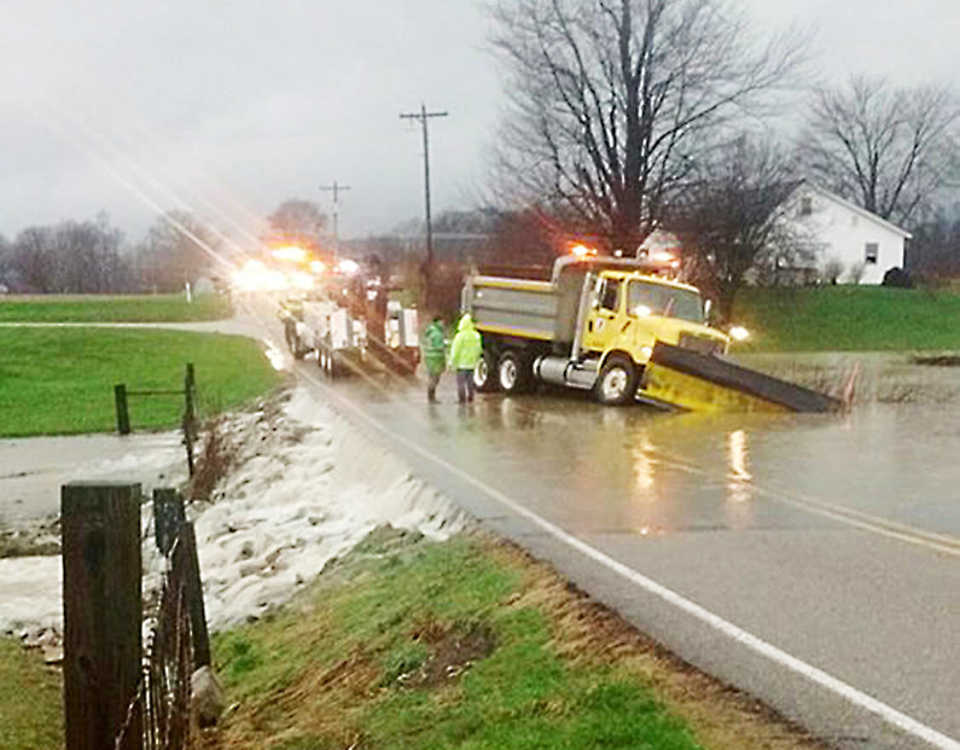 The record-setting rain also caused an INDOT driver to drive off the road on State Road 42.
Courtesy photo 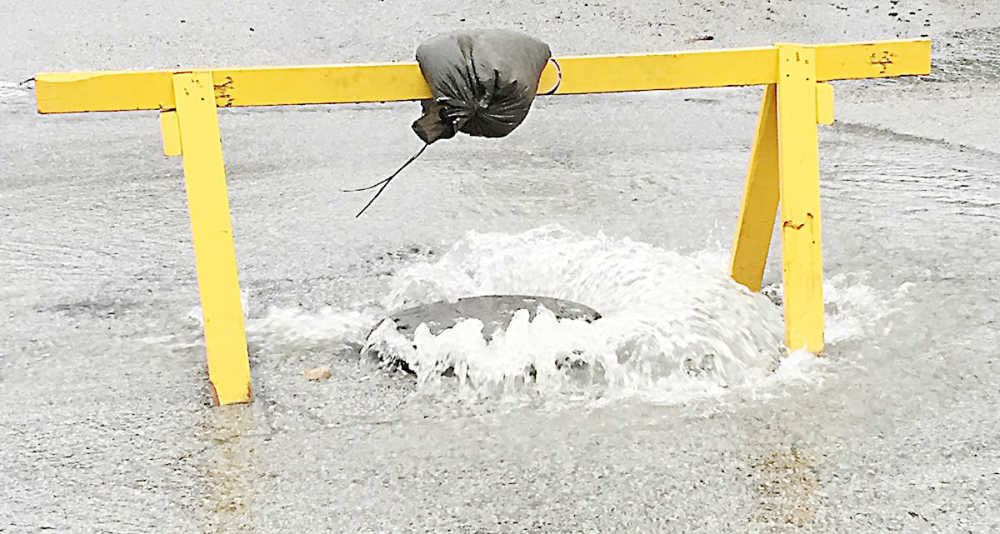 It also overwhelmed Greencastle’s storm sewers.
Staff photo
Comments
View 3 comments
Note: The nature of the Internet makes it impractical for our staff to review every comment. Please note that those who post comments on this website may do so using a screen name, which may or may not reflect a website user's actual name. Readers should be careful not to assign comments to real people who may have names similar to screen names. Refrain from obscenity in your comments, and to keep discussions civil, don't say anything in a way your grandmother would be ashamed to read.
Respond to this story