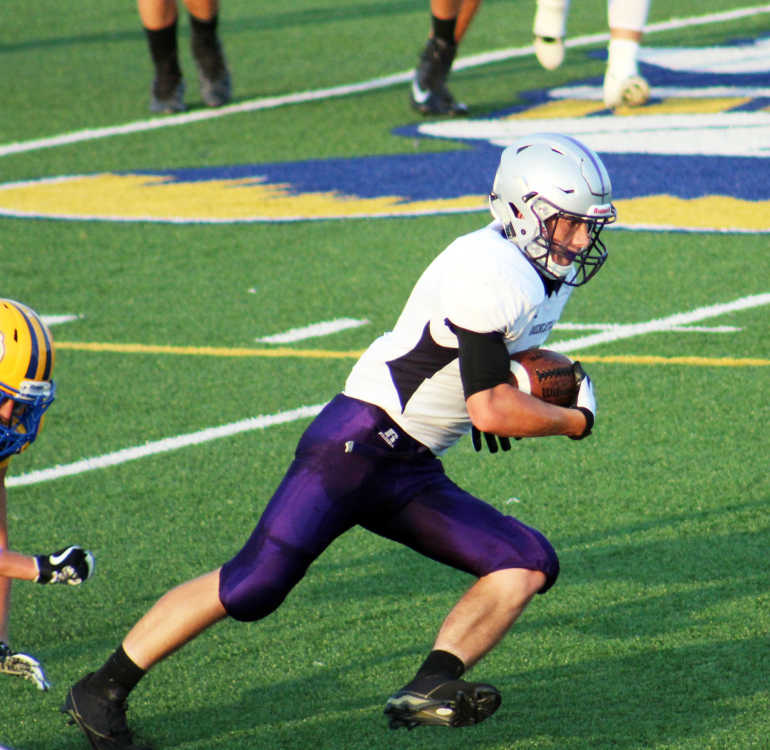 Abe Wade is a senior at Greencastle who participates in football and baseball. He previously competed in basketball.

Banner Graphic: How important are sports to you?

Abe Wade: “Sports are a huge part of my life. I grew up playing them, and my first memories as a kid are from playing sports. They have taught me to persevere through hard times, and you don’t really get that if you don’t. Last year in basketball I got mononucleosis and I was out for a month of the season. I was able to come back and played the rest of the year.”

AW: “I like hitting people in football, taking out my aggression from school. Baseball is a lot different. I have always loved watching the game, and I like that is different than football. You get to relax more and let the game come to you.”

Banner Graphic: Describe your football and baseball careers to this point.

AW: “The first two years of football didn’t go well, but the last year the seniors made it mandatory for everyone to go to lifting and workouts. It wasn’t OK to miss things. We really busted our butts to keep getting better and start winning. The work really paid off. I hope baseball is going in the same direction. We haven’t had a good record but we’ve been getting better every year. Hopefully we keep that going this year. We have a really good freshman class coming in, and this is the first year that we’ve had a lot of pitching depth. It was nice weather before spring break and we had lots of good practices, but since then it’s pretty bad and hard to get as much done.”

Banner Graphic: What are your plans for after high school?

AW: “I am going to Wabash College to study either pre-med or economics and to play football. I would like to be a physical therapist. I hurt my back in football a couple of years ago, and it was a cool process to get it back in shape. I took economics this year in the first semester, and I enjoyed the concept of learning about money and how it works. I’ll take classes in both areas at Wabash and see how that works out.”

Banner Graphic: What kinds of non-sports things do you do at school?

AW: “I am a member of ambassadors, and I really like that. We work the plays, choir concerts and band concerts and hand out programs and help people find things they need. I like it because I can put on a different face in the community; most people see me just as an athlete.”

Banner Graphic: What kinds of things to you like to do when you’re not at school?

AW: “We attend Bethel Church in Greencastle. I like to hang out with friends, play video games and listen to music. I like to play sports video games and Fortnite. In music, I like rap and country. That may seem kind of weird, since they are from different genres, but it just depends on my mood. On game day, I listen to rap to get pumped up; I’m not listening to country then. On TV, my favorite show is ‘The Office,’ and my favorite movie is ‘Remember the Titans’.”

Banner Graphic: What is something you have never done before that you would like to do someday?

AW: “I would like to go to all 30 major-league baseball stadiums. I’ve been to five, so I have 25 left to go. That would be great to do, but really expensive.”

Banner Graphic: What is your greatest fear?

AW: “Snakes. I’ve never been bitten by one, but I just don’t like them. I have never even seen one.

Banner Graphic: What are your favorite and least favorite foods?

Banner Graphic: Have any certain teachers or classes helped you at Greencastle?

AW: “Mr. [Nate] Bryan, my economics and football coach, has been really helpful. Mr. [Jimmy] Beasley was my eighth-grade basketball coach. He first put a good work ethic in me.”

Banner Graphic: Do you have pets?

AW: “I have a dog named Hoosier. He’s a three-year-old Jack Russell terrier. He’s pretty hyper and he barks a lot. He seems like a big dog, but he’s small when you see him.”

Banner Graphic: “If you could describe your personality in one word, what would that be?

AW: “Selfless. I am not really about making myself look good. I would rather have the team and others look good around me.”

Banner Graphic: Have you thought about where you want to live after college?

AW: “I would like to stay around Greencastle. Being close to my family is important to me, so I’d rather be around them. There is a physical therapy office in Greencastle; maybe I could run it someday.”