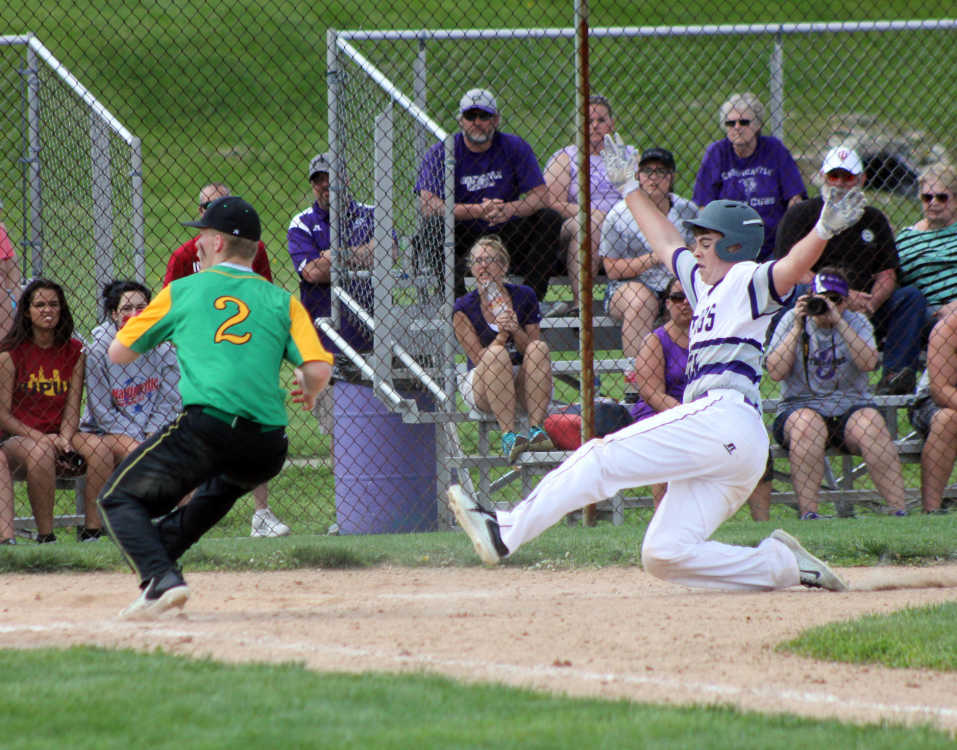 Cloverdale pitcher Parker Watts waits for a throw to try to get out Greencastle’s Gus Manion.
Banner Graphic/JOEY BENNETT

Weather has not been kind to Putnam County high school baseball teams in the early part of the 2018 season.

Once the rains slow down and the temperatures rise, however, all four county squads are optimistic for good seasons.

North Putnam has won the county tournament the past two seasons, and will host a sectional this year that includes both Cloverdale and South Putnam.

Monrovia, South Vermillion and Fountain Central round out the field.

Here is a look at each county school:

“We will be a young and inexperienced team this year,” NP assistant coach Chris Geeser said. “We lost our top three players and pitchers from last year due to graduation. We also lost two of our returning players due to ACL tears.” 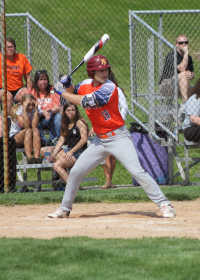 “We will rely on those two seniors and Drew Davis [also a senior] to be leaders to help guide our inexperienced team,” Geeser said. “We also have a nice group of experienced juniors returning in Evan Davies, Kolton Thorson and Cole Shoemaker.”

Geeser noted that several new members have joined the team.

“After that group, we have a lot of seniors who are playing baseball for the first time,” he said. “There is a lot of athleticism there, but we need to see how it translates to baseball. We do also have some talented underclassmen in that will be thrown into action for us this year.

“We think it will be a learning year for the young Cougars, but also a season that could be interesting if they pick up the game faster than expected. “

Geeser does not know exactly how things will turn out, but knows one thing for sure.

“We will have fun playing the game of baseball,” he said.

Second-year head coach Ben Wells saw a lot of progress in his first Tiger Cub squad a year ago, and looks to see that improvement continue this year.

“This year we have a great mix of veteran leadership coming back, while mixing in a strong group of underclassman who will be asked to contribute right away,” Wells said. “We are anchored by our three seniors — Abe Wade, Gus Manion and Jacob Harris.”

Wells notes that he also has a deep junior class that comes back after experience a lot of varsity innings as sophomores — players such as Alex Costin, Tanner Sanders and Trey Wood, with Noah Alexander and Austyn Pingleton being added to that mix.

Wells also looks for big things from his most experienced sophomore.

“Jordan Meyer is now a sophomore who played second base from day one last year and has shown a lot of growth,” he said.

Wells said what makes this year’s team different is that he will be relying on several freshmen to step and contribute right away.

“We are expecting Brody Whitaker, Nick Sutherlin, Ethan Maier, Brandon Glaze and Bryce Barger to all step up and provide quality innings right away,” Wells said. “We will rely heavily on the pitching of Abe Wade, Alex Costin, Tanner Sanders and Gus Manion since they have the most varsity experience, but we have some young arms that we have high hopes for [such as lefty Alexander, Glaze and Sutherlin].”

Wells likes the makeup of this year’s team, and he has enjoyed his time with them so far in spite of the weather issues.

“This year’s team has been awesome to coach and they have come to practice every day wanting and working to get better,” he said. “They are a great group of young men who play the game the right way. I am really looking forward to seeing how they progress throughout the year.”

The Eagles of coach Brady Rhodes also made great strides last season, and are looking to see that trend continue.

“We are returning most of our varsity squad from last season [only graduating three seniors] and we are expecting a strong showing out of our incoming young freshmen and sophomores,” Rhodes said. “While being a young team, we also have some key leaders returning.”

Rhodes is pleased to have been able to have named senior Dylan Crum as team captain.

“I have never done this as a coach in my career thus far, but Dylan’s leadership, sportsmanship, and work ethic are excellent,” Rhodes said. “He’s also a good ball player, but more important than that, he’s a great young man.” 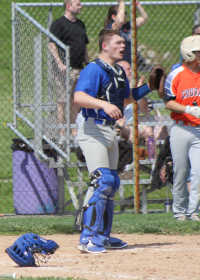 Aidan LeBlanc directs his defense on where to throw the ball in last year's county tournament.
Banner Graphic/JOEY BENNETT

Also returning as a key senior is Hunter Croan, who Rhodes said “provides an electric energy in the dugout and on the field that’s infectious amongst our team.”

Rhodes has been with this year’s seniors as head coach for all of their previous years of action, and feels that relationship has helped to make this year especially promising.

“After three years of coaching this group, I feel like our baseball knowledge has greatly increased over the years,” Rhodes said. “That camaraderie, connection, and growth is going to be vital to our success this season. Additionally, I am fully confident in my coaching staff and the wealth of knowledge they bring to the table. Coach [David] Wood has been with me the last two years and his experience, baseball knowledge, and work ethic have been vital to the growth of our program.”

Rhodes and his team have set lofty goals which they think they can reach.

“While we are a young team, I fully expect us to compete for a county championship and a sectional this season,” he said. “Those goals are not out of our reach and our team has identified those as goals to shoot for this year.”

Longtime Northview assistant coach Kent Bass takes over the Clover program and has a strong returning pitching staff to build around.

Senior Nick Winders is a crafty left-hander, while junior right-handers Parker Watts and Jarron Rossok have each logged a lot of innings in their young careers.

The Clovers only list 14 players on their roster, but eight of them are seniors.

Watts and Rossok are joined in the junior class by Nik Hull, while Caydhan Stevens and Jack Havenor make up the roster’s sophomore class and Brayden Blevins is the team’s lone freshman.