Group estimated at 120 assembles on north side of the Putnam County Courthouse in peaceful community anti-racism rally Saturday evening. A gallery of photos from the rally appears elsewhere on this website. Banner Graphic/ERIC BERNSEE

As a mild Indiana spring evening brought bustling business to Greencastle's downtown Saturday with diners filling local eateries, a couple of Greencastle and Cloverdale prom-goers took the opportunity to use the courthouse and its surroundings as backdrop for a Kodak moment.

In between, however, a more serious event aimed at posterity was unfolding. Dozens of community members, responding to events of the past week in town and on the campus of DePauw University, staged a peaceful protest against racism and its accompanying climate of hate by marching 120 strong with signs and chants like "Silence is violence" and "Black lives matter" from Gobin Memorial United Methodist Church to the north side of the Putnam County Courthouse.

In a statement provided to the Banner Graphic, organizers of the community anti-racism march explained their motivation.

"We are gathering today to break the white silence coming from our community," the statement began. 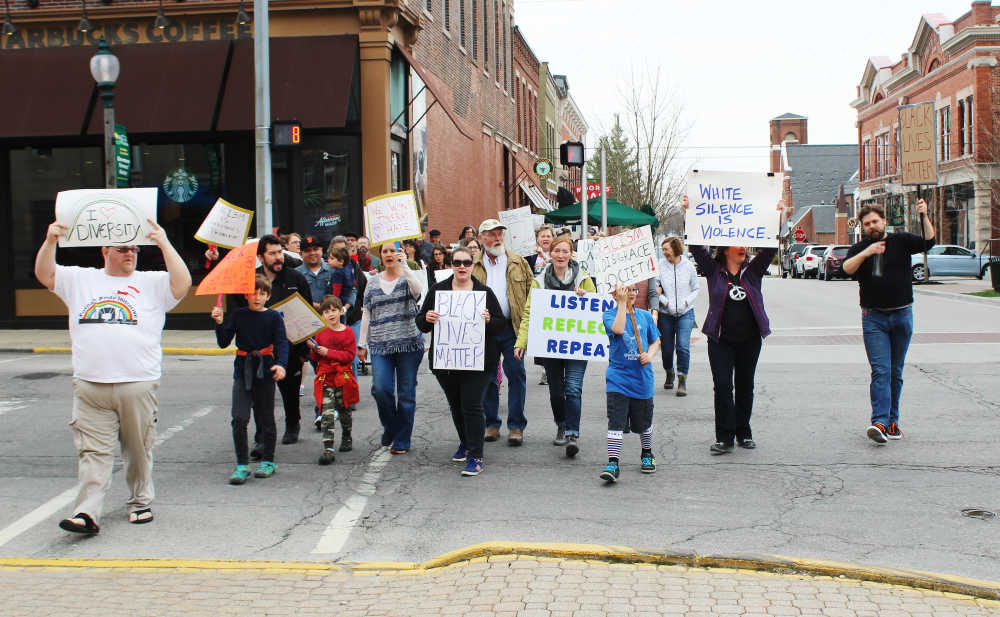 Community marchers cross Washington Street, chanting "Silence is violence" and "Black lives matter," as they make their way to the north side of the courthouse for an anti-racism rally Saturday evening. A gallery of photos from the rally appears elsewhere on this website. Banner Graphic/ERIC BERNSEE

"Members of our community -- both on and off campus have been targeted and threatened. We will hold ourselves, one another and our government accountable for speaking out, speaking up and interrupting racism.

"There should be no place for hate in Greencastle," the statement concluded.

And that conclusion permeated remarks made from the courthouse steps.

"Hatred has no place in this city or this university," City Councilman Wade later stressed. "However, if the last week has taught us anything, it is that unfortunately, hate is still alive. Nevertheless, we do not have to allow hate to make its home in Greencastle.

"Let us make sure that hate was an unfortunate, temporary visitor, and let us drive it out of town by loving each other a little stronger, listening a little deeper, and trying a little harder to see the best in everyone."

Wade urged that residents to not let the march and rally be the end of community involvement.

"But let us resolve to continue the conversation in our homes, churches, schools, and businesses once we leave," he said, characterizing the prior week as a tough period for the city.

"I know many of you are tired," he said. "I know many of you are scared. The events of the last week have been exhausting. No one should have to face the hateful and cowardly acts our city and university have encountered. However, I hope that, in the midst of these unfortunate events, we can find a glimmer of hope for a better tomorrow. I hope that, in the tension of this moment, we can open the door for a conversation and begin the process of healing this community."

"In his address, Dr. King said, 'Black supremacy is as dangerous as white supremacy, and God is not interested merely in the freedom of black men and brown men and yellow men. God is interested in the freedom of the whole human race and the creation of a society where all men will live together as brothers, and all men will respect the dignity and worth of all human personality,'" Wade noted. "I hope that describes the kind of community we have here in Greencastle, but I know that for many King's words from 58 years ago bring into contrast how our community, our country and our world have fallen short of realizing that dream."

Wade, who has lived in Greencastle most of his life, said he loves the city for its "awesome mix of people who live here."

"I love that on a Saturday night you can go into a restaurant and see college students sitting next to professors who are sitting next to factory workers and schoolteachers and farmers and artists and plumbers," he said. "That is the strength of our community. However, it can also be our weakness. Sometimes we come from so many different backgrounds and world views that we talk past each other and forget to listen. And listening requires loving one another. A community is like a family -- and in a family, you don't have to like each other, but you do have to love each other. And love is what this community needs right now."

The city councilman called upon all residents "to show love and wisdom and compassion toward one another."

Wade then urged residents, city officials and state leaders to do their part.

"I call upon us all to not let this tension go to waste," he said, "but to use it as an opportunity to force our families, our friends and our neighbors to have difficult conversations.

"I call upon us all to push Mayor Dory and my fellow members of the City Council to adopt legislation that outlaws discrimination in the City of Greencastle," he said to an outburst of applause, then continuing to urge that Gov. Holcomb and the Indiana General Assembly adopt a statewide hate crimes law to enhance sentences for those who commit crimes, intended to spread fear among marginalized peoples.

Alexander, who opened the public remarks, said that a safer community is "one that holds itself accountable."

Instead, we must be accountable, she reiterated, suggesting that education and training would be helpful "for our police, our community and ourselves."

"We need to do the work, we need to stand up," she concluded.

Mayor Dory, meanwhile, pledged that the city "will not be deterred by racist and ugly actions."

Noting that the city strives to "be welcoming and inclusive," Dory said he and the City Council are researching "several actions to be announced within the next couple of weeks" to help Greencastle continue "to grow and be better neighbors."