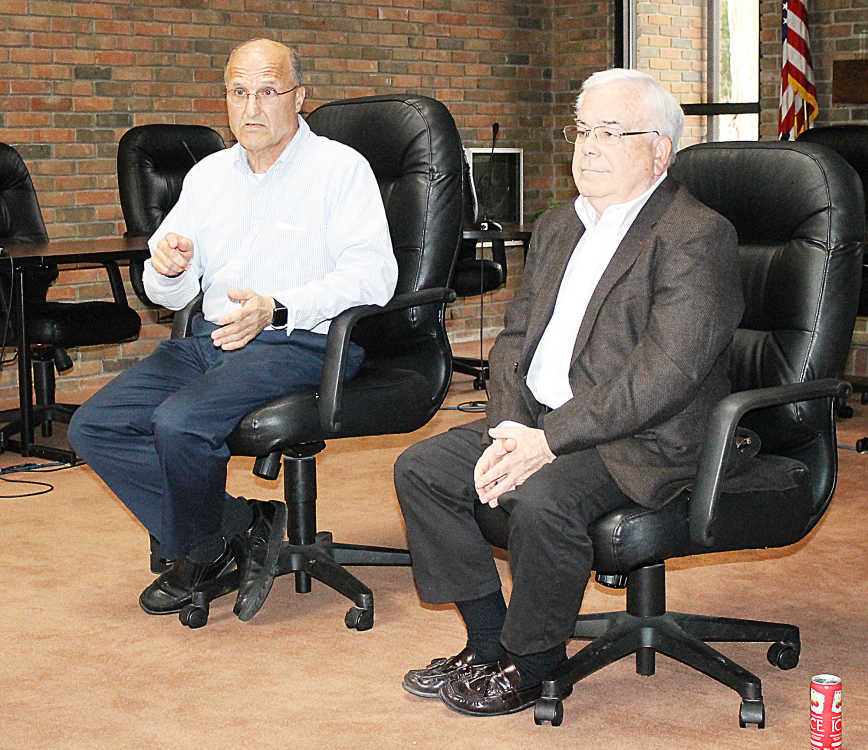 Defining what a county council does in Indiana is relatively easy.

However, really pinning down the considerations that go into the job of the county’s seven-member fiscal body is a bit more complex.

Gick and County Council President Darrel Thomas attempted to shed some light on these kinds of questions during the conversation, the sixth installment of the Community Conversation series sponsored by the Greencastle League of Women Voters, the Putnam County Public Library and the Greater Greencastle Chamber of Commerce.

The two men emphasized that the county doesn’t exactly run in the traditional executive-legislative-judicial balance of powers model we all learn in government class.

Instead, the Putnam County Commissioners serve as both the executive and legislative branch, while the council is the fiscal body, controlling the county’s proverbial purse strings.

And then there are the elected officials in charge of many of the county’s department, operating alongside but not necessarily under the authority of the commissioners or council.

“County government is a set of fiefdoms,” Thomas said, “and each one has its own king.”

The result is a series of ever-evolving challenges that arise each month when the council meets.

“Every meeting we have situations where we cannot do the county’s business because we cannot be sure if the money is coming from the right pot,” Thomas said.

They are assisted in this task by Putnam County Auditor Lorie Hallett, but even she must often turn to state offices such as the State Board of Accounts or the Department of Local Government Finance for the final answers.

Regardless, the fundamental challenge of the county council remains the same — balancing a desire to keep taxes low while providing county residents with the services to which they are entitled.

Such was the challenge in early 2015 when the council and commissioners were notified of the need for new 911 software at a price tag of $960,000.

While exploring options, the council began looking into establishing a Public Safety Local Income Tax (LIT) that would largely be used to fund the new software. The thought of putting a new income tax on residents didn’t always sit well with councilmen, but they were also aware that providing for public safety isn’t an optional task.

“We were at a point where we couldn’t provide certain minimal services and we had to move up,” Gick said.

“To me, public safety, in the broadest sense, is about everybody,” Thomas said.

After more than six months of discussion, the new Public Safety LIT went into effect in October 2015, adding about $75 of local taxes per $30,000 of income.

Still in effect, the LIT not only helps pay off the loan that purchased the 911 software, but the funding can also go to police, fire and emergency medical service, as well as to the fire and police entities not under the county umbrella.

Greencastle Mayor Bill Dory, in attendance on Wednesday, spoke favorably of what the LIT funds have done for the city.

“The fact that the county stepped up and passed the Public Safety LIT is going to allow us to buy two fire trucks,” Dory said. “That’s going to cost us $2 million. It it weren’t for that, we’d be doing a bond issuance.”

The mayor added that caps on local revenue and caps on individual pieces of property make property taxes a limited source of income these days.

“We don’t get a fully funded budget and we have to fill those gaps,” Dory said.

It’s a challenge the county shares, with the council trying to fill those gaps while trying to provide better roads, fix technological challenges to county offices and try to pay county employees a little more.

“We didn’t get to give raises last year to county employees and that frustrates me,” Gick said.

There’s also the looming fact that the county has already outgrown the Putnam County Courthouse and that county offices are spread around various Greencastle locations.

“I think at some point the county has to come to grips with the need for an annex,” Gick said.

This, too, will come with a high price tag, but Thomas, set to retire at year’s end after 16 years on the council, said the county is as close as it’s ever been to being able to move forward with a new annex.

Both men emphasized that there is good news to highlight in the county meeting its challenges. These include the Putnam County Sheriff’s Department agreeing to a partnership with Vigo County that will bring inmates and income to the jail.

They also include the public-private partnership through which the sheriff’s department and the Humane Society of Putnam County have kept the doors of the Putnam County Animal Care and Control Shelter open for the last several years.

“It’s not been easy all the time but I think it’s been a good solution,” Gick said.

The next session of the Community Conversation series has not yet been announced.