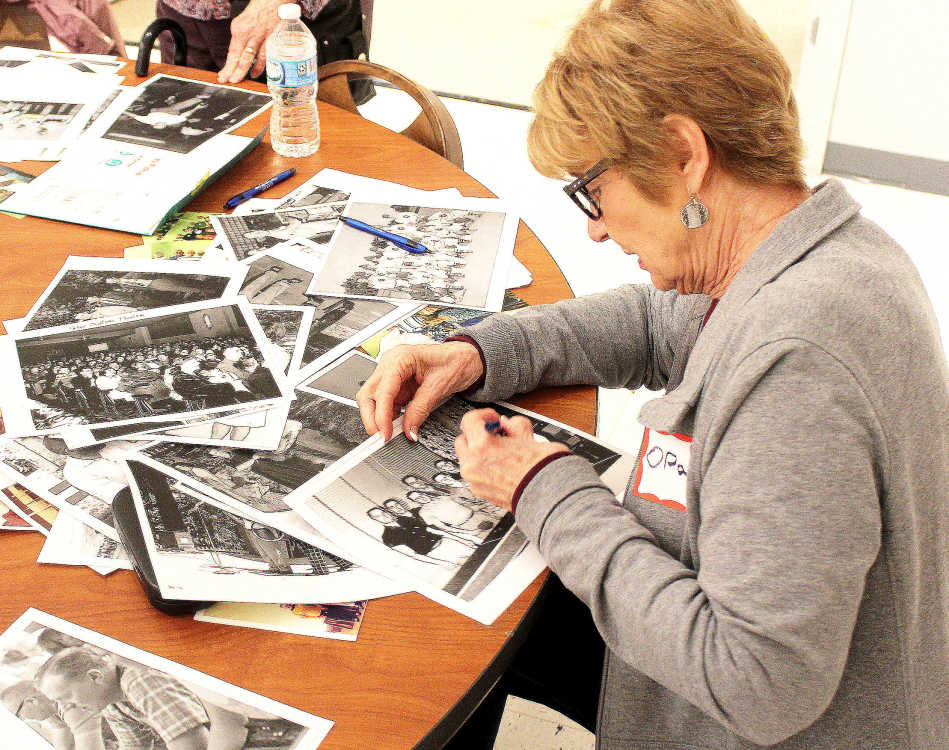 The Putnam County Museum dished up a double dose of nostalgia -- with a side order of legendary coney sauce -- earlier this week.

With about two dozen IBM Corp. retirees volunteering to help identify people in hundreds of Big Blue-related photographs donated to the Putnam County Public Library, the museum hosted an event that treated them to an authentic Mahoney’s Coneys lunch ala the old B-K Root Beer stand.

The trip down memory lane was inspired by PCPL archivist Tony Barger, who when he came to the library five years ago, inherited “about three cubic feet of boxes,” all tightly packed with photographs chronicling the IBM years in Greencastle, 1954-1987. 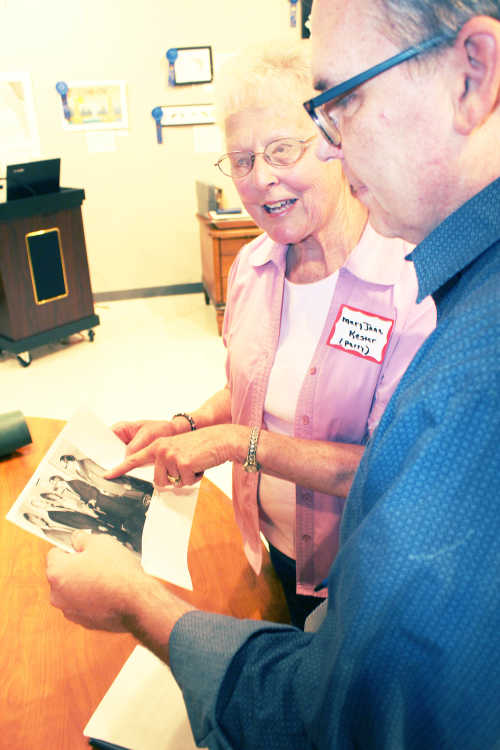 Mary Jane Kester, finds a shot in which she is pictured. Kester explains to PCPL archivist Tony Barger -- who is spearheading the project involving 2,000 IBM photos donated to the library -- that she is receiving some kind of award in the photo, which includes her father, Denny Perry, and plant manager Bill Long, among others.
Banner Graphic/Eric Bernsee

“I wasn’t all that interested in them originally,” admitted Barger, who noted that most of the photos were clearly professionally taken. “Now it’s my favorite project.

“It’s only when I saw all those pictures that I understood the significance of IBM to Greencastle,” he noted.

Barger credits library patron Melissa Green, whose husband worked at IBM, with motivating him to tackle the project. 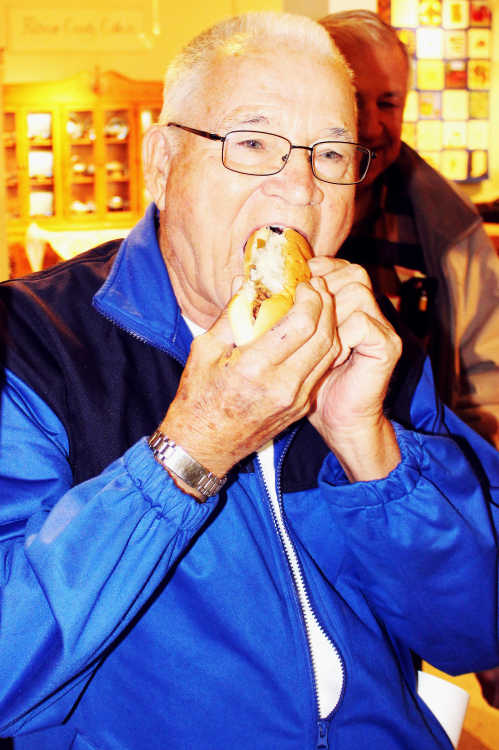 Getting to take the first bite of a Mahoney’s Coney during a special event earlier this week at the Putnam County Museum, Greencastle IBM retiree Al McClure enjoys the taste of the legendary local treat served up by Marge Mahoney Miller.
Banner Graphic/Eric Bernsee

“She made me look at them,” Barger said. “I pulled them out and it’s been a project ever since.”

He brought photocopies of some 350 of the estimated 2,000 or more pictures in his care to the luncheon event where folks like Bill Cockrell, Don Kendall, Dallas and Opal Sutherlin, Robert Crodian, Charlie Roach and Mary Jane and Jerry Kester jumped right in and began reminiscing through the images spread out in front of their eyes.

Mary Jane Kester even found a photo of herself and her father, Denny Perry, in the bunch. 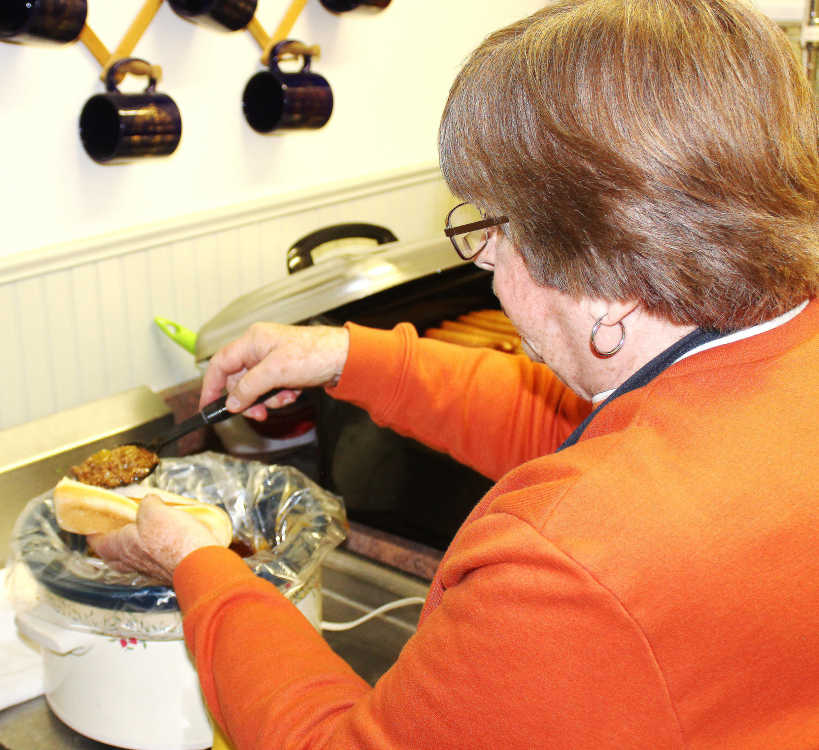 Marge Mahoney Miller whose parents created the recipe and perfected the coney at the local B-K Root Beer stand that closed in the 1970s.
Banner Graphic/Eric Bernsee

“I must have been getting some kind of award,” she told Barger, pointing out her dad, her dad’s boss, Dale Shoup; plant manager Bill Long and her manager, Augie Deacon, in the old photo.

Kester, who worked 19 years (including the last 10 as a receptionist) at the old plant on Indianapolis Road that now houses Area 30 Career Center and the Ascena Retail Group Fulfillment Center, recalled that her dad retired when many of the longtime IBMers officially called it quits after the Nov. 11, 1986 announcement that the plant was closing by March 1987.

Perry worked in shipping and receiving at the time of the photo, his daughter noted, but at the end was working out at the old Ryan Building which is now Heartland Automotive after several expansions.

“He retired in January 1987, and I lost him in July 1987. He was probably one of the best employees IBM had. IBM was his life,” Kester said.

Barger said he hoped the identification effort would help generate some interest in the old photos, many of which show IBMers undertaking recreational or family time activities, like golf, Easter egg hunts, Halloween and Christmas parties and more.

“Looking at these pictures,” Barger said, “IBM, in my opinion, did a great job of creating a community of its own people. You see the same people in a lot of photos.”

Barger invites anyone to come look at the photos at his PCPL office in the old section of the library, noting that besides identifying subjects in the pictures, he wants to get them all digitized and put online.

“I’ll make anybody digital copies that they can go and get printed at CVS or Walmart,” he added.

Barger praised the IBM group for “making a lot of headway” during the museum event.

“The memory of these people is amazing,” he said, pointing to Cockrell, who was surrounded by others awaiting his definitive word on some of the IDs.

“He seems to be the guru of memory here,” Barger added.

Retiree Don Kendall noted that many of the photos, a lot of which appeared to be from the 1950s and 1960s, were the handiwork of John Stuckey, who shot the employee events back in the company’s heyday.

“Back then they wouldn’t let you (employees) take pictures in the plant,” he said, noting that when the plant was closing piles of photos were spread out on table for employees to take home.

Kendall, who left Greencastle in 1987 to work in finance at the Mechanicsburg, Pa., plant for five years, noted that age is catching up on the retirees.

He shared lists of those who worked in Greencastle and have since passed away, noting that 515 of an overall estimated 1,200 (the plant had 985 employees at its end) who ever worked at any time at the local IBM facility, have now died.

“You look around here,” he added, ”and, sad to say, another 10 years and there won’t be anybody who can identify these pictures.”

The mood moved to a happier frame of mind when the group was called to lunch, where Marge Mahoney Miller -- whose parents, Dan and Mary Mahoney, ran the old B-K Root Beer stand (at the northwest corner of Bloomington Street and Veterans Highway) and created Mahoney’s coneys -- was dishing up the legendary Greencastle treats.

There was no divulging the ingredients in the coney sauce -- the recipe was her mother’s -- but another secret is that both the buns and hotdogs were steamed, explained Miller, who worked 17 years at IBM.

“Dad was so particular,” she said. “It was a lot of work and a lot of people don’t want to do that.”

Waiting in line for the first Mahoney Coney was Al McClure, a 30-year IBMer who now lives in Lakeland, Fla.

“I’m going to need another one,” McClure laughed.