The timing of his third appearance as a DePauw University commencement speaker was not lost Sunday on Vernon E. Jordan Jr.

After a spring punctuated by a series of racially biased incidents, it was Jordan who spoke the only words about the situation, providing the only overt message Sunday as 473 members of the Class of 2018 received bachelor's degrees at DePauw's 179th annual commencement. 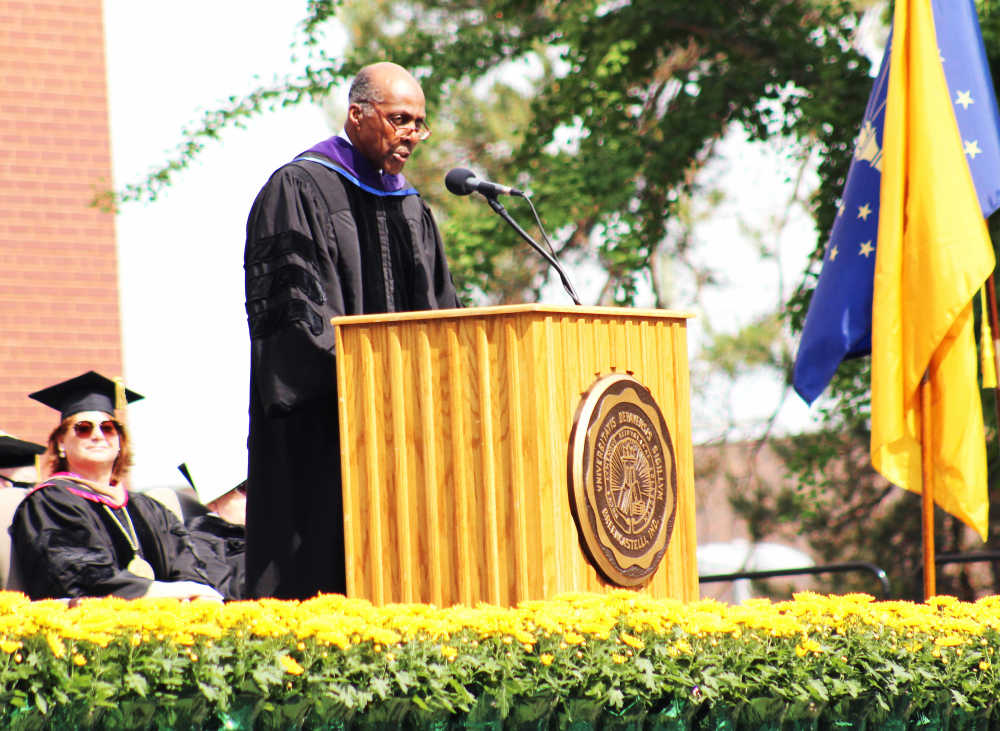 "I know I return at a difficult time for this campus," civil rights legend and presidential adviser Jordan told the gathering on Holton Memorial Quadrangle on a warm, cloudy day marred only by a few sprinkles after the presentation of diplomas had begun.

The Class of 1957 graduate said those regrettable incidents might easily have occurred when he was the lone black member of his class and one of only five African Americans on campus as the time.

"I've heard and read about the recent series of hateful incidents here -- the racist and homophobic words scrawled on bathroom stalls or spelled out with stones," the 82-year-old Jordan said of the incidents reported on or near campus this spring. "They feel like instances of bigotry that could have happened when I was 18 -- but should never happen in 2018.

"At moments like these," he added, "it seems as if we, as a country, are re-treading the same ground that was being trod when I was a student here."

Jordan recalled arriving in 1953 at his campus dorm room at 106 Longden Hall, which was to be shared by longtime friends Ray and Roy, DPU seniors from small Midwest homes. He remembers the what-have-we-gotten-ourselves-into looks on their faces when they arrived to find him as their roommate.

About two weeks later, however, Jordan returned to his room one evening to hear Ray and Roy announce that they "decided something."

When he asked what that might be, Jordan was told the young men decided he was "no different than them."

They said he fell asleep studying at his desk. He snored. And he liked beer as much as they did.

"That was the DePauw difference helping us realize we weren't so different after all," Jordan said.

Jordan noted that even though he had left the segregated South to come to the Midwest, he could not get far from the issue of race.

"When I was a student here, the black barber downtown would not cut black students' hair, which meant that when I needed a haircut, I would have to hitchhike to Indianapolis. Even when the university opened a barber shop in the Union Building, the white barber there was willing to cut my hair. And tried. Poor fella. But I had to keep hitchhiking.

"There were other things that were unwelcoming," Jordan continued. "At that time, blacks and whites could not and did not date one another on campus. It was not a written rule, but we all knew. I learned this the hard way.

"My good friend Peggy Taylor took speech classes with me, and one day after class, she asked if I would escort her to her sorority house dance. Later that night a friend from across the hall told me, 'You have created a mess at the sorority house.'"

Word got around, and Jordan got a late-night call from a tearful Taylor, saying she had to rescind her invitation.

Jordan told her, "'Peggy, I understand. That's fine with me.' But it was not fine with Peggy. She resigned from the sorority. And the experience transformed and galvanized her. She became an equal rights advocate and activist. She was then elected president of the Student Senate, made Phi Beta Kappa, and won the Walker Cup at her commencement 62 years ago."

Jordan -- today a partner at Lazard Frčres & Co. in New York, senior managing director of Lazard Group and senior counsel at Akin Gump -- said he can't think of DePauw without thinking of Peg Taylor and "her friendship, her kindness, her courage, her leadership."

"She chose to stand up to injustice," he told the commencement audience. "And by being an exception to the rule, she helped change the rule.

Jordan again alluded to the campus incidents this spring.

"So the recent incidents you have witnessed here call on everyone, not just the members of one community, to respond," he said. "How you handle challenges like this is an essential part of your education. Because this is not only your graduation day. This is your moment."

In remarks to the Class of 2018, Jordan offered, "I hope that as you leave DePauw, you choose the present, choose to be present, and present yourselves to one another -- your sisters and brothers and friends and fellow human beings -- with open arms. Because it is only when we come together and see each other that we can move forward."

Sunday marked the third time Jordan addressed a graduating class. Exactly 45 years ago -- on May 20, 1973 -- he spoke while serving as executive director of the National Urban League. Twenty years later he was back after serving as transition team chairman for President Bill Clinton, his longtime friend.

"If this was a Star Wars franchise," Jordan joked, "this would be the third installment of a trilogy: 'The Return of the Jordan.' I return because I love DePauw, because my heart bleeds black and gold. I agree with president John F. Kennedy when he called one's alma mater 'the second home of our youth' -- and since my earliest days on this campus, DePauw has been for me that second home.

"While I came here to learn political science and history," he added, "it was also an opportunity to learn about people I did not know, and people who did not know me."

He called on the Class of 2018 "to work to understand one another, to see the commonalities and forge the way forward. You might not have to share a dorm room, but we still have to share a country. And you can choose to make this country -- and this moment -- better."

"Graduates, because of you and your time here at DePauw, I have faith that you will make the most of your moment."

After Jordan's remarks, he received a surprise from President D. Mark McCoy, who presented Jordan with the Old Gold Medal on behalf of the Board of Trustees.

The Old Gold Medal, McCoy said, "is awarded from time to time by the board to individuals who have served DePauw in a unique and meritorious way, a qualification which my friend has repeatedly met."

"You represent to these graduating seniors and other members of the DePauw community the limitless, lifelong benefits of a liberal arts education," McCoy said, adding that Jordan's achievements "call upon us all to do better for the greater good."